Epic of Gilgamesh facts for kids 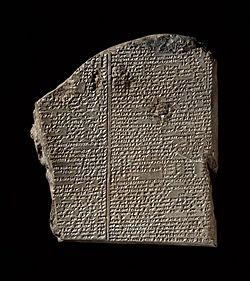 The Deluge tablet of the Gilgamesh in Akkadian

The Epic of Gilgamesh is an epic poem from ancient Mesopotamia. It is one of the earliest works of literary fiction known.

The most complete version that exists today was preserved on twelve clay tablets in the library collection of the 7th century BC Assyrian king Ashurbanipal. A series of Sumerian legends and poems about the mythological hero-king Gilgamesh were probably gathered into a longer Akkadian poem some time before the 7th century BC.

The essential story is about the relationship between Gilgamesh, a king who has become distracted and disheartened by his rule, and a friend, Enkidu, who is half-wild and who undertakes dangerous quests with Gilgamesh. Much of the epic focuses on Gilgamesh's thoughts of loss following Enkidu's death. It is often credited as being one of the first literary works with emphasis on immortality.

The epic is widely read in translation, and the hero, Gilgamesh, has become an icon of popular culture.

Gilgamesh was the fifth king of Uruk, an ancient city of Sumer. His supposed historical reign is believed to lie within the period 2700 to 2500 BC, 200–400 years before the earliest known written stories. His father was the third king, Lugalbanda.

The Epic of Gilgamesh was about him.

All content from Kiddle encyclopedia articles (including the article images and facts) can be freely used under Attribution-ShareAlike license, unless stated otherwise. Cite this article:
Epic of Gilgamesh Facts for Kids. Kiddle Encyclopedia.