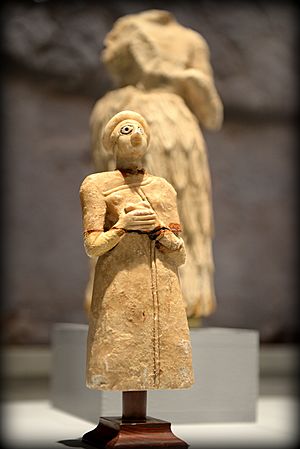 Sumerian religion was the religion practiced by the people of Sumer, the first literate civilization of ancient Mesopotamia. The Sumerians regarded their gods as responsible for everything that happens in life.

Before the beginning of kingship in Sumer, the city-states were effectively ruled by priests and religious officials. Later, kings started to rule, but priests continued to have great influence on Sumerian society. In early times, Sumerian temples were simple, one-room structures, sometimes built on elevated platforms. Towards the end of Sumerian civilization, these temples developed into ziggurats - tall, pyramidal structures with sanctuaries at the tops.

The Sumerians believed that the universe had come into being through a series of cosmic births. First, Nammu, the primeval waters, gave birth to Ki (the earth) and An (the sky), who mated together and produced a son named Enlil. Enlil separated heaven from earth and claimed the earth as his domain. Humans were believed to have been created by Enki, the son of Nammu and An. Heaven was reserved exclusively for deities and, upon their deaths, all mortals' spirits, regardless of their behavior while alive, were believed to go to Kur, a cold, dark cavern deep beneath the earth, which was ruled by the goddess Ereshkigal and where the only food available was dry dust. In later times, Ereshkigal was believed to rule alongside her husband Nergal, the god of death.

Sumerian religion heavily influenced the religious beliefs of later Mesopotamian peoples; elements of it are retained in the mythologies and religions of the Hurrians, Akkadians, Babylonians, Assyrians, and other Middle Eastern culture groups. Scholars of comparative mythology have noticed many parallels between the stories of the ancient Sumerians and those recorded later in the early parts of the Hebrew Bible. 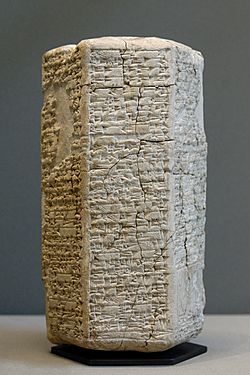 Cuneiform temple hymn from the 19th century BCE; the hymn is addressed to the Lugal Iddin-Dagan of Larsa

Sumerian myths were passed down through the oral tradition until the invention of writing. Early Sumerian cuneiform was used primarily as a record-keeping tool; it was not until the late early dynastic period that religious writings first became prevalent as temple praise hymns and as a form of "incantation" called the nam-šub (prefix + "to cast").

In the Sumerian city-states, temple complexes originally were small, elevated one-room structures. In the early dynastic period, temples developed raised terraces and multiple rooms. Toward the end of the Sumerian civilization, Ziggurats became the preferred temple structure for Mesopotamian religious centers. Temples served as cultural, religious, and political headquarters until approximately 2500 BCE, with the rise of military kings known as Lu-gals (“man” + “big”) after which time the political and military leadership was often housed in separate "palace" complexes.

Until the advent of the lugals, Sumerian city states were under a virtually theocratic government controlled by various En or Ensí, who served as the high priests of the cults of the city gods. (Their female equivalents were known as Nin.) Priests were responsible for continuing the cultural and religious traditions of their city-state, and were viewed as mediators between humans and the cosmic and terrestrial forces. The priesthood resided full-time in temple complexes, and administered to matters of state including the large irrigation processes necessary for the civilization’s survival.

During the Third Dynasty of Ur, the Sumerian city-state of Lagash was said to have had 62 "lamentation priests" who were accompanied by 180 vocalists and instrumentalists.

The Sumerians envisioned the universe as a closed dome surrounded by a primordial saltwater sea. Underneath the terrestrial earth, which formed the base of the dome, existed an underworld and a freshwater ocean called the Apsû. The deity of the dome-shaped firmament was named An; the earth was named Ki. First the underground world was believed to be an extension of the goddess Ki, but later developed into the concept of Kigal. The primordial saltwater sea was named Nammu, who became known as Tiamat during and after the Sumerian Renaissance.

According to Sumerian mythology, the gods originally created humans as servants for themselves, but freed them when they became too much to handle.

The primordial union of An and Ki produced Enlil, who became leader of the Sumerian pantheon. After the other deities banished Enlil from Dilmun (the “home of the deities”) for offending the air goddess Ninlil; she had a child, Nanna, god of the moon. Nanna and Ningal gave birth to Inanna, the goddess of war and fertility, and to Utu, god of the sun.

The Sumerians originally practiced a polytheistic religion, with anthropomorphic deities representing cosmic and terrestrial forces in their world. During the middle of the 3rd millennium BCE, Sumerian deities became more anthropocentric and were "...nature gods transformed into city gods." Deities such as Enki and Inanna were viewed as having been assigned their rank, power, and knowledge from An, the heavenly deity, or Enlil, head of the Sumerian pantheon.

This cosmological shift may have been caused by the growing influence of the neighboring Akkadian religion, or as a result of increased warfare between the Sumerian city-states; the assignment of certain powers to deities may have mirrored the appointment of the Lugals, who were given power and authority by the city-state and its priesthood.

The earliest historical records of Sumer do not go back much further than c. 2900 BC, although it is generally agreed that Sumerian civilization started between c. 4500 and 4000 BC. The earliest Sumerian literature of the 3rd millennium BC identifies four primary deities; Anu, Enlil, Ninhursag and Enki. The highest order of these earliest gods were described occasionally behaving mischievously towards each other, but were generally involved in co-operative creative ordering.

Lists of large numbers of Sumerian deities have been found. Their order of importance and the relationships between the deities has been examined during the study of cuneiform tablets.

The majority of Sumerian deities belonged to a classification called the Anunna (“[offspring] of An”), whereas seven deities, including Enlil and Inanna, belonged to a group of “underworld judges" known as the Anunnaki (“[offspring] of An” + Ki; alternatively, "those from heaven (An) who came to earth (Ki)"]). During the Third Dynasty of Ur, the Sumerian pantheon was said to include sixty times sixty (3600) deities.

The main Sumerian deities are:

The Sumerians had an ongoing linguistic and cultural exchange with the Semitic Akkadian peoples in northern Mesopotamia for generations prior to the usurpation of their territories by Sargon of Akkad in 2340 BCE. Sumerian mythology and religious practices were rapidly integrated into Arabian culture, presumably blending with the original Akkadian belief systems that have been mostly lost to history. Sumerian deities developed Akkadian counterparts. Some remained virtually the same until later Babylonian and Assyrian rule. The Sumerian god An, for example, developed the Akkadian counterpart Anu; the Sumerian god Enki became Ea; and the Sumerian gods Ninurta and Enlil remained very much the same in the Akkadian pantheon.

Some stories in Sumerian religion appear similar to stories in other Middle-Eastern religions. For example, in the Epic of Gilgamesh, the biblical account of Noah and the flood myth resembles some aspects of the Sumerian deluge myth. The Judaic underworld Sheol is very similar in description with the Sumerian and Babylonian Kigal, ruled by the goddess Ereshkigal and in the Babylonian religion, with their introduced consort, the death god Nergal. Sumerian scholar Samuel Noah Kramer noted similarities between many Sumerian and Akkadian "proverbs" and the later Hebrew proverbs, many of which are featured in the Book of Proverbs.

All content from Kiddle encyclopedia articles (including the article images and facts) can be freely used under Attribution-ShareAlike license, unless stated otherwise. Cite this article:
Sumerian religion Facts for Kids. Kiddle Encyclopedia.