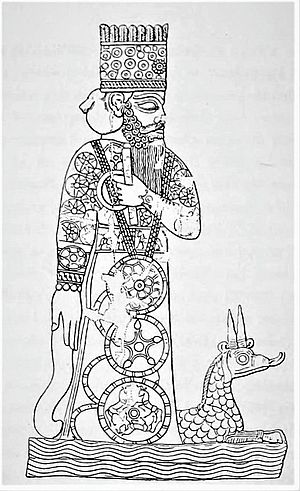 The god Marduk and his dragon Mušḫuššu, from a Babylonian cylinder seal.

Mesopotamian religion refers to the religious beliefs and practices followed by the various peoples living in Ancient Mesopotamia (around the area of modern Iraq). It dominated the region for a period of 3500 years until the 1st century BCE (about two thousand years ago).

Mesopotamian religion was polytheistic, worshipping over two thousand different gods, many of which were associated with a specific city-state within Mesopotamia such as Sumer, Akkad, Assur, Nineveh and Babylon. Some of the most significant of these gods were Anu, Ea, Enlil, Ishtar, Ashur, Shamash, Tammuz, Adad/Hadad, Sin, Dagan, Ninurta, Nisroch and Marduk.

Some historians claim that Mesopotamian religion is the worlds oldest faith, although there are several other claims to that title. What we know about Mesopotamian religion comes from archaeological evidence uncovered in the region, particularly literary sources, which are usually written in cuneiform on clay tablets and which describe both mythology and cultic practices. However, other artefacts can also be used as the Mesopotamians' "entire existence was infused by their religiosity, just about everything they have passed on to us can be used a source of knowledge about their religion." 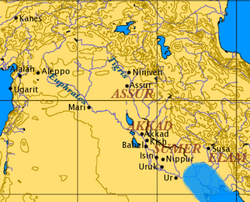 The peoples of Mesopotamia were not one united nationality, but members of various different city-states. In the fourth millennium BCE, when the first evidence for what is recognisably Mesopotamian religion can be seen, the Sumerians appeared in Mesopotamia, although it is not known if they migrated into the area or whether they were some of the original inhabitants. They settled in southern Mesopotamia, which became known as Sumer, and had a great influence over many of the Mesopotamian peoples and their culture. Meanwhile, in the north, in an area known as Akkad, a civilisation known as the Akkadians arose, who spoke a semitic language that was distinct from that of the Sumerians.

Gradually there was increasing blending between the Sumerian and Akkadian cultures and deities, with the Akkadians typically preferring to worship fewer deities, but elevating them to greater positions of power. In circa 2300 BCE the Akkadian king Sargon the Great conquered all of Mesopotamia, though this Akkadian empire collapsed after two centuries. Then, around 1800 BCE, the leader of the city-state of Babylon, King Hammurabi, conquered much of Mesopotamia, but this Babylonian empire collapsed a century later due to attacks from mountain-dwelling people known as the Kassites. Following this, Mesopotamia became divided largely between two powerful city-states; the Babylonians to the south and the Assyrians to the north, although eventually, in the 7th century BCE, Assyria fell to its enemy.

In the 6th century BCE, Mesopotamia was invaded by the Persian empire, then ruled by Cyrus the Great, but the Persians maintained and did not interfere in the native culture and religion, however under their control, the foreign aramaic language began to rise in predominance. Then, two centuries later, the Greek emperor Alexander the Great overthrew the Persians and took control of Mesopotamia itself, heralding the end of the era of ancient Mesopotamia.

There are no specific written records explaining Mesopotamian religious cosmology that survive to us today. Nonetheless, modern scholars have examined various accounts, and created what is believed to be an at least partially accurate depiction of Mesopotamian cosmology. In the Epic of Creation, dated to 1200 BCE, it explains that the god Marduk killed the mother goddess Tiamat and used half her body to create the earth, and the other half to create both the paradise of šamû and the netherworld of irṣitu. A document from a similar period stated that the universe was a spheroid, with three levels of šamû, where the gods dwelt, and where the stars existed, above the three levels of earth below it.

Mesopotamian religion was polytheistic, thereby accepting the existence of many different gods, both male and female, though it was also henotheistic, with certain gods being viewed as superior to others by their specific devotees. These devotees were often from a particular city or city-state that held that deity as its patron deity, for instance the god Enki was often associated with the city of Eridu, and the god Marduk was associated with Babylon. Whilst the full number of gods and goddesses found in Mesopotamia is not known, K. Tallqvist, in his Akkadische Götterepitheta (1938) counted around two thousand four hundred that we now know about, most of which had Sumerian names. In the Sumerian language, the gods were referred to as dingir, whilst in the Akkadian language they were known as ilu and it seems that there was syncreticism between the gods worshipped by the two groups, adopting one another's deities.

The Mesopotamian gods bore many similarities with humans, and were anthropomorphic, thereby having humanoid form. Similarly, they often acted like humans, requiring food and drink, as well as drinking alcohol and subsequently suffering the effects of drunkenness. In many cases, the various deities were family relations of one another, a trait found in many other polytheistic religions. The historian J. Bottéro was of the opinion that the gods were not viewed mystically, but were instead seen as high-up masters who had be obeyed and feared, as opposed to loved and adored. Nonetheless, many Mesopotamians, of all classes, had names that were devoted to a certain deity; this practice appeared to have begun in the third millennium BCE amongst the Sumerians, but also was later adopted by the Akkadians as well.

Initially, the pantheon of deities was not ordered, but later Mesopotamian theologians came up with the concept of ranking the deities in order of importance. A Sumerian list of around 560 gods that did this was uncovered at Fâra and Tell Abû Ṣalābīkh and dated to circa 2600 BCE, ranking five primary deities as being of particular importance. One of the most important of these early Mesopotamian deities was the god Enlil, who was originally a Sumerian divinity viewed as a king of the gods and a controller of the world, who was later adopted by the Akkadians. Another was the Sumerian god An, who served a similar role to Enlil and became known as Anu amongst the Akkadians. The Sumerian god Enki was later also adopted by the Akkadians, initially under his original name, and later as Éa. Similarly the Sumerian moon god Nanna became the Akkadian Sîn whilst the Sumerian sun god Utu became the Akkadian Šamaš. One of the most notable goddesses was the Sumerian love deity Inanna, who was later equated with the Akkadian Ištar. With the later rise to power of the Babylonians in the 18th century BCE, the king, Hammurabi, declared Marduk, a deity who before then had not been of significant importance, to a position of supremacy alongside Anu and Enlil.

Perhaps the most significant legend to survive from Mesopotamian religion is the Epic of Gilgamesh, which tells the story of the heroic king Gilgamesh and his wild friend Enkidu, and the former's search for immortality which is entwined with all the gods and their approval.

The ancient Mesopotamians believed in an afterlife that was a land below our world. It was this land, known alternately as Arallû, Ganzer or Irkallu, the latter of which meant "Great Below", that it was believed everyone went to after death, irrespective of social status or the actions performed during life.

"Enlil! his authority is far-reaching; his word is sublime and holy. His decisions are unalterable; he decides fate forever! His eyes scrutinize the entire world!"

A prayer to the god Enlil.

The pagan Mesopotamians venerated images of their gods, which it was believed actually held the essence or personality of the deity that they represented; this is evident from the poem How Erra Wrecked the World, in which Erra deceived the god Marduk into leaving his cult statue.

A number of written prayers have survived from ancient Mesopotamia, each of which typically praise the god that they are describing above all others. These poems often show that praising these gods was often based on fear rather than joyful celebration.

In parts of Mesopotamian religion, magic was believed in and actively practiced. At the city of Uruk, archaeologists have excavated houses dating from the 5th and 4th centuries BCE in which cuneiform clay tablets have been unearthed containing magical incantations.

All content from Kiddle encyclopedia articles (including the article images and facts) can be freely used under Attribution-ShareAlike license, unless stated otherwise. Cite this article:
Ancient Mesopotamian religion Facts for Kids. Kiddle Encyclopedia.