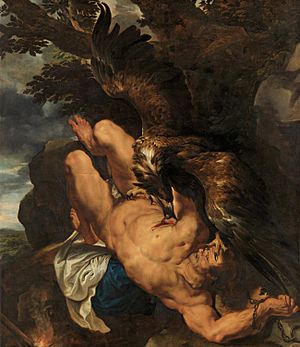 Prometheus was a Titan in Greek mythology. He is the son of Iapetus and Themis. He created humans. He also stole fire from Zeus and gave it to humans. As punishment, Zeus had Prometheus chained to a mountain. Every day an eagle would come and eat his liver. Prometheus is immortal, so he never died, and his liver grew back every night. But he still felt great pain.

After a long time, Zeus sent his son Heracles to free Prometheus by breaking the chains which held him.

Aeschylus wrote a play about Prometheus.

All content from Kiddle encyclopedia articles (including the article images and facts) can be freely used under Attribution-ShareAlike license, unless stated otherwise. Cite this article:
Prometheus Facts for Kids. Kiddle Encyclopedia.