The 40th parallel north is a circle of latitude that is 40 degrees north of the Earth's equatorial plane. It crosses Europe, the Mediterranean Sea, Asia, the Pacific Ocean, North America, and the Atlantic Ocean.

At this latitude, the sun can be seen for 15 hours, 1 minute during the summer solstice and 9 hours, 20 minutes during the winter solstice.

Starting in Spain at the Prime Meridian and heading eastwards, the parallel 40° north passes through: 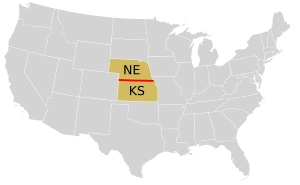 The 40th parallel defines the border between Nebraska and Kansas 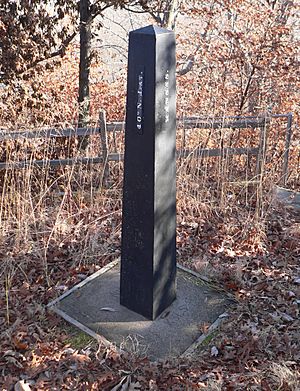 All content from Kiddle encyclopedia articles (including the article images and facts) can be freely used under Attribution-ShareAlike license, unless stated otherwise. Cite this article:
40th parallel north Facts for Kids. Kiddle Encyclopedia.