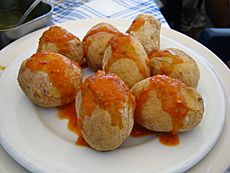 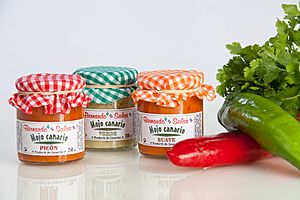 Mojo ( from Portuguese molho meaning "sauce") is the name, or abbreviated name, of several types of sauces, varying in spiciness, consisting primarily of olive oil, local pepper varieties (called pimienta in the Canary Islands), garlic, paprika (called pimentón in Spain), cumin or coriander, and other spices. Mojo originated in the Canary Islands, where the main varieties are red mojo (mojo rojo) and green mojo (mojo verde). Other countries have recipes similar to mojo, where acidic ingredients such as vinegar, lemon, orange, or lime juice may be used.

Red mojo, made of small red peppers from La Palma (called pimienta picona) and paprika, is usually eaten with meat. Red and green mojo can be used interchangeably to season some dishes, prominently papas arrugadas con salsa mojo, or potatoes with mojo. Mojo is also commonly served with fresh bread rolls at the beginning of a meal.

To prepare red mojo it is necessary to dry the peppers. Once dry, peppers can be kept for a long time before preparation. Before making mojo, peppers are soaked in water so they lose their spiciness. Then, grains and fibers are removed but for a few that will make the mojo spicy. In the case of green mojo, spiciness will be regulated by the amount of garlic, and can be also intensified by adding ground coriander seeds.

Local variations of mojo include recipes with cheese such as mojo con queso (mojo with cheese) from La Palma and El Hierro, as well as almogrote from La Gomera, where it is turned it into a paste that can be spread over bread. Every Canarian family has its own recipe for mojo, so it can vary greatly in flavour, spiciness and texture. There is also almond mojo which is an ideal accompaniment to various roasted dishes. Saffron mojo, whose main ingredient is Canarian saffron, tastes excellent with any kind of fried cheese. Garlic mojo is ideal on pizza. Herb mojo is made of mixed spices and is ideal for any kind of salad.

Similar sauces, also known as mojo, are also popular in Cuba and throughout the islands of the Caribbean, Hispanic or non-Hispanic, due to heavy Canarian emigration to the Caribbean, and have even influenced some barbecue sauces in the Deep South region of the United States, particularly the states of Florida, Texas, and Louisiana. The flavor can be made of almost everything, from tomato or pepper to avocado.

In Cuban cooking, mojo applies to any sauce that is made with garlic, olive oil or pork lard, and a citrus juice, traditionally bitter orange juice. It is commonly used to flavor the cassava tuber and is also used to marinate roast pork. Without oregano, the sauce is typically called 'mojito' and used for dipping plantain chips and fried cassava (yuca). To create the marinade for pork, the ingredients are bitter orange juice, garlic, oregano, cumin, and salt.

In Puerto Rico, mojo is a herb sauce of finely chopped cilantro or parsley with salt, plenty of crushed garlic and olive oil. Black pepper, butter, grated onion, vinegar and any citrus fruit can also be added. It is commonly used on the island as a marinade for chicken roast and a dip for tostones, fried cassava, and sometimes mashed with mofongo. Puerto Rican Chef Jose Enrique mojo mixed with papaya and avocado topped on fish has become a part of Puerto Rican gastronomy.

In the Dominican Republic, it is called wasakaka and is used as a sauce for roasted chicken and boiled cassava. Wasakaka is a mix of garlic, olive oil, and sour orange or lemon juice.

All content from Kiddle encyclopedia articles (including the article images and facts) can be freely used under Attribution-ShareAlike license, unless stated otherwise. Cite this article:
Mojo (sauce) Facts for Kids. Kiddle Encyclopedia.