Mofongo is a Puerto Rican dish with fried plantains as its main ingredient. Plantains are picked green and fried, then mashed with salt, garlic, broth, and olive oil in a wooden pilón (mortar and pestle). The goal is to produce a tight ball of mashed plantains that will absorb the attending condiments and have either pork cracklings (chicharrón) or bits of bacon inside. It is traditionally served with fried meat and chicken broth soup. Particular flavors result from variations that include vegetables, chicken, shrimp, beef, or octopus packed inside or around the plantain orb.

Mofongo's roots lead to the African fufu, mixed with some Spanish and Taíno influences. Fufu is made from various starchy vegetables and was introduced to the Caribbean by Africans in the Spanish New World colonies such as Cuba (fufu de plátano), Dominican Republic (mangú), and Puerto Rico (mofongo) this also most likely includes Colombia (cayeye), Amazon region and Peru (tacacho).

These ethnic groups that populated Puerto Rico used the technique of a mallet to mash large amounts of starchy foods. The mash was then softened with liquids and fats. The word “mofongo” stems from the Angolan Kikongo term mfwenge-mfwenge, which means “a great amount of nothing at all.”

Mofongo evolved from fufu using the African method with vegetation available in the Caribbean. Plantains are most often used, but other starchy roots native to the island used by Taínos can also be used. Puerto Ricans have an obsession with fried food known collectively as cuchifrito in New York City and Kiosks in Puerto Rico. Spanish ingredients such as pork, garlic, broth, and olive oil are commonly used together in Puerto Rican cuisine and are found in staple dishes such as arroz con gandules, alcapurria, pasteles, habichuelas, recaíto, arroz junto, among others. The method of frying comes from the African side and is heavily used more than anyplace in the Caribbean. Broth is often made with chicken and sofrito. Sofrito is made with Spanish and Taíno fruits, vegetables, and herbs. 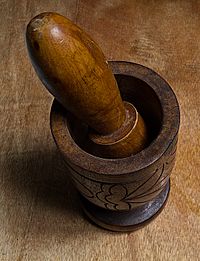 A pilón to make mofongo

Plantains and/or starchy roots are cut about half an inch thick and deep-fried. When done, the plantains/roots are crisp outside, but dense inside. The plantains/roots are then mashed in a wooden mortar and pestle called a pilón made with mahogany or guaiacum, both native hardwoods. Broth, olive oil, garlic, and pork cracklings are added and mashed as well. The consistency of mofongo is much more stiff than fufu. In Africa, fufu is accompanied by a bowl of soup. In Puerto Rico, traditionally mofongo is accompanied by chicken broth soup, but braised meat has become more popular. 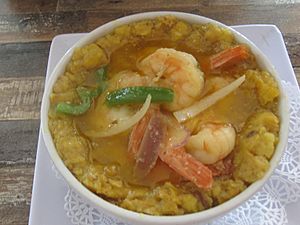 Mofongo stuffed with shrimp (camarón in Spanish) is called camarofongo.

Thanksgiving is an American holiday that has been adopted by Puerto Rico and Puerto Ricans' outside the commonwealth. Turkey is the main focus on every Thanksgiving table and is traditionally stuffed with bread. The bread stuffing can be mixed with mofongo or replaced with mofongo. The dish is called pavochon. 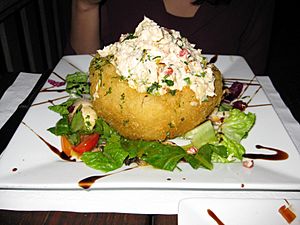 Mofongo relleno is a stuffed variation of mofongo, which, according to Yvonne Ortiz, was first made in "Tino's Restaurant on the west coast of Puerto Rico" when seafood, abundant in the region, was placed inside the plantain ball with braised meat or more seafood poured over it. Nowadays, mofongo relleno is commonly stuffed with either seafood, poultry, or another meat.

Mofongo outside of Puerto Rico 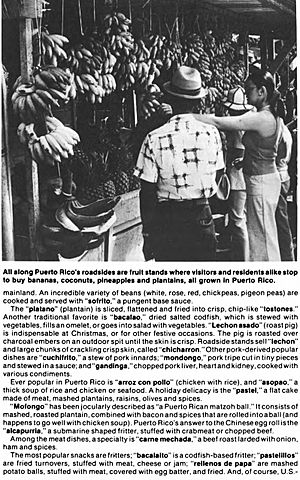 Bolón de verde is a similar dish in Ecuador. The dish appears much later in Ecuadorian cuisine. Plantains are boiled or roasted, mashed with chicarrón and cheese (queso blanco) formed into balls and fried.

Mofongo has become popular among Colombians, Cubans and Dominicans living in the United States and anywhere large numbers of Puerto Ricans or Dominicans reside.

All content from Kiddle encyclopedia articles (including the article images and facts) can be freely used under Attribution-ShareAlike license, unless stated otherwise. Cite this article:
Mofongo Facts for Kids. Kiddle Encyclopedia.