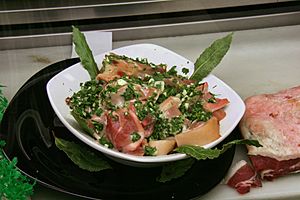 Raw cuchifritos before being cooked, with all of the ingredients 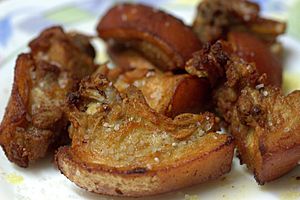 Fried cochifritos made of cochinillo (suckling pig) ready for consumption

Cuchifritos or cochifritos refers to various fried foods prepared principally of pork in Spanish and Puerto Rican cuisine. In Spain, cuchifritos are a typical dish from Segovia in Castile. The dish consists of pork meat fried in olive oil and garlic and served hot. In Puerto Rico they include a variety of dishes including morcilla (blood sausage), papas rellenas (fried potato balls stuffed with meat), and chicharron (fried pork skin), and other parts of the pig prepared in different ways. Some cuchifritos dishes are prepared using plantain as a primary ingredient. Cuchifritos vendors also typically serve juices and drinks such as passionfruit, pineapple, and coconut juice, as well as ajonjolí, a drink made from sesame seeds.

The term used to refer to small, fried parts of a pig.

It is incorrectly thought that it derives its name from the word cuchí, short for cochino or pig and frito, which describes something that is fried.

The etymology of the word comes from the participle of verbs cocer -to cook or boil- (latín coctum > cocho, from which derives the element cochi-) y freír -to fry-(-frito).

Cuchifritos may also refer to restaurants that serve this type of food.

Fried dishes served in a cuchifrito:

New World cuchifritos and cuchifrito establishments have appeared regularly in the Bronx Flavor television series hosted by Baron Ambrosia. Episodes such as "Cuchifritos of Love" document the history of the food and its distinct role in Nuyorican cuisine and identity.

All content from Kiddle encyclopedia articles (including the article images and facts) can be freely used under Attribution-ShareAlike license, unless stated otherwise. Cite this article:
Cuchifritos Facts for Kids. Kiddle Encyclopedia.