Kids Encyclopedia Facts
This page is about the savoury maize dumpling. For pastries, pies, and cakes, see pastel (food).

Pasteles ( singular pastel), also known as pastelles (singular pastelle) in the English-speaking Caribbean, are a traditional dish in several Latin American and Caribbean countries. In Puerto Rico, the Dominican Republic, Trinidad and Tobago, the Caribbean coast of Colombia, and Panama, it looks like a tamale. In Hawaii, they are called pateles in a phonetic rendering of the Puerto Rican pronunciation of pasteles, as discussed below.

Colombian pasteles are called pastel de arroz (rice pasteles) and are more of a tamale than a typical pastel. Is made up of rice that is seasoned and left out in the sun; a process referred to as orear (to air). The rice is then mixed with many ingredients. Pickled vegetables, chorizo, pork, chickpeas, olives, and potatoes are the most common. Chicken and beef are also used. Colombian pasteles are wrapped twice, once with a cabbage leaf, and again with a banana leaf. This is the typical meal of the Nochebuena Dinner (Christmas Eve), in the Caribbean Coast Region of Colombia since their humble beginnings. It is often confused with the tamal from the Andean region, which is made up with corn.

In Dominican Republic pasteles are a Christmas tradition adopted from Puerto Rico. Dominican version are filled with ground beef and known as "pasteles de hojas".

"Bollo de Guayiga" is made of a tuber called Guayiga and is available in southern beaches as a snack, but to the region of San Cristobal and Najayo Beach.

The common name for this food in Hawaii, pateles, is most likely borrowed from Caribbean Spanish, which features weakening or loss of /s/ at the end of syllables: the pronunciation of pasteles as "pateles" occurs in Puerto Rican dialects, for instance. Over 5000 Puerto Ricans migrated to Hawaii at the dawn of the 20th century to work in sugar plantations. The singular of pasteles, pastel (often pronounced patel), has been constructed through back-formation. The usage of the singular can be seen in phrases such as pastele stew, "pot pastele", and "baked pastele".

In Puerto Rico, pasteles are a cherished culinary recipe, especially around Christmas-time. The masa consists of typically grated green banana, green plantain, white yautía, potato, and tropical pumpkins known as calabazas. It is seasoned with liquid from the meat mixture, milk, and annatto oil. The meat is prepared as a stew and usually contains any combination of boston butt, ham, bacon, raisins, chickpeas, sliced pickled pimiento peppers, olives and capers, and is commonly seasoned with bay leaves, recaito, tomato sauce, adobo seco, and annatto oil, but the seasoning is not limited to these. Filling can range from vegetables, poultry, fish, pork and game. In some more modern recipes the pork is roasted and the bone is removed to make the broth.

Traditionally masa was flavored breadcrumbs and butter, almonds where added to filling and a chili would be tucked on one end of every pastele. Chili is said to be a Taino tradition. 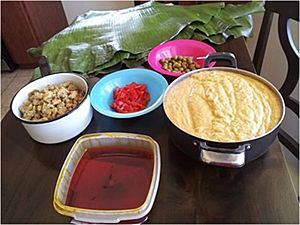 A typical set of ingredients used to make pasteles

Assembling a typical pastel involves a large sheet of parchment paper, a strip of banana leaf that has been heated over an open flame to make it supple, and a little annatto oil on the leaf. The masa is then placed on banana leaf and stuffed with the meat mixture. The paper is then folded and tied with kitchen string to form packets. Some people use aluminum foil instead of parchment and string. Parchment paper is only applied if the pastele is boiled or steamed. Once made, pasteles can either be cooked in boiling water, steamed, barbecue (smoked or slow grilling), or frozen for later use. Because they are so labor-intensive, large Puerto Rican families often make anywhere from 50 to 200 or more at a time, especially around the holiday season. Pasteles are accompanied with rice and pigeon peas (arroz con gandules), escabeche, roasted pork, and other holiday foods.

Pasteles de yuca is one of many recipes in Puerto Rico that are popular around the island and in Latin America. The masa is made with cassava, yautía, sweet-ripe plantains, and squash. The cassava is grated and squeezed through a cheesecloth removing most of its liquid. Broth, milk, butter, annatto oil is added to the masa. They are filled with currants, chickpeas, olives, capers, seafood, meat or poultry.

Pasteles de yuca, hayaca de yuca, empanadilla/empanada de yuca and rusiao de yuca are often mistaken as the same, because they are all cassava based wrapped in banana leaf. While the pastele de yuca is mixed with other tubers the hayaca is not. Cassava is grated and squeezed threw a cheese cloth as well and seasoned with milk, lard, and broth. The hayaca is usually filled with chicken, nuts, beans, raisins and other ingredients. These are always cooked slowly on a grill, covered using the hot smoke to cook the hallaca rather than direct flame. Because of the long and elaborate process and skills that takes to prepare, the hayaca is now rarely available but is still found, mostly in coastal, family-owned restaurants and other small establishments known as "kioscos" where there are still strong ties to native heritage and classic slow cooking skills. This slow cooking process is also used to make rusiao de yuca, a close relative of hayaca made in Loíza, Puerto Rico. Rusiao de yuca masa is mixed with eggs, coconut milk, butter, anise, sugar, and are meat less with sometimes being filled with cheese. Empanadilla de yuca also uses grated cassava that has been toasted with cumin and oregano. The toasted cassava is then mixed with lard and fried pork skin before tied in to a banana leaf and slowly cooked on a grill.

Another variety is pasteles de arroz where the "masa" is actually composed of partly cooked seasoned rice which is fully cooked as the pastel boils. Fillings are traditional, pork butt, chicken and crabmeat are the most common.

Related to alcapurria, tamale, hallacas, and guanimes, pasteles are believed to have been made by natives of Boriquen (Puerto Rico). Tainos made masa from cassava, yautía and squash. The masa was then filled with beans, chilies, corn, nuts, meat (lizards, frogs or birds), fish and wrapped in corn husk.

The origins of pasteles, however, can be traced back several centuries to Spanish colonial times, before they became an essential Puerto Rican Christmas dish. In Eating Puerto Rico: A History of Food, Culture, and Identity, Ortíz Cuadra explains that the technique of wrapping the pastel in banana leaves is owed largely to Puerto Ricans’ African ancestors who were enslaved by the Spanish and forced to work the sugar plantations. In the early 19th century, Spanish colonizers provided enslaved African workers a limited diet of viandas, which largely included plantains, a fruit that colonizers and white Puerto Rican elites alike looked down on as “rural y bárbaro.”

Puerto Rico has turned pasteles making into an art having hundreds of recipes and an annual pastel festival (Festival Nacional del Pastel Puertorriqueño) on the island. 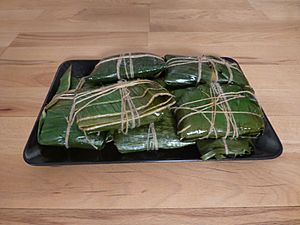 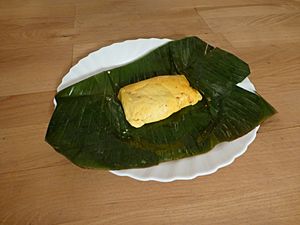 Trinidadian pastelles are small meat-filled cornmeal pies stuffed with meat, fish or vegetables seasoned with fresh herbs and flavoured with raisins, olives and capers wrapped and steamed in a banana leaf. They are traditionally prepared and eaten during the Christmas season. It is believed that they were introduced by Spanish colonizers who ruled between the late 15th and early 18th centuries.

They exist in some form or another throughout Latin America and are more commonly known in Venezuela as hallacas (pronounced hayacas). The origins of pastelles are unclear. One view is that Spanish colonists who settled in the region made them as a substitute for one of their favourite delicacies – empanada gallega. Empanada gallega and pasteles both have heavily spiced meaty fillings but pastelles are made with cornmeal while the empanada is more like a typical pastry as it is made with white flour. Another view is that the dish, because it uses corn and is wrapped in banana leaves, is a derivative of the mesoamerican tamale.

A sweet version is called paime and is also a Christmas dish. It contains no filling, but the dough itself contains ground coconut and raisins.

All content from Kiddle encyclopedia articles (including the article images and facts) can be freely used under Attribution-ShareAlike license, unless stated otherwise. Cite this article:
Pasteles Facts for Kids. Kiddle Encyclopedia.