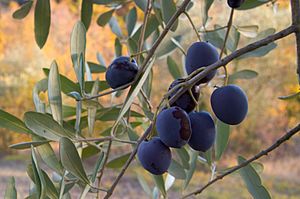 Olives on a tree

The olive (Olea europaea) is the fruit of the olive tree. It is an important food crop in Italy, Spain and other countries around the Mediterranean, especially Greece.

It is a healthy food but rather fatty. It has olive oil, one of the fatiest cooking oils in use, even more than palm, canola and other vegetable oils). Olive oil is the juice made by crushing olives. It is considered to be healthier alternative to sunflower oil.

The raw olives are very bitter. They are "cured" mostly by bacterial fermentation. Later they may be alternately washed with water and packed with salt. The procedures vary a lot, and different varieties of olives get different treatment. The bitter chemical oleuropein, a phenol compound, has to be broken down or removed. This is what the curing process does. Even so, olives still often do have a rather bitter taste. 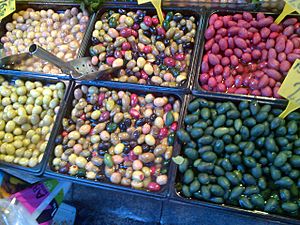 Coloured olives at a traditional market in Kadıköy, Istanbul

The olive tree, Olea europaea, has been cultivated for olive oil, fine wood, olive leaf, and the olive fruit. About 90% of all harvested olives are turned into oil, while about 10% are used as table olives. The olive is one of the "trinity" or "triad" of basic ingredients in Mediterranean cuisine, the other two being wheat for bread, pasta, and couscous, and the grape for wine. 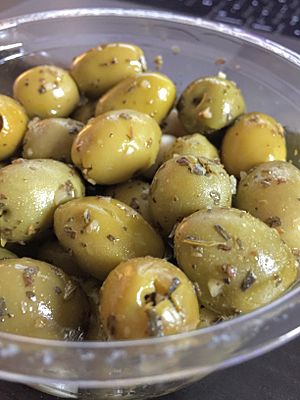 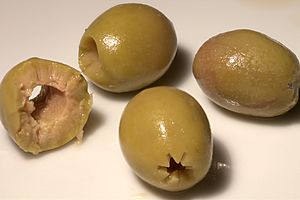 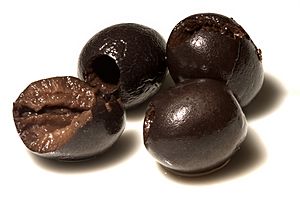 Table olives are classified by the IOC into three groups according to the degree of ripeness achieved before harvesting: 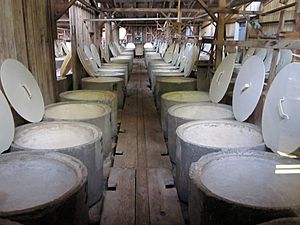 Raw or fresh olives are naturally very bitter; to make them palatable, olives must be cured and fermented, thereby removing oleuropein, a bitter phenolic compound that can reach levels of 14% of dry matter in young olives. In addition to oleuropein, other phenolic compounds render freshly picked olives unpalatable and must also be removed or lowered in quantity through curing and fermentation. Generally speaking, phenolics reach their peak in young fruit and are converted as the fruit matures. Once ripening occurs, the levels of phenolics sharply decline through their conversion to other organic products which render some cultivars edible immediately. One example of an edible olive native to the island of Thasos is the throubes black olive, which when allowed to ripen in the sun, shrivel, and fall from the tree, is edible.

The curing process may take from a few days, with lye, to a few months with brine or salt packing. With the exception of California style and salt-cured olives, all methods of curing involve a major fermentation involving bacteria and yeast that is of equal importance to the final table olive product. Traditional cures, using the natural microflora on the fruit to induce fermentation, lead to two important outcomes: the leaching out and breakdown of oleuropein and other unpalatable phenolic compounds, and the generation of favourable metabolites from bacteria and yeast, such as organic acids, probiotics, glycerol, and esters, which affect the sensory properties of the final table olives. Mixed bacterial/yeast olive fermentations may have probiotic qualities. Lactic acid is the most important metabolite, as it lowers the pH, acting as a natural preservative against the growth of unwanted pathogenic species. The result is table olives which can be stored without refrigeration. Fermentations dominated by lactic acid bacteria are, therefore, the most suitable method of curing olives. Yeast-dominated fermentations produce a different suite of metabolites which provide poorer preservation, so they are corrected with an acid such as citric acid in the final processing stage to provide microbial stability.

The many types of preparations for table olives depend on local tastes and traditions. The most important commercial examples are:

Spanish or Sevillian type (olives with fermentation): Most commonly applied to green olive preparation, around 60% of all the world's table olives are produced with this method. Olives are soaked in lye (dilute NaOH, 2–4%) for 8–10 hours to hydrolyse the oleuropein. They are usually considered "treated" when the lye has penetrated two-thirds of the way into the fruit. They are then washed once or several times in water to remove the caustic solution and transferred to fermenting vessels full of brine at typical concentrations of 8–12% NaCl. The brine is changed on a regular basis to help remove the phenolic compounds. Fermentation is carried out by the natural microbiota present on the olives that survive the lye treatment process. Many organisms are involved, usually reflecting the local conditions or "Terroir" of the olives. During a typical fermentation gram-negative enterobacteria flourish in small numbers at first, but are rapidly outgrown by lactic acid bacteria species such as Leuconostoc mesenteroides, Lactobacillus plantarum, Lactobacillus brevis and Pediococcus damnosus. These bacteria produce lactic acid to help lower the pH of the brine and therefore stabilize the product against unwanted pathogenic species. A diversity of yeasts then accumulate in sufficient numbers to help complete the fermentation alongside the lactic acid bacteria. Yeasts commonly mentioned include the teleomorphs Pichia anomala, Pichia membranifaciens, Debaryomyces hansenii and Kluyveromyces marxianus. Once fermented, the olives are placed in fresh brine and acid corrected, to be ready for market.

Sicilian or Greek type (olives with fermentation): Applied to green, semiripe and ripe olives, they are almost identical to the Spanish type fermentation process, but the lye treatment process is skipped and the olives are placed directly in fermentation vessels full of brine (8–12% NaCl). The brine is changed on a regular basis to help remove the phenolic compounds. As the caustic treatment is avoided, lactic acid bacteria are only present in similar numbers to yeast and appear to be outcompeted by the abundant yeasts found on untreated olives. As very little acid is produced by the yeast fermentation, lactic, acetic, or citric acid is often added to the fermentation stage to stabilize the process.

Picholine or directly-brined type (olives with fermentation): Applied to green, semiripe, or ripe olives, they are soaked in lye typically for longer periods than Spanish style (e.g. 10–72 hours) until the solution has penetrated three-quarters of the way into the fruit. They are then washed and immediately brined and acid corrected with citric acid to achieve microbial stability. Fermentation still occurs carried out by acidogenic yeast and bacteria, but is more subdued than other methods. The brine is changed on a regular basis to help remove the phenolic compounds and a series of progressively stronger concentrations of salt are added until the product is fully stabilized and ready to be eaten.

Water-cured type (olives with fermentation): Applied to green, semiripe, or ripe olives, these are soaked in water or weak brine and this solution is changed on a daily basis for 10–14 days. The oleuropein is naturally dissolved and leached into the water and removed during a continual soak-wash cycle. Fermentation takes place during the water treatment stage and involves a mixed yeast/bacteria ecosystem. Sometimes, the olives are lightly cracked with a hammer or a stone to trigger fermentation and speed up the fermentation process. Once debittered, the olives are brined to concentrations of 8–12% NaCl and acid corrected, and are then ready to eat.

Salt-cured type (olives with minor fermentation): Applied only to ripe olives, they are usually produced in Morocco, Turkey, and other eastern Mediterranean countries. Once picked, the olives are vigorously washed and packed in alternating layers with salt. The high concentrations of salt draw the moisture out of olives, dehydrating and shriveling them until they look somewhat analogous to a raisin. Once packed in salt, fermentation is minimal and only initiated by the most halophilic yeast species such as Debaryomyces hansenii. Once cured, they are sold in their natural state without any additives. So-called Oil-cured olives are cured in salt, and then soaked in oil.

California or "artificial ripening" type (olives without fermentation): Applied to green and semiripe olives, they are placed in lye and soaked. Upon their removal, they are washed in water injected with compressed air. This process is repeated several times until both oxygen and lye have soaked through to the pit. The repeated, saturated exposure to air oxidises the skin and flesh of the fruit, turning it black in an artificial process that mimics natural ripening. Once fully oxidised or "blackened", they are brined and acid corrected and are then ready for eating.

Olive wood is very hard and is prized for its durability, colour, high combustion temperature, and interesting grain patterns. Because of the commercial importance of the fruit, and the slow growth and relatively small size of the tree, olive wood and its products are relatively expensive. Common uses of the wood include: kitchen utensils, carved wooden bowls, cutting boards, fine furniture, and decorative items.

The yellow or light greenish-brown wood is often finely veined with a darker tint; being very hard and close-grained, it is valued by woodworkers. 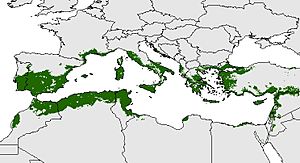 Distribution of olive trees over the Mediterranean Basin.

The earliest evidence for the domestication of olives comes from the Chalcolithic period archaeological site of Teleilat el Ghassul in what is today modern Jordan. Farmers in ancient times believed that olive trees would not grow well if planted more than a certain distance from the sea; Theophrastus gives 300 stadia (55.6 km or 34.5 mi) as the limit. Modern experience does not always confirm this, and, though showing a preference for the coast, they have long been grown further inland in some areas with suitable climates, particularly in the southwestern Mediterranean (Iberia, northwest Africa) where winters are mild. 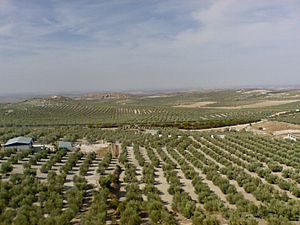 Olives are now cultivated in many regions of the world with Mediterranean climates, such as South Africa, Chile, Peru, Australia, and California and in areas with temperate climates such as New Zealand, under irrigation in the Cuyo region in Argentina which has a desert climate. They are also grown in the Córdoba Province, Argentina, which has a temperate climate with rainy summers and dry winters (Cwa). The climate in Argentina changes the external characteristics of the plant but the fruit keeps its original features. The northernmost olive grove is placed in Anglesey, an island off the north west coast of Wales, in the United Kingdom: but it is too early to say if the growing will be successful, having been planted in 2006. 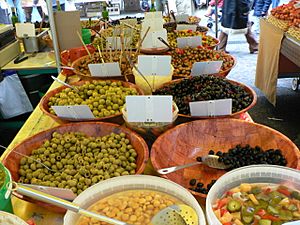 Olives at a market in Toulon, France

All content from Kiddle encyclopedia articles (including the article images and facts) can be freely used under Attribution-ShareAlike license, unless stated otherwise. Cite this article:
Olive (fruit) Facts for Kids. Kiddle Encyclopedia.