Jasmine (Jasminum) is a genus of shrubs and vines in the Family Oleaceae, with about 200 species, native to tropical and warm temperate regions. The majority of species grow as climbers on other plants or on structures. The leaves can be either evergreen or deciduous.

Jasmine flowers are white in most species, but with some species being yellow flowered. They are often strongly and sweetly scented. Flowering is in spring or summer in most species, but in a few species in winters. The common name 'jasmine' is often given to unrelated plants with pale, sweetly-scented flowers and dark green leaves. 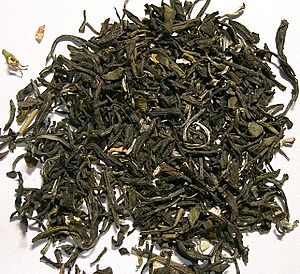 Jasmines are widely cultivated for their flowers, to be enjoyed in the garden, as house plants, and for cut flowers. The flowers are worn by women in their hair in southern and southeast Asia.

Jasmine flowers are also used to make tea, which typically has a green tea base. Many types yield an essential oil, which is used in the production of perfumes and incense.

It is an invasive species in Hawaii, where it is sometimes known by the inaccurate name "Brazilian Jasmine", and is also invasive in Florida.

All content from Kiddle encyclopedia articles (including the article images and facts) can be freely used under Attribution-ShareAlike license, unless stated otherwise. Cite this article:
Jasmine Facts for Kids. Kiddle Encyclopedia.