Kids Encyclopedia Facts
This page is about a type of marinade. For a method of food preparation indigenous to the Philippines with the same name, see Philippine adobo. 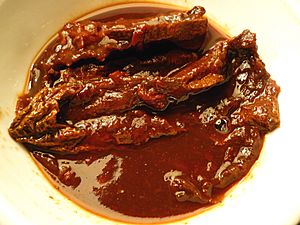 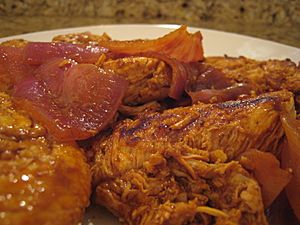 Adobo or adobar (Spanish: marinade, sauce, or seasoning) is the immersion of raw food in a stock (or sauce) composed variously of paprika, oregano, salt, garlic, and vinegar to preserve and enhance its flavor. The Portuguese variant is known as Carne de vinha d'alhos. The practice, native to Iberia (Spanish cuisine and Portuguese cuisine), was widely adopted in Latin America, as well as Spanish and Portuguese colonies in Africa and Asia.

In the Philippines, the name adobo was given by colonial-era Spaniards on the islands to a different indigenous cooking method that also uses vinegar. Although superficially similar, this developed independently of Spanish influence.

In the years following arrival of Europeans to the Americas, meat and fish started to be preserved by new methods. A low temperature facilitated the preservation of food, but the weather often did not provide temperatures low enough for preservation, so it was necessary to apply other techniques, such as adobo. Animals were usually slaughtered in the coldest months of winter, but surplus meat had to be preserved in the warmer months. This was facilitated through the use of adobos (marinades) along with paprika (a substance with antibacterial properties). Paprika gives a reddish color to adobos and at the same time the capsaicins in paprika permit fats to dissolve to the point of allowing tissue penetration, going deeper than the surface.

Adobo was employed initially as a method of food preservation, but in time—with the advent of refrigeration methods—it came to be used primarily as a method of flavoring foods before cooking. Traditional preparations were created with the intent of flavoring, such as cazón en adobo (dogfish in adobo, made from school shark and originating from Cadiz, a city in the Cádiz province of Spain); berenjenas de Almagro (Almagro aubergine, a pickled aubergine characteristic of "Manchega" cuisine from the Castile-La Mancha region of Spain, specifically from Almagro, a city in the Ciudad Real province of Spain); and lomo en adobo (tenderloin of beef or pork in adobo).

The noun form of adobo describes a marinade or seasoning mix. Recipes vary widely by region: Puerto Rican adobo, a rub used principally on meats, differs greatly from the Mexican variety. Meat marinated or seasoned with an adobo is referred to as adobado or adobada.

In Mexico adobo refers to a condiment or cooking sauce with a base containing chillies, particularly Chipotle and Ancho peppers. An Ancho pepper is a Poblano chili that is dried after it turns red. These sauces are used as a marinade and to add a smoky, spicy flavor.

Adobo relates to marinated dishes such as chipotles en adobo in which chipotles (smoked ripe jalapeño peppers) are stewed in a sauce with tomatoes, garlic, vinegar, salt, and spices. The spices vary, but generally include several types of peppers (in addition to the chipotle and most likely those on hand), ground cumin and dried oregano. Some recipes include orange juice and lemon or lime juices. They often include a pinch of brown sugar just to offset any bitter taste.

Puerto Rican-style adobo is a seasoned salt that is generously sprinkled or rubbed on meats and seafood prior to grilling, sautéing, or frying. Supermarkets sell prepared blends. There are two types of adobo on the island. The wet rub, adobo mojado, consists of crushed garlic, olive oil, salt, black pepper, dry or fresh orégano brujo, citrus juice or vinegar or a mix of both citrus and vinegar. More widely used on the island is a dry mix, adobo seco. It is easier to prepare and has a long shelf life. Adobo seco consists of garlic powder, onion powder, salt, black pepper, dry orégano brujo, and sometimes dried citrus zest.

Adobo is a typical dish of Peruvian cuisine, specifically in the area of Arequipa. This is a dish of pork marinated in spices and vegetables, which are cooked in a clay pot until it becomes tender. Bread is served alongside for dipping in the sauce. 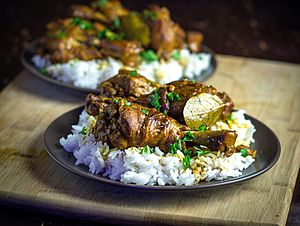 Unlike the Spanish and Latin American adobo, the main ingredients of Philippine adobo are ingredients native to Southeast Asia, namely vinegar, soy sauce or patis (fish sauce) , black peppercorns, and bay leaves. It does not traditionally use chilis, paprika, oregano, or tomatoes. There are other noted versions of Philippine adobo, namely Adobong Puti (White Adobo, prepared with salt instead of soy sauce) and Adobong Tuyo (Dry Adobo).

The dish is normally cooked with pork or chicken and sometimes with only vegetables like kangkong (water spinach) or sitaw (green beans).

Its only similarity to Spanish and Latin American adobo is the primary use of vinegar and garlic. Philippine adobo has a characteristically salty and sour (and often sweet) taste, in contrast to Spanish and Mexican adobos which are spicier or infused with oregano.

In Uruguay, adobo is a spice mix of the same spices of the Spanish marinade, also adobar is the act of using this mix as a condiment. A sauce made of adobo, salt and water is called mojo.

One of the earliest references to adobo is found in the Manual del Cocinero, Repostero, Pastelero, Confitero Y Bottilera by Mariano de Rementeria y Fica in 1850.

All content from Kiddle encyclopedia articles (including the article images and facts) can be freely used under Attribution-ShareAlike license, unless stated otherwise. Cite this article:
Adobo Facts for Kids. Kiddle Encyclopedia.