The jalapeño is a type of Mexican pepper. It is related to the family of the Chili pepper. It is pronounced hala-PEE-nyo. It is a small to medium-sized chile pepper that is prized for the hot, burning sensation that it produces in the mouth when eaten. It is a member of the capsicum species. Commonly picked and consumed while still green, it is occasionally allowed to fully ripen and turn red, orange, or yellow. 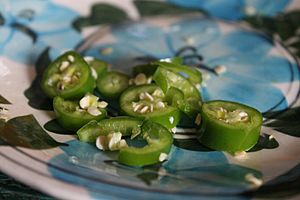 It is named after the city of Xalapa, Veracruz where it was traditionally produced. Jalapeños were in use by the Aztecs prior to the Spanish conquest. Aztec markets sold chipotles (smoked jalapeños), mole made from chipotles, besides the sale of fresh chilies.

The use of peppers in the Americas dates back thousands of years, including the practice of smoking some varieties of peppers in order to preserve them. In 1999, roughly 107,000 acres in Mexico were dedicated towards growing jalapeños, primarily in the Paloapán river basin in the north of the state of Veracruz and in the Delicias, Chihuahua area. 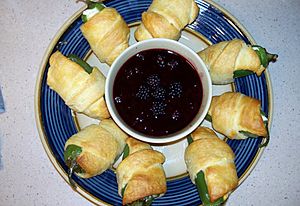 In comparison with other chile peppers, it has a heat level that varies from mild to hot depending on how it was grown and how it was prepared. Most sources agree that the heat, due to capsaicin and related compounds, is concentrated in the seeds and the veins—deseeding and deveining can reduce the heat imparted to a recipe that includes jalapeños.

Sweet hybridized varieties have been created with no "heat" although they retain the look and flavor of a jalapeño. These varieties can be used for making mild salsas and dishes served to anyone who doesn't tolerate spicy food.

They have a distinct acidic taste. The jalapeño rates between 2,500 and 8,000 Scoville units in heat. Handling fresh jalapeños may cause skin burns - wear latex or vinyl gloves while cutting, skinning, or seeding jalapeños, and never touch your eyes after handling hot peppers. 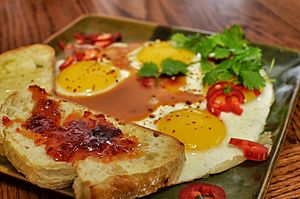 The jalapeño is the state pepper of Texas adopted in 1995.

Jalapeños were the very first peppers in space in 1982 on the Space Shuttle Columbia. Jalapeños are a great food to have in space as they have a longer “space” life and do not omit a strong odor.

The Guinness World Records for most jalapeños eaten in a minute is 16 by Alfredo Hernandes on 17 September 2006 at La Costeña Feel the Heat Challenge in Chicago, IL, USA.

All content from Kiddle encyclopedia articles (including the article images and facts) can be freely used under Attribution-ShareAlike license, unless stated otherwise. Cite this article:
Jalapeño Facts for Kids. Kiddle Encyclopedia.