Annatto is an orange-red condiment and food coloring derived from the seeds of the achiote tree (Bixa orellana), native to tropical regions from Mexico to Brazil. It is often used to impart a yellow or orange color to foods, but sometimes also for its flavor and aroma. Its scent is described as "slightly peppery with a hint of nutmeg" and flavor as "slightly nutty, sweet and peppery".

The color of annatto comes from various carotenoid pigments, mainly bixin and norbixin, found in the reddish waxy coating of the seeds. The condiment is typically prepared by grinding the seeds to a powder or paste. Similar effects can be obtained by extracting some of the color and flavor principles from the seeds with hot water, oil, or lard, which are then added to the food.

Annatto and its extracts are now widely used in an artisanal or industrial scale as a coloring agent in many processed food products, such as cheeses, dairy spreads, butter and margarine, custards, cakes and other baked goods, potatoes, snack foods, breakfast cereals, smoked fish, sausages, and more. In these uses, annatto is a natural alternative to synthetic food coloring compounds, but it has been linked to rare cases of food-related allergies. Annatto is of particular commercial value in the United States because the Food and Drug Administration considers colorants derived from it to be "exempt of certification".

The annatto tree B. orellana is believed to originate in tropical regions from Mexico to Brazil. It was probably not initially used as a food additive, but for other purposes such as ritual and decorative body painting (still an important tradition in many Brazilian native tribes, such as the Wari'), sunscreen, and insect repellent, and for medical purposes. It was used for Mexican manuscript painting in the 16th century.

Annatto has been traditionally used as both a coloring and flavoring agent in Latin America, the Caribbean, the Philippines, and other countries where it was taken home by Spanish and Portuguese explorers in the 16th century. It has various local names according to region. Its use has spread in historic times to other parts of the world, and it was incorporated in local culinary traditions of many countries outside the Americas.

Ground annatto seeds, often mixed with other seeds or spices, are used in the form of paste or powder for culinary use, especially in Latin American, Jamaican, Belizean, Chamorro, Vietnamese, and Filipino cuisines. In Mexican and Belizean cuisines, it is used to make the spice recado rojo. In Venezuela, annatto is used in the preparation of hallacas, huevos pericos, and other traditional dishes. In Puerto Rico it is often simmered with lard or olive oil to make annatto-oil or ground with other spices to make sazón and used in several dishes. Pasteles, arroz con gandules, and arroz junto in Puerto Rico also contain annatto where its one of the main ingredients. Annatto paste is an important ingredient of cochinita pibil, the slow-roasted pork dish popular in Mexico. It is also a key ingredient in the drink tascalate from Chiapas, Mexico. In the Philippines, it is used for the sauce of pancit. In Guam, it is used to make a staple rice dish flavored with annatto, onion, garlic, butter, and other spices. 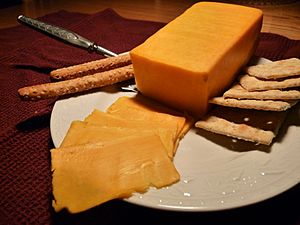 Annatto is used currently to impart a yellow or orange color to many industrialized and semi-industrialized foods, including cheese, ice cream, bakery products, desserts, fruit fillings, yogurt, beverages, butter, oils, margarines, processed cheese, and fat-based products. In the European Union, it is identified by the E number E160b.

In cheese, the yellow and orange hues naturally vary throughout the year as the cow's feed changed: in the summer, with fresh grass and its natural carotene content, the milk produced would have a natural orange tint, as would the cheese made from it, while at other times of the year, the tint would be greatly reduced. As the pigment is carried in the cream, skimming the milk, which some farmers did to make butter or to sell it separately, the lesser-quality cheese from such milk would be white.

To fool the consumer, the cheesemakers introduced colorants to imitate the more intense colors of the finer summer cheese. Initially these colors came from saffron, marigold, and carrot juice, but later annatto began being used.

In the 17th century, the Dutch, who had established colonies in Guyana, traded in food, particularly an orange-red natural colorant, annatto, with the indigenous communities. Zeeland traders under the authority of the West India Company bought annatto from the inhabitants of the coastal regions of Guyana and Suriname and sold it in the Netherlands as "verw". One contemporaneous description comes from Adriaen van Berkel, in a book published in 1695, though he does not mention whether it was used in cheese.

The earliest known documentation of annatto’s use in cheese is in a 1743 Dutch volume Huishoudelyk Woordboek (Household Word Book), according to American scientist Paul Kindstedt of the University of Vermont. Other historical documents from the period confirm that using annatto (then called "orleaan" or "orleans") to color cheese was being done by the mid-18th century.

England is another country that has used annatto to color their cheeses; colorants had been added to Gloucester cheese as early as the 16th century to allow inferior cheese to masquerade as the best Double Gloucester, with annatto later being used for that purpose. This usage was subsequently adopted in other parts of the UK, for cheeses such as Cheshire and Red Leicester, as well as colored Cheddar made in Scotland. Many cheddars are produced in both white and red (orange) varieties, with the latter being more popular despite the only difference between the two being the presence of annatto as a coloring. That practice has extended to many modern processed cheese products, such as American cheese and Velveeta. Cheeses from other countries also use annatto, including Mimolette from France and Leyden from the Netherlands.

Cheeses that use annatto in at least some preparations include:

Bixin, the major apocarotenoid of annatto

The yellow to orange color is produced by the chemical compounds bixin and norbixin, which are classified as carotenoids. The fat-soluble color in the crude extract is called bixin, which can then be saponified into water-soluble norbixin. This dual solubility property of annatto is rare for carotenoids. The seeds contain 4.5–5.5% pigment, which consists of 70–80% bixin. Unlike beta-carotene, another well-known carotenoid, annatto-based pigments are not vitamin A precursors. The more norbixin in an annatto color, the more yellow it is; a higher level of bixin gives it a more orange shade.

In the United States, annatto extract is listed as a color additive "exempt from certification" and is informally considered to be a natural coloring. Foods colored with annatto may declare the coloring in the statement of ingredients as "colored with annatto" or "annatto color."

Annatto condiments and colorants are safe for most people when used in food amounts, but they may cause allergic reactions in those who are sensitive. In one 1978 study of 61 patients suffering from chronic hives or angioedema, 56 patients were orally provoked by annatto extract during an elimination diet. A challenge was performed with a dose equivalent to the amount used in 25 grams (7⁄8 ounce) of butter. Twenty-six percent of the patients reacted to this color four hours after intake, worse than synthetic dyes such as amaranth (9%), tartrazine (11%), Sunset Yellow FCF (17%), Food Red 17 (16%), Ponceau 4R (15%), erythrosine (12%) and Brilliant Blue FCF (14%).

Annatto is not among the "Big Eight" substances causing hypersensitivity reactions (cow's milk, egg, peanuts, tree nuts, fish, shellfish, soy, and wheat), which are responsible for more than 90% of allergic food reactions. The Food and Drug Administration and experts at the Food Allergy Research and Resource Program (FARRP) at the University of Nebraska do not include annatto in the list of major food allergens.

All content from Kiddle encyclopedia articles (including the article images and facts) can be freely used under Attribution-ShareAlike license, unless stated otherwise. Cite this article:
Annatto Facts for Kids. Kiddle Encyclopedia.