Gloucester is a traditional, semi-hard cheese which has been made in Gloucestershire, England, since the 16th century. There are two varieties of the cheese, Single and Double; both are traditionally made from milk from Gloucester cattle. Both types have a natural rind and a hard texture, but Single Gloucester is more crumbly, lighter in texture and lower in fat. Double Gloucester is allowed to age for longer periods than Single, and it has a stronger and more savoury flavour. It is also slightly firmer. The flower known as Lady's Bedstraw (Galium verum), was responsible for the distinctively yellow colour of Double Gloucester Cheese.

Most Double Gloucester sold in UK supermarkets is slab cheese, made in large creameries operated by major dairy companies such as Dairy Crest. Supermarkets normally sell Double Gloucester under their own store brand. This version of the cheese is pasteurised, but not processed. 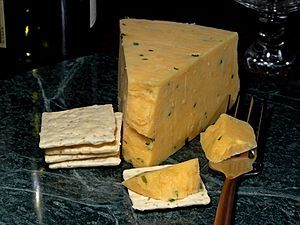 Double Gloucester is often blended with other ingredients. One variety made by blending with chives and spring onions has been marketed as Cotswold cheese, though this is not a traditional English cheese name. This cheese is supposedly coloured similarly to Cotswold stone.

Huntsman cheese, also known as Stilchester, is made with alternating layers of Double Gloucester and Stilton.

Origin of double and single names

The reason for the two types of Gloucester cheese being called 'double' and 'single' is not known. The main theories are:

Double Gloucester cheese is also used every spring for the Cooper's Hill Cheese-Rolling and Wake, in which competitors chase a cheese down a steep Gloucestershire hillside; the first person to reach the bottom of the 50% gradient, 200 yards (180 m) slope wins the cheese.

All content from Kiddle encyclopedia articles (including the article images and facts) can be freely used under Attribution-ShareAlike license, unless stated otherwise. Cite this article:
Gloucester cheese Facts for Kids. Kiddle Encyclopedia.