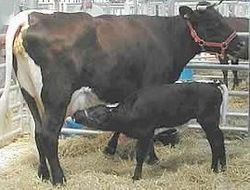 Gloucester cattle are a breed of dairy and beef cattle originating from Gloucestershire and surrounding areas in the West Country of England.

They are large cattle, coloured a rich dark brown in the cows, calves and steers, and almost black in the bulls. They have a white belly and a white finching stripe along the spine and continuing over the tail, and they normally have well-developed white horns with black tips.

Cattle of similar type were numerous in the Cotswold Hills and the Severn Valley of England as early as the 13th century. They were valued for their milk (used for Gloucester cheeses), for providing strong and docile draught oxen and finally for their beef.

By 1972 only one significant herd remained and the breed was in danger of dying out. The Gloucester Cattle Society was revived in 1973 and the breed has moved from near extinction to being rated by the Rare Breeds Survival Trust as being "At Risk", as there are still fewer than 750 registered breeding females. In 2021, the RBST said herd numbers had further halved between 2006 and 2020 due to fewer farmers breeding them, with only 26 herds as of April 2021.

Glamorgan cattle, from the adjacent parts of Wales, are another rare breed of similar type with similar colouration.

All content from Kiddle encyclopedia articles (including the article images and facts) can be freely used under Attribution-ShareAlike license, unless stated otherwise. Cite this article:
Gloucester cattle Facts for Kids. Kiddle Encyclopedia.