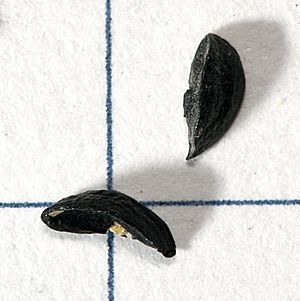 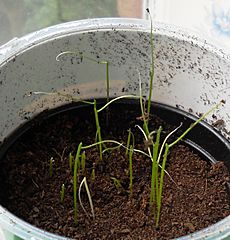 Chives is the common name of Allium schoenoprasum, an edible species of the Allium genus. Its close relatives include the garlic, shallot, leek, scallion, and Chinese onion.

A perennial plant, it is widespread in nature across much of Europe, Asia, and North America.

Chives are a commonly used herb and can be found in grocery stores or grown in home gardens.

Retzius also describes how farmers would plant chives between the rocks making up the borders of their flowerbeds, to keep the plants free from pests (such as Japanese beetles).

The medicinal properties of chives are similar to those of garlic, but weaker; the faint effects in comparison with garlic are probably the main reason for their limited use as a medicinal herb. They also have mild stimulant, diuretic, and antiseptic properties. As chives are usually served in small amounts and never as the main dish, negative effects are rarely encountered, although digestive problems may occur following overconsumption.

Chives are cultivated both for their culinary uses and their ornamental value; the violet flowers are often used in ornamental dry bouquets. The flowers are also edible and are used in salads, or used to make Blossom vinegars.

In cold regions, chives die back to the underground bulbs in winter, with the new leaves appearing in early spring. Chives starting to look old can be cut back to about 2–5 cm. When harvesting, the needed number of stalks should be cut to the base. During the growing season, the plant continually regrows leaves, allowing for a continuous harvest.

Chives have been cultivated in Europe since the Middle Ages (fifth until the 15th centuries), although their usage dates back 5000 years. They were sometimes referred to as "rush leeks".

All content from Kiddle encyclopedia articles (including the article images and facts) can be freely used under Attribution-ShareAlike license, unless stated otherwise. Cite this article:
Chives Facts for Kids. Kiddle Encyclopedia.