Colby is a semi-hard cow's milk cheese from the United States, with a nutty flavour and an orange colour. It is similar to Monterey Jack cheese. 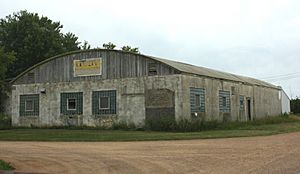 Original factory southwest of the city of Colby (2012) 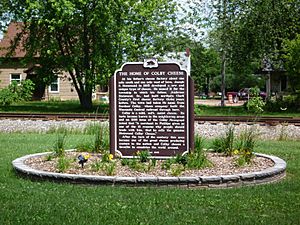 A marker in Colby, Wisconsin, notes the town's relationship to the cheese.

In 1885, Joseph F. Steinwand developed a new type of cheese at his father's cheese factory near Colby, Wisconsin. The cheese was named after the village, which had been founded three years earlier. Colby-style cheese is now widely available, and some of it is still produced in Colby.

A festival commemorating the cheese is held every year in mid-July, where all local food booths offer free Colby cheese.

On August 12, 2015, the original cheese factory was torn down leaving only the foundations of the building, which can still be seen today on the corner of Colby Factory Road and Highline Avenue just outside Colby.

Colby cheese is similar to cheddar cheese but does not undergo the cheddaring process. Considered a semi-hard cheese, Colby is softer, moister, and milder than cheddar because it is produced through a washed-curd process: the whey is replaced with water during the cooking time, reducing the curd's acidity and resulting in Colby's characteristically mild flavor. As with most other cheeses, it takes more than one U.S. gallon of milk to produce a single pound of cheese (over eight litres of milk per kilogram of cheese).

Monterey Jack cheese is produced almost identically to Colby, but Colby is seasoned with annatto, which imparts a sweet nutty flavor and an orange color.

Longhorn is a style of American Colby cheeses. "Longhorn" refers to the long orange cylindrical shape of the cheese. Colby is available in its original shape and in rectangles and half rounds. Colby is not aged and dries out quickly.

Because it is such a mildly flavored cheese, Colby is seldom used in cooking. It is typically used as a table cheese, for grating and grilling, and in snacks and salads.

Colby is sometimes mixed with Monterey Jack to produce a marbled cheese called Colby-Jack or Co-Jack. Pinconning cheese is a sharp aged relative of Colby.

All content from Kiddle encyclopedia articles (including the article images and facts) can be freely used under Attribution-ShareAlike license, unless stated otherwise. Cite this article:
Colby cheese Facts for Kids. Kiddle Encyclopedia.