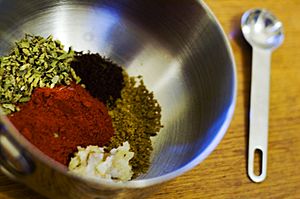 Recado rojo or achiote paste is a popular blend of spices. It is now strongly associated with Mexican and Belizean cuisines, especially of Yucatán and Oaxaca. The spice mixture usually includes annatto, oregano, cumin, clove, cinnamon, black pepper, allspice, garlic, and salt. The annatto seeds dye the mixture red, and impart a distinctive red-orange color to the food.

The paste is dissolved in either lemon juice, water, oil, or vinegar, used as a marinade for meat, or rubbed directly upon it. The meat is then grilled, baked, barbecued, or broiled. Sometimes, it is added to corn dough to create a zesty flavor and color in empanadas and red tamales. It may also be an ingredient when making tacos al pastor or chorizo.

A similar condiment, called sazón ("seasoning"), is commonly used in the cuisine of Puerto Rico for meats and fish. It is made from annatto seeds ground with cumin, coriander seeds, garlic powder, and salt.

All content from Kiddle encyclopedia articles (including the article images and facts) can be freely used under Attribution-ShareAlike license, unless stated otherwise. Cite this article:
Recado rojo Facts for Kids. Kiddle Encyclopedia.