Al pastor (from Spanish, "shepherd style"), also known as tacos al pastor, is a taco made with spit-grilled pork. Cooking method is based on the lamb shawarma brought by Lebanese immigrants to Mexico, al pastor features a flavor palate that uses traditional Mexican marinade adobada. It is a popular street food that has spread to the United States. In some places of northern Mexico and coastal Mexico, such as in Baja California, Mexico, it is known as taco de adobada. A similar dish from Puebla that uses a combination of middle eastern spices and indigenous central Mexican ingredients is called tacos árabes.

During the 19th century, variations of a vertically-grilled meat dish, now known by several names, started to spread throughout the Ottoman Empire. A wave of Lebanese immigrants to Mexico, mainly Christians such as the Maronites who have no religious dietary restrictions on eating pork, arrived in the late 19th and early 20th centuries, and introduced the Arab version, shawarma. In the 1960s, Mexican-born progeny of these immigrants began opening their own restaurants and combining their heritage with Mexican cuisine. Being derived from shawarma, it is also similar to the Turkish döner kebab and the Greek gyros.

A slice of fresh onion and a pineapple are characteristically placed on top the rotisserie. Meat is thinly sliced off the spit with a large knife into a small corn tortilla and served with finely chopped onions, cilantro, and diced pineapple. A wedge of lemon or lime and a salsa are optional condiments. This meat is also a common ingredient in gringas, alambres, huaraches, tortas, and pizza. 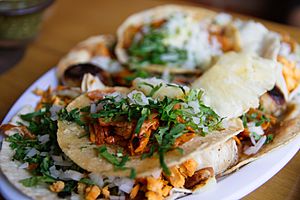 In some places of northern Mexico, such as Nuevo León, Durango and Chihuahua, these are usually called tacos de trompo if served on corn tortillas, and gringas if they are served with cheese on flour tortillas.

A similar dish is called tacos árabes, which originated in Puebla in the 1930s from Arab Mexicans cuisine. Tacos árabes use shawarma-style meat carved from a spit, but are served in a pita-style bread called pan árabe. These tacos have been brought by Mexican immigrants to the United States in the past few years and have become popular in cities such as Chicago and Los Angeles, two of the largest Mexican/Mexican-American population centers in the United States.

A chicken version marinated in the "al pastor" style was brought back to the Middle East in the early 2000s, and sold as "shawarma mexici". It is typically served in the Middle Eastern style, wrapped with garlic mayonnaise, dill pickle, and french fries in a thin flatbread.

All content from Kiddle encyclopedia articles (including the article images and facts) can be freely used under Attribution-ShareAlike license, unless stated otherwise. Cite this article:
Al pastor Facts for Kids. Kiddle Encyclopedia.