Alambre is a popular Mexican dish consisting of grilled beef topped with chopped bacon, bell peppers, onions, cheese, salsa and, in some variations, avocado. It is usually served with freshly made corn or flour tortillas. The most common ingredient is beef, and other kinds of meat such as chicken or pork are also used. Some recipes even substitute chopped ham or chorizo instead of the bacon. Alambres are popular in many parts of Mexico, especially in Mexico City, Oaxaca, and among Mexican-American populations across the United States. 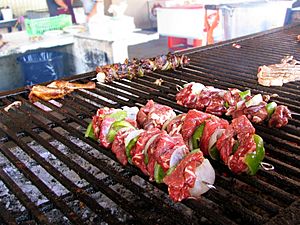 The word alambre literally means "wire" in Spanish. It is commonly believed that the name refers to the act of skewering the ingredients while cooking, although this is not always the case.

All content from Kiddle encyclopedia articles (including the article images and facts) can be freely used under Attribution-ShareAlike license, unless stated otherwise. Cite this article:
Alambre Facts for Kids. Kiddle Encyclopedia.