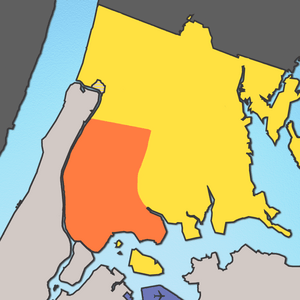 South Bronx in orange; the rest of the borough is in yellow. The actual boundaries are undefined. 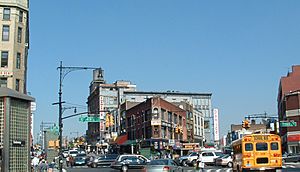 The Hub is the retail heart of the South Bronx.

The South Bronx is an area of the New York City borough of the Bronx. As the name implies, the area comprises neighborhoods in the southern part of the Bronx, such as Mott Haven, Melrose, and Port Morris. Formerly a deteriorating, poverty-stricken area, the South Bronx is now known for its hip hop culture and its graffiti.

See also: Timeline of the Bronx

The South Bronx was originally called the Manor of Morrisania, and later Morrisania. It was the private domain of the powerful and aristocratic Morris family, which includes Lewis Morris, signer of the Declaration of Independence, and Gouverneur Morris, penman of the United States Constitution. The Morris memorial is at St. Ann's Church of Morrisania. Morris' descendants own land in the South Bronx to this day.

As the Morrises developed their landholdings, an influx of German and Irish immigrants populated the area. Later, the Bronx was considered the "Jewish Borough," and at its peak in 1930 was 49% Jewish. The term was first coined in the 1940s by a group of social workers who identified the Bronx's first pocket of poverty, in the Port Morris section, the southernmost section of the Bronx.

After World War II, as white flight accelerated and migration of ethnic and racial minorities continued, the South Bronx went from being two-thirds non-Hispanic white in 1950 to being two-thirds black or Puerto Rican in 1960. Originally denoting only Mott Haven and Melrose, the South Bronx extended up to the Cross Bronx Expressway by the 1960s, encompassing Hunts Point, Morrisania, and Highbridge. 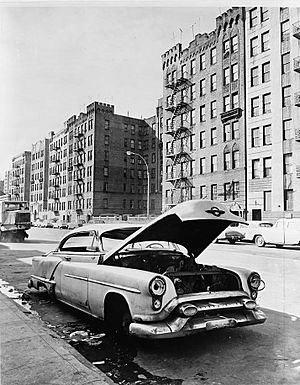 Macombs Road in Morris Heights, circa 1964

The South Bronx is a place for working-class families. Its image as a poverty-ridden area developed in the latter part of the 20th century. There were several factors contributing to the decay of the South Bronx: white flight, landlord abandonment, economic changes, demographics and also the construction of the Cross Bronx Expressway.

The Cross Bronx Expressway, completed in 1963, was a part of Robert Moses’s urban renewal project for New York City. The expressway is now known to have been a factor in the extreme urban decay seen by the borough in the 1970s and 1980s. Cutting through the heart of the South Bronx, the highway displaced thousands of residents from their homes, as well as several local businesses. The neighborhood of East Tremont, in particular, was completely destroyed by the Expressway. Others have argued that the construction of such highways has not harmed communities.

The already poor and working-class neighborhoods were further disadvantaged by the decreasing property value, in combination with increasing vacancy rates. Racially charged tension, during the Civil Rights Movement of the 1950s and 1960s, further contributed to middle-class flight and the decline of many South Bronx neighborhoods. As a result of new policies demanding that, for racial balance in schools, children be bused into other districts, parents who worried about their children attending the demographically adjusted schools often relocated to the suburbs, where this was not a concern. Some neighborhoods were considered undesirable by homeowners in the late 1960s and the area's population began decreasing. In addition, post World War II, rent control policies have been proposed by one author as contributing to the decline, by giving building owners little motivation to keep up their properties. New York mayor, John Lindsay (1966-1973), suggested that lack of education and high unemployment, limited the housing options for the remaining low income tenants and that this prompted the reduced upkeep by landlords. In either case, while desirable housing options were scarce, vacancies further increased. In the late 1960s, by the time the city decided to consolidate welfare households in the South Bronx, its vacancy rate was already the highest of any place in the city. 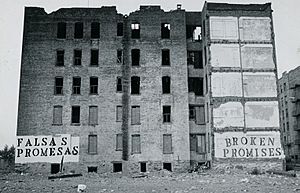 In the 1970s significant poverty reached as far north as Fordham Road. Around this time, the Bronx experienced some of its worst instances of urban decay, with the loss of 300,000 residents and the destruction of entire city blocks' worth of buildings. The media attention brought the South Bronx into common parlance nationwide.

The phrase "The Bronx is burning," attributed to Howard Cosell during Game 2 of the 1977 World Series featuring the New York Yankees and Los Angeles Dodgers, refers to the arson epidemic caused by the total economic collapse of the South Bronx during the 1970s. During the game, as ABC switched to a generic helicopter shot of the exterior of Yankee Stadium, an uncontrolled fire could clearly be seen burning in the ravaged South Bronx surrounding the park, leading Cosell to intone, "There it is, ladies and gentlemen, the Bronx is burning." 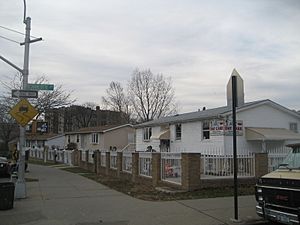 Beginning in the late 1980s, parts of the South Bronx started to experience urban renewal with rehabilitated and brand new residential structures, including both subsidized multifamily town homes and apartment buildings. The Bright Temple A.M.E. Church was listed on the National Register of Historic Places in 1983. Over 1 billion US dollars were spent on rebuilding the area through the 1990s, with 19,000 apartments having been refurbished and more than 4,500 new houses having been built for the working class. More than fifty abandoned apartment buildings on the Major Deegan Expressway and the Cross Bronx Expressway were renovated for residential use. Over 26,500 people moved into the area. On Charlotte Street, prefabricated ranch-style homes were built in the area in 1985, and the area had changed so significantly that the Bronx borough historian could not locate where Carter had stopped to survey the scene. As of 2004, homes on the street were worth up to a million dollars. 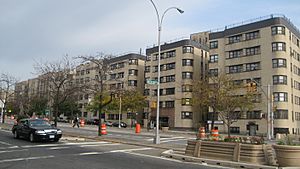 Art deco apartment buildings on the Grand Concourse, where a historic district is under consideration

The Bronx County Courthouse has secured Landmark status, and efforts are underway to do the same for much of the Grand Concourse, in recognition of the area’s Art Deco architecture. In June 2010, the city Landmarks Preservation Commission gave consideration to establishment of a historic district on the Grand Concourse from 153rd to 167th Street. A final decision was expected in the coming months.

Construction of the new Yankee Stadium has stirred controversy over plans which, along with the new billion-dollar field, include new athletic fields, tennis courts, bicycle and walking paths, stores, restaurants, and a new Metro-North Railroad station at East 153rd Street. The station, during baseball season, helps ease overcrowding on the subway.

There is hope that these developments also will help to generate residential construction. However, the new park comes at a price: a total of 22 acres (89,000 m2) in Macombs Dam and John Mullaly Parks were sacrificed to build it. In April 2012, Heritage Field, a 50.8 million dollar ballpark, was built atop the grounds of the original Yankee Stadium.

The population of the South Bronx is currently increasing. However, one out of two residents lives in poverty. Its precincts have recorded high violent crime rates and are all considered to be New York City Police Department "impact zones." 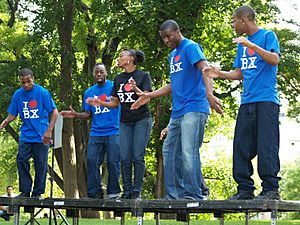 Since the late 1970s the South Bronx has been home to a renewed grassroots art scene. The arts scene that sprouted at the Fashion Moda Gallery, founded by a Viennese artist, Stefan Eins, helped ignite the careers of artists like Keith Haring and Jenny Holzer, and 1980s break dancers like the Rock Steady Crew. It generated enough enthusiasm in the mainstream media for a short while to draw the art world's attention. The Bronx Academy of Arts and Dance was located in the American Bank Note Company Building in the South Bronx neighborhood of Hunts Point before relocating to St. Peter's Episcopal Church in Westchester Square.

Modern graffiti is prominent in the South Bronx, and is home to many of the fathers of graffiti art such as Tats Cru. The Bronx has a very strong graffiti scene despite the city's crackdown on illegal graffiti. The rise of hip-hop music, rap, breakdancing, and disc jockeying helped put the South Bronx on the musical map in the early 1980s. The South Bronx is also known worldwide as the birthplace of hip-hop culture. In addition, the Bronx Museum of the Arts is located on the Grand Concourse. 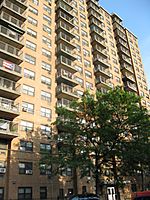 1520 Sedgwick Avenue, Recognized as a long-time "haven for working-class families," in 2010 the New York Times reported that it is the "accepted birthplace of hip hop."

Hip hop is a broad conglomerate of artistic forms that originated as a specific street subculture within South Bronx communities during the 1970s in New York City. Hip hop as music and culture formed during the 1970s when block parties became increasingly popular in New York City, particularly among African American and Latin Americans residing in the Bronx. Block parties incorporated DJs who played popular genres of music, especially funk and soul music. Due to the positive reception, DJs began isolating the percussive breaks of popular songs. This technique was then common in Jamaican dub music, and was largely introduced into New York by immigrants from Jamaica and elsewhere in the Caribbean, including DJ Kool Herc, who is generally considered the father of hip hop.

1520 Sedgwick Avenue is a 102-unit apartment building in the Morris Heights neighborhood in The Bronx borough of New York City. Recognized as a long-time "haven for working-class families," in 2010 the New York Times reported that it is the "accepted birthplace of hip hop." As hip hop grew from throughout the Bronx, 1520 was a starting point where Clive Campbell, later known as DJ Kool Herc, presided over parties in the community room at a pivotal point in the genre's history. DJ Kool Herc is credited with helping to start hip hop and rap music at a house concert at 1520 Sedgwick Avenue on August 11, 1973. At the concert he was DJing and emceeing in the recreation room of 1520 Sedgwick Avenue. Sources have noted that while 1520 Sedgwick Avenue was not the actual birthplace of hip hop—the genre developed slowly in several places in the 1970s—it was verified to be the place where one of the pivotal and formative events occurred that spurred hip hop culture forward. During a rally to save the building, DJ Kool Herc said, "1520 Sedgwick is the Bethlehem of Hip-Hop culture."

On July 5, 2007, 1520 Sedgwick Avenue was recognized by the New York State Office of Parks, Recreation and Historic Preservation as the "Birthplace of Hip-Hop."

A South Bronx Greenway is planned to connect south to Randalls Island and north along the Bronx River.

In 2000, 77.3% of all households in New York's 16th congressional district, covering the South Bronx, did not own automobiles, Citywide, the percentage is 55%.

All content from Kiddle encyclopedia articles (including the article images and facts) can be freely used under Attribution-ShareAlike license, unless stated otherwise. Cite this article:
South Bronx Facts for Kids. Kiddle Encyclopedia.