Highbridge is a residential neighborhood geographically located in the central-west section of the Bronx, New York City. Its boundaries, starting from the north and moving clockwise, are the Cross-Bronx Expressway to the north, Jerome Avenue to the east, Macombs Dam Bridge to the south, and the Harlem River to the west. Ogden Avenue is the primary thoroughfare through Highbridge.

The neighborhood is part of Bronx Community Board 4, and its ZIP Code is 10452. The local subway is the IND Concourse Line (B D trains), operating along the Grand Concourse, and the IRT Jerome Avenue Line (4 train), operating along Jerome Avenue. The area is patrolled by the New York City Police Department's 44th Precinct. NYCHA property in the area is patrolled by P.S.A. 7 at 737 Melrose Avenue in the Melrose section of the Bronx.

Prior to the 1960s, Highbridge was a predominantly Irish American neighborhood. Today the vast majority of residents in the area are of Dominican, Puerto Rican and African American descent. Almost 40% of families live below the federal poverty line.

The entirety of Community District 4, which comprises Highbridge and Concourse, had 155,835 inhabitants as of NYC Health's 2018 Community Health Profile, with an average life expectancy of 78.6 years. This is lower than the median life expectancy of 81.2 for all New York City neighborhoods. Most inhabitants are youth and middle-aged adults: 27% are between the ages of between 0–17, 29% between 25–44, and 23% between 45–64. The ratio of college-aged and elderly residents was lower, at 11% and 10% respectively.

Highbridge is dominated by townhouses and 5 and 6-story apartment buildings. The total land area is roughly one square mile. The terrain is elevated and very hilly. Stair streets connect areas located at different elevations. The neighborhood has dozens of community gardens occupying lots that were left vacant between the 1970s and 1990s, such as Taqwa Community Farm.

The neighborhood takes its name from the High Bridge built in 1848 by Irish immigrants to carry Croton Aqueduct water across the Harlem River. Up until the late 1960s, the residents of Highbridge were predominantly of Irish, Italian and Eastern European Jewish descent. They have since been replaced by large numbers of Hispanics and African Americans. 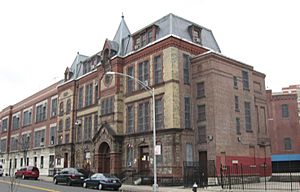 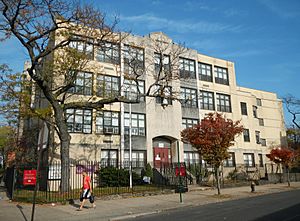 All content from Kiddle encyclopedia articles (including the article images and facts) can be freely used under Attribution-ShareAlike license, unless stated otherwise. Cite this article:
Highbridge, Bronx Facts for Kids. Kiddle Encyclopedia.