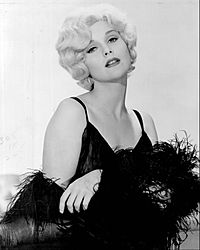 Lynley was best known for her movie roles in Return to Peyton Place, Under the Yum Yum Tree, Bunny Lake is Missing, The Pleasure Seekers, The Cardinal, and The Poseidon Adventure, in which she performed the Oscar-winning song "The Morning After".

In 1960, she married Michael Selsman. They had one child. The couple divorced in 1964. Lynley had an 18-year intermittent affair with English broadcaster and writer David Frost.

Lynley died of a heart attack on September 3, 2019 at her home in Pacific Palisades, California at the age of 77.

All content from Kiddle encyclopedia articles (including the article images and facts) can be freely used under Attribution-ShareAlike license, unless stated otherwise. Cite this article:
Carol Lynley Facts for Kids. Kiddle Encyclopedia.