The US$500 million shopping center, which was completed in 2009, saw the construction of new buildings and two smaller buildings, one new and the other a renovation of an existing building that was part of the original market. The two main buildings are linked by a six-level garage for 2,600 cars. The center's design has earned a Leadership in Energy and Environmental Design (LEED) Silver award.

Bronx Terminal Market is just south of Yankee Stadium under the Major Deegan Expressway, on a wide road named Exterior Street. As early as 1914, Cyrus C. Miller, the former Bronx Borough President, had advocated the creation of a terminal market in New York City. Construction on the market started, but not completed until Fiorello La Guardia took office as mayor. During his tenure, he enacted a program constructing various markets to provide a home for the city's numerous pushcart vendors. Between October 1, 1934, and May 1, 1935, the city built a new complex just south of the existing unfinished structure. Bronx Terminal Market consisted of small two-story concrete buildings of simple design. Designed by Samuel A. Oxhandler with John D. Churchill and Albert W. Lewis, the buildings were originally painted light yellow. In 1936, the market's flagship structure went up, a small, cubist-style polygon at 149th Street with "Bronx Terminal Market" in large relief in the concrete. This building was designed to serve as a bank and, upstairs, a hotel for farmers. A car float brought in rail cars by barge to the market. 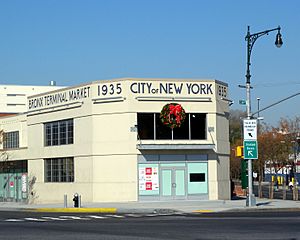 On December 21, 1935, La Guardia appeared at the market to proclaim a citywide ban on the sale, display, and possession of artichokes. The ban was instituted to combat the inflation of artichokes set by mobsters, namely Ciro Terranova. The ban was lifted within a year.

The market eventually grew to become the nation's largest wholesale market for Hispanic foods. The market went into steady decline and became a financial burden for the City in the late 1960s. When City began demolishing the market, however, Bronx Terminal Market Merchants Association approached developer David Buntzman for help to save it. Buntzman obtained a 99-year lease to the market in 1972 and operated it until 2004. In the market's heyday, it contained nearly 100 tenants and more than 1,000 employees. After a series of protracted legal battles with the City, Buntzman sold his interest to the Related Companies for $42.5 million in 2004. 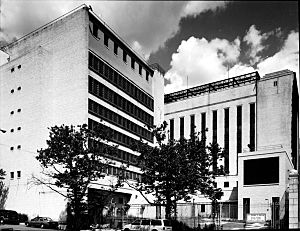 The former Bronx House of Detention

The nearby 350-cell Bronx County Jail, designed by Joseph Freedlander was built as a Works Progress Administration project and opened in 1937. Later known as the Bronx House of Detention, it was known for its elaborate art deco architectural details. It closed in 2000 and was later acquired by the Related Companies, who demolished it to make way for the new Bronx Terminal Market; some architectural details of the building were saved.

On August 14, 2006, construction began on Bronx Terminal Market, then known as Gateway Center at Bronx Terminal Market, which demolished all buildings on the acquired properties with the exception of the Prow Building, a 20,500-square-foot (1,900 m2) building at the corner of East 149th Street, Exterior Street, and River Avenue. The center was approved after a Community Benefits Agreement was signed. The Home Depot was the first tenant/anchor to move in on April 23, 2009, the second tenant (and anchor) was BJ's which opened on August 1, and then the rest of the mall opened on September 12. The original tenants at the mall included several restaurants, a Chase bank, many stores taking up the third floor, and more anchor stores including Bed Bath & Beyond (its first and only store in the Bronx), Best Buy, BJ's, Marshalls, Raymour & Flanigan, Toys "R" Us (the first "R" Superstore in New York), Staples, and Target.

In September 2012, Staples announced that it would close 30 stores in the United States, including the Bronx Terminal Market location. It closed a year later.

A StubHub location, at the Bronx Terminal Market, opened in July 2013 following a lawsuit that prevented them from opening a location near the Yankee Stadium due to the state's anti-scalping law.

In October 2018, it was announced that Food Bazaar was moving into the former Toys "R" Us at the Bronx Terminal Market. It was originally scheduled to open in Spring 2019, but instead opened in January 2020. It is the largest supermarket in the Bronx.

In December 2019, a new universal hip hop museum, the Revolution of Hip Hop, opened at the Bronx Terminal Market.

In January 2020, it was announced that Bed Bath & Beyond at the Bronx Terminal Market would be closing at the end of March 2020. 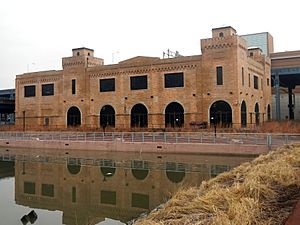 All content from Kiddle encyclopedia articles (including the article images and facts) can be freely used under Attribution-ShareAlike license, unless stated otherwise. Cite this article:
Bronx Terminal Market Facts for Kids. Kiddle Encyclopedia.