Morris Heights is a residential neighborhood located in the West Bronx. Its boundaries, starting from the north and moving clockwise are: West Burnside Avenue to the north, Jerome Avenue to the east, the Cross-Bronx Expressway to the south, and the Harlem River to the west. University Avenue is the primary thoroughfare through Morris Heights.

Morris Heights has a population of around 36,779. Almost half the population lives below the poverty line and receives public assistance (TANF, Home Relief, Supplemental Security Income, and Medicaid). The vast majority of residents in the area are of Hispanic or African American descent. The majority of households are renter occupied.

The entirety of Community District 5, which comprises Morris Heights, University Heights, and Fordham, had 136,151 inhabitants as of NYC Health's 2018 Community Health Profile, with an average life expectancy of 79.9 years. This is lower than the median life expectancy of 81.2 for all New York City neighborhoods. Most inhabitants are youth and middle-aged adults: 28% are between the ages of between 0–17, 29% between 25 and 44, and 23% between 45 and 64. The ratio of college-aged and elderly residents was lower, at 12% and 8% respectively. 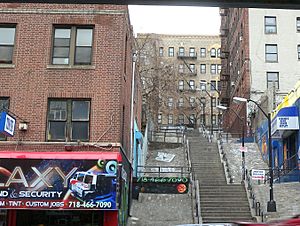 Morris Heights is dominated by 5 and 6-story tenement buildings, older multi-unit homes, vacant lots, and newly constructed subsidized attached multi-unit townhouses and apartment buildings. A significant percentage of the early 20th century housing stock was structurally damaged by arson and eventually razed by the city. The neighborhood contains one of the highest concentrations of NYCHA projects in the Bronx. The total land area is less than half one square mile. The terrain is elevated and very hilly. Stair streets connect areas located at different elevations. 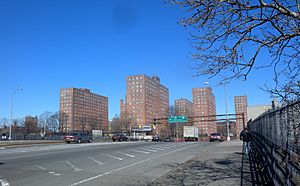 After a wave of arson ravaged the low-income communities of New York City throughout the 1970s, many if not most residential structures in Morris Heights were left seriously damaged or destroyed. The city began to rehabilitate many formerly abandoned tenement-style apartment buildings and designate them low-income housing beginning in the late 1970s. Also many subsidized attached multi-unit townhouses and newly constructed apartment buildings have been or are being built on vacant lots across the neighborhood. 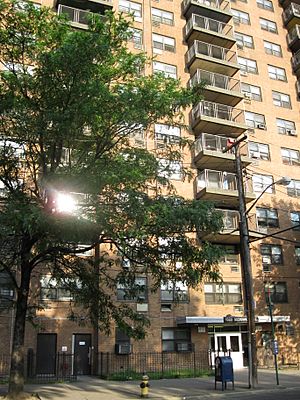 Morris Heights is believed to be the site where Hip Hop culture originated in the 1970s. However, in the late 1960s and early 1970s several disc jockeys protected by the Black Spades (a violent but organized gang that promoted their own form of justice; originally from Bronxdale Housing Projects & later recruited several members from Bronx River Housing Projects), and other gangs took their DJ led block parties in the South Bronx, the East Side of the Bronx and the West Side. 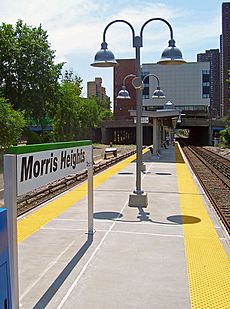 Morris Heights and Fordham generally have a lower rate of college-educated residents than the rest of the city as of 2018[update]. While 10% of residents age 25 and older have a college education or higher, 34% have less than a high school education and 46% are high school graduates or have some college education. By contrast, 26% of Bronx residents and 43% of city residents have a college education or higher. The percentage of Morris Heights and Fordham students excelling in math rose from 19% in 2000 to 43% in 2011, and reading achievement increased from 24% to 28% during the same time period.

The New York Public Library (NYPL) operates the Sedgwick branch at 1701 Martin Luther King Jr. Boulevard. The branch first opened in the Sedgwick Houses in 1951 before moving to its present two-story building in 1994.

All content from Kiddle encyclopedia articles (including the article images and facts) can be freely used under Attribution-ShareAlike license, unless stated otherwise. Cite this article:
Morris Heights, Bronx Facts for Kids. Kiddle Encyclopedia.