City Island is located at the extreme western end of Long Island Sound, south of Pelham Bay and east of Eastchester Bay. The body of water between City Island and the even smaller (and uninhabited) Hart Island to the east is known as City Island Harbor. The small island adjacent to the northeast is High Island. The Stepping Stones Light, marking the main shipping channel into New York, is off the southern tip of the island, near the Long Island shore. It is part of the Pelham Islands, a group of islands once belonging to Thomas Pell. 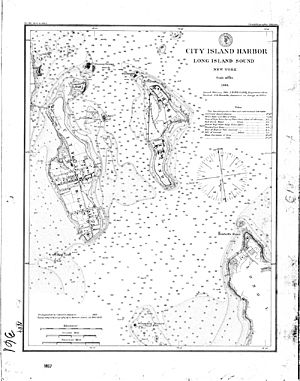 Originally inhabited by the Siwanoy band of Lenape Indians, City Island later was settled by Europeans as part of property and estate bought by English nobleman Thomas Pell in 1654. Prior to that, English settlers led by Anne Hutchinson (seeking religious freedom) settled in an area nearby on the river (now known as the Hutchinson River) in 1642. After changing hands several times, in 1761 the Island (at that time known as Minefer's Island), was bought by Benjamin Palmer of New York. Up to this point the island had been inhabited by only a few homes and farms. It had a population of about 1000 people, who tended farms and livestock. Palmer had the vision of developing the island into a port, which could rival that of New York. He knew that ships heading north and south passed City Island using Long Island Sound as a safe inshore waterway. He envisioned shipyards, and stores that could cater to the ships. He went as far as to have the island mapped out in different plots designated as shipyards, docks, business, farms, homes, schools, and houses of worship, along with streets, paths, and access routes. Benjamin Palmer appealed to the British Crown and received letters patent that covered the ownership of waterfront properties 400 feet out from the high tide mark under water and around the perimeter of the Island. This patent, known as the "Palmer Grant" is unique to City Island; it has been contested in courts since, but has always been upheld.

Palmer also is responsible for changing the name from Minefer's Island to City Island in anticipation of things to come. Palmer's vision never fully materialized, however, as the timing just before the American Revolution halted all progress, and the war depleted the capital of Palmer and his investors. It would be another sixty years before the island again started to be developed when oystermen, pilots of Hell Gate, a set of nearby narrows, and eventually shipbuilders arrived and introduced these industries. 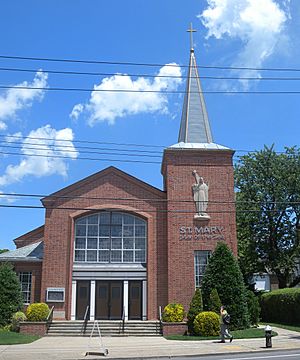 Most businesses are clustered along the central City Island Avenue. There are two small supermarkets, a gas station, a pharmacy, a bank, a hardware store, and a variety of other small shops. The island is most famous for its numerous seafood restaurants and antique stores, which line both sides of the avenue.

At the southernmost section of City Island is Belden Point, named for William Belden, a developer who opened an amusement park and resort in the area in 1887. In the early part of the 20th century, the area was a favored recreation location for business tycoons including Vincent Astor, J.P. Morgan and William Randolph Hearst. Today, Belden Point is home to a number of popular seafood restaurants. A new public greenspace was dedicated in 2016 at its waterfront tip.

Government services include the City Island Station post office (10464) and a FDNY firehouse (Engine 70, Ladder 53). The New York City Police Department presence (mostly traffic control on summer weekends) is provided by the 45th Precinct, located in the mainland Bronx. The City Island Branch is possibly the smallest of the New York Public Library system, even after the recent expansion which doubled the size of the building.

A local paper, The Island Current, is printed ten times a year, and chronicles mostly community issues and local news.

In 1960 City Island became the last community in New York City to get dial telephone service. Until then eight operators in a private home on Schofield Street connected all calls. The dial exchange began as TUlip 5, now 885.

City Island was created by glacial deposits at the end of the last ice age. There is a layer of bedrock and then a thick layer of red clay topped with sand, with topsoil above that. The southern end has deposits of rare blue clay. The area is strewn with glacial erratic boulders. Local bedrock is Manhattan schist with glacial striations.

The forms of animal life on the island are not much different than that of the surrounding region, and are typical of a suburban environment: raccoons, squirrels, rabbits, skunk, and occasional deer. Coyotes and turkeys have also been sighted.

The real diversity of wildlife on and around City Island is among birds, especially aquatic species. There are many varieties of duck; buffleheads, goldeneyes, mallards, and cormorants. Canada geese are common, as are mute swans, great blue herons, great white egrets, and several types of gull. A small protected wetlands area on west Ditmars Street is home to many of these species as well as the feral pigeon.

Bright green parrots (monk parakeets), originally imported from South America as pets, have adapted to the climate and breed in the wild in New York. They are a common sight on City Island and in nearby Pelham Bay Park. Flocks of wild turkeys also are often seen in the park. Deer are occasionally seen on the island, although more commonly in Pelham Bay Park. Another, nonnative species of the island is the brown or De Kay's snake, which has adapted to life among the island's growing community.

The island is famous for its seafood restaurants; lobster is a popular specialty. Over 30 eating establishments compete for business, ranging from fast food (Johnny's Reef), to The Lobster Box, to the French Bistro SK, and The Black Whale, famous for its desserts. The Snug is an Irish pub connected to the City Island Diner. While a few of the restaurants close during the winter months, most are open year-round. 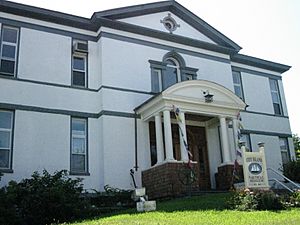 The City Island Nautical Museum displays maritime artifacts and antiques. It is located at 190 Fordham Street and is open only on Saturday and Sunday afternoons (other times by appointment). Admission is five dollars and there is a small gift shop. The building was PS17 in its prior life.

The Island has landmarks such as the Samuel Pell Mansion on City Island Avenue, near St. Mary Star of the Sea Church. It is where Arsenic and Old Lace (1969) was filmed for TV. There are a number of old Victorian mansions located throughout City Island, mostly on the Sound side, complete with tall pointy spires and gables with gazebos, such as Delmours Point on Tier Street.

The City Island Theater Group is the local community theater that produces shows year round.

City Island Gold Honey is produced by honeybees from the six hive apiary of the Kheck-Gannon family on Minnieford Avenue. It is marketed by the Kaleidoscope Gallery and Sugar And Spice Restaurant. 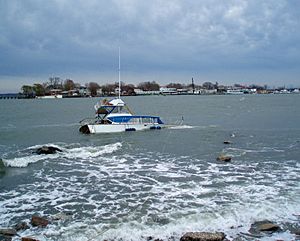 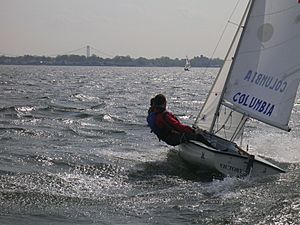 The island has what are called "special anchorages" where boats of all sizes are freely moored or anchored, and there are many docks with boat slips for mooring boats in a secure and restricted way. There are also many large piers around the island that can receive large ships.

The island is home to the Columbia University Sailing Team, whose fleet of dinghies is docked at City Island Yacht Club. The team comes from Manhattan four times a week to practice off the western shore of City Island. Fordham University's Sailing Team sails out of Morris Yacht and Beach Club. Many of the boats which competed and won in the America's Cup in years past were built in the Nevins Boat Yard on City Island. The Eastchester Bay Yacht Racing Association is the major organizer for sailboat races in the area. J/24 sailboats are the active one design racing fleet on the island.

A small fleet of head boats takes paying passengers on fishing trips to Long Island Sound. Smaller boats are also available for rent by the day. The sail and power boating industry has been declining in recent years, as boatyards are being sold and being converted into condominiums. 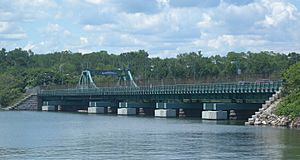 Starting in 1760, a small rope ferry ran between the mainland and City Island. In 1873 a bridge was built by a syndicate of City Island businessmen, including G.W. Horton, Ben Hedgeman, and David Carll. It was replaced by steel, three-lane City Island Bridge in 1901. The New York City Department of Transportation had proposed replacing it with a cable-stayed bridge hanging from a 160-foot tower but the design faced intense community opposition and the city submitted a redesign which was approved. A temporary bridge was opened in 2015 which allowed for the demolition of the old bridge and the future construction of its replacement.

There is another small, private bridge on the northeastern end of City Island connecting it to High Island, site of the radio transmitter for New York stations WFAN (660 AM) and WCBS (880 AM); a security gate prevents public access.

In the 1910s, the Pelham Park and City Island Railroad provided rail service to the island.

Bus transportation consists of the Bx29 local route, and two rush-hour extended round-trips of the BxM8 express route, both run by MTA New York City Bus. There is also the City Island Seaside Trolley run by the Bronx Tourism Council.

Since 2002, the film production company Harrington Talents has had its offices and studio located on City Island. Notable celebrities who have worked on their productions include rapper and actor Ice-T and professional wrestler Bruno Sammartino.

The novel The City Island Messenger, by James Gregory Kingston uses City Island as the backdrop for a story about a young boy delivering Western Union telegrams that break the sad news of soldiers' deaths to families over a span of a week during World War II, during the Battle of Midway.

In the novel Bluebeard, by Kurt Vonnegut, the character Dan Gregory states that his 80-foot (24 m) yacht, the Ararat, was dry-docked on City Island.

All content from Kiddle encyclopedia articles (including the article images and facts) can be freely used under Attribution-ShareAlike license, unless stated otherwise. Cite this article:
City Island, Bronx Facts for Kids. Kiddle Encyclopedia.