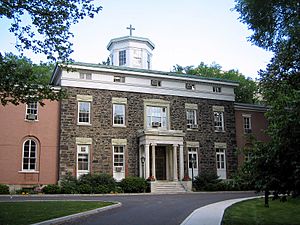 The Administration building on the campus.

Fordham University is a private research university in New York City, New York. The university has about 14,544 students. It was founded in 1841. The current president of the university is Reverend Joseph M. McShane S.J..

The athletics teams of the university are called the Rams. They have 22 varsity teams and they compete in the Atlantic 10 Conference for everything but football. In football Fordham competes in the Patriot League.

All content from Kiddle encyclopedia articles (including the article images and facts) can be freely used under Attribution-ShareAlike license, unless stated otherwise. Cite this article:
Fordham University Facts for Kids. Kiddle Encyclopedia.