Harrison is a coterminous town-village located in Westchester County, New York, United States, approximately 22 miles (35 km) northeast of Manhattan. The population was 28,218 at the 2020 census.

Harrison was established in 1696 by a patent granted by the British government to John Harrison and three others, who had a year earlier bargained with local Native Americans to purchase an area of land above Westchester Path (an old trail that led from Manhattan to Port Chester) and below Rye Lake. Local custom holds that Harrison was given 24 hours to ride his horse around the area he could claim, and the horse couldn't swim or didn't want to get its feet wet, but this is folklore. In fact, the land below Westchester Path and along Long Island Sound had already been purchased and partly developed by the settlers of Rye, NY.

The area that became Harrison had also been sold in 1661 or 1662, and again in 1666, to Peter Disbrow, John Budd, and other investors or early residents of Rye. Disbrow and Budd evidently lost their paperwork and the land was ultimately granted to Harrison and his co-investors in 1696. So upset were the people or Rye that they seceded to the Colony of Connecticut until 1700, when the King of England ordered Rye to rejoin the Colony of New York.

The first permanent residents of Harrison's Purchase, as it was called, arrived in about 1725, and many early settlers were Quakers, who set up a Friend's Meeting House at a settlement located in the part of Harrison now called Purchase. Harrison's Purchase was administered jointly by the settlers of Rye until it was incorporated as a town on March 7, 1788, by an act of the New York State legislature.

Merritt's Hill in West Harrison was the site of the Battle of White Plains during the Revolutionary War. Regiment 182 of the Continental Army, of the 367 regiments there, was the Harrison Regiment, composed solely of people from Harrison.

During the 1830s, David Haviland settled in Harrison where he produced Haviland China which he sold in his store in New York City before returning to his native France. Today there exists a Haviland Street in a neighborhood of Harrison known as "South Downtown", whose only street marker looks rather quite older than the rest in the town, composed of wrought iron in scrolled shapes.

In 1867 Benjamin Holladay purchased the land that is now Manhattanville College in Purchase. On the property is a Norman-style Roman Catholic chapel built for his wife. There is also Reid Castle, once called the Ophir House, before being renamed for a later purchaser. The castle hosted the King and Queen of Siam in the early 1930s. 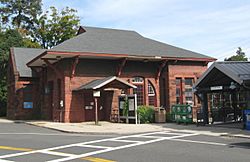 What is now the Metro-North Railroad's New Haven Line, running from Manhattan, New York City, to Greenwich, Connecticut, first came through Harrison in 1848, though the first station was not built until 1870. Before that time, Harrisonites had to flag down the train to get a ride. Harrison remained generally free of factories through the Industrial Revolution, while large factory districts grew in the neighboring towns of White Plains, Port Chester and Mamaroneck.

In 1929, the Hutchinson River Parkway was extended to Harrison.

In 1967, 200 residents stated support for a plan to incorporate Purchase, a community in Harrison, so that corporations could not build in the community. In response, officials from the Town of Harrison put forward plans to try to become a city to try to stop Purchase from seceding from Harrison. The resolution was for the Town became a hybrid "Town / Village," which it remains today.

John A. Passidomo (1921–2005) was first elected Mayor in 1965 by only 67 votes. Re-elected eight times, he served until 1983 when he resigned to become Commissioner of the New York State Department of Motor Vehicles. In his two and a half years at that job, he helped pass one of the nation's first seat-belt laws despite the law's unpopularity.

Harrison's "Platinum Mile", a string of corporate office parks along I-287 in the Purchase section of Harrison, developed under Passidomo. The mayor played an instrumental role in attracting large corporations such as PepsiCo, MasterCard and Texaco.

In the early 1970s, under Passidomo's supervision, a group in the Purchase section of town, concerned about the town's overdevelopment, attempted to incorporate as a village and thereby separate from the town of Harrison. Creatively, to avoid being served papers that would have begun the legal proceedings for Purchase to incorporate as a village, Passidomo entered his office through the fire escape. He then immediately made sure that the town Harrison became a village but remained as a town to end to the possibility of Purchase's secession, since a village cannot legally be formed in another village.

The list of supervisors/mayors begins at 1965; however, there were mayors before that.

The distance from Harrison Station to Grand Central Terminal in Midtown Manhattan is about 27 miles (43 km).

In the 2010 census the population was 76.9 percent non-Hispanic white, 2.4 percent African American, 7.5 percent Asian, and 11.7% Hispanic or Latino of any descent.

Harrison is also known for its large Italian American population.

There were 8,394 households of which 35.3% had children under the age of 18 living with them, 62.4% were married couples living together, 8.7% had a female householder with no husband present, and 26.3% were non-families. 22.1% of all households were made up of individuals and 8.7% had someone living alone who was 65 years of age or older. The average household size was 2.72 and the average family size was 3.20.

The boundaries of the town of Harrison are the approximate shape of a figure-eight. The southern half is known as simply Harrison, or downtown, while the hamlet of Purchase is located in the northern portion of the town. "West Harrison" is a neighborhood south of Purchase, further west, bounded by Silver Lake, the Brae Burn Golf Course, and I-287. The "downtown" southern half of Harrison is divided into four general areas: The Brentwood, Sunnyridge, Sterling Ridge/The Trails, and South Downtown.

West Harrison is an isolated community, lodged between a tall hill bordered by a lake, Interstate 287, a tall relatively steep hill, and a cliff at the northern edge. Because of this, there is a general lack of street entrances. There is really only one road into it, although there are a few other "back" ways into it. The road is called Lake Street, flanked on one side by Silver Lake Park, bordering the lake, and by a small business district on the other side of the street. West Harrison contains the Passidomo Veterans Memorial Park and Pool and the Leo Mintzer Center. West Harrison also contains the site of the Battle of White Plains from the Revolutionary War.

Purchase is a more secluded area of Harrison, with winding roads and deep woods. The houses are larger, in often cases whole swaths of land developed in the late twentieth century, and early 2000s, comparably younger in age to the rest of the town.

Downtown is split into the four sections mentioned above, and is flanked by Interstate 95, the Hutchinson River Parkway, and the Metro-North Railroad. The manmade lines create isolation to areas, with few areas to cross each. Harrison's only middle school, Louis M. Klein Middle School, and only High School, Harrison High School, are located in the "downtown" area. The four areas of downtown, as separated by the boundaries of Interstate 95 and the railroad tracks as well as separated by wealth gaps, are very diverse. Despite its name, "Downtown" is not in any sense a business district, it is much rather a residential enclave, featuring houses of every wealth level.

Harrison is traversed by several of Westchester County's major arteries.

Harrison is served by several other significant roads.

Harrison is served by the New Haven Line of the Metro-North Railroad at the Harrison station, near the intersection of NY 127/Harrison Avenue and Halstead Avenue downtown.

Harrison is served by Westchester County Airport, which is partially located in Purchase. 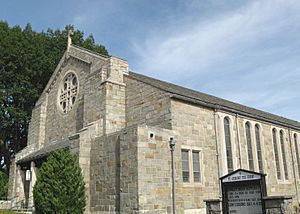 Places of worship in Harrison include: 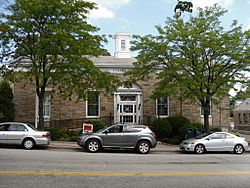 There are several cemeteries in the downtown, including many small family plots dating back to the 17th century and before. Greenwood Union Cemetery is a cemetery shared by the city of Rye. There is also the Small Roman Catholic Cemetery dating back to when Harrison was first discovered in the 17th century. It is located right on the border of Rye and Harrison. This was a domain for Indian burials.

The Westchester Country Club, Willow Ridge Country Club, and Apawamis Golf Club are all located in Harrison. All three of them are next to each other in the southern half ("downtown") portion of the town. A portion of Apawamis, including its entrance is located in Rye, New York.

Harrison contains two post offices; one is located in the downtown section on Halstead Avenue, and the other is in Purchase, facing Purchase Street, near the intersection with Anderson Hill Road.

The Hadden-Margolis House, Stony Hill Cemetery, and United States Post Office are listed on the National Register of Historic Places.

Companies based in Harrison include Transamerica Retirement Solutions, MasterCard, and PepsiCo, on the renowned platinum mile.

The Keio Academy of New York is a private high school located in Purchase. The Windward School

The State University of New York at Purchase and Manhattanville College are located in Purchase. In 2008, Fordham University opened its Westchester campus in West Harrison on 32 landscaped acres with a stream and pond. 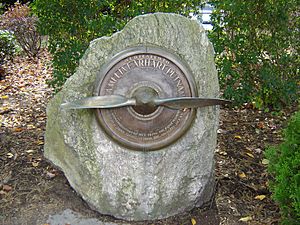 All content from Kiddle encyclopedia articles (including the article images and facts) can be freely used under Attribution-ShareAlike license, unless stated otherwise. Cite this article:
Harrison, New York Facts for Kids. Kiddle Encyclopedia.