Earhart was the first female aviator to fly solo across the Atlantic Ocean. She set many other records, wrote best-selling books about her flying experiences, and was instrumental in the formation of The Ninety-Nines, an organization for female pilots.

Born in Atchison, Kansas, Earhart developed a passion for adventure at a young age, steadily gaining flying experience from her twenties. In 1928, Earhart became the first female passenger to cross the Atlantic by airplane accompanying pilot Wilmer Stultz, for which she achieved celebrity status.

In 1932, piloting a Lockheed Vega 5B, Earhart made a nonstop solo transatlantic flight, becoming the first woman to achieve such a feat. She received the United States Distinguished Flying Cross for this accomplishment.

In 1935, Earhart became a visiting faculty member at Purdue University as an adviser to aeronautical engineering and a career counselor to women students. She was also a member of the National Woman's Party and an early supporter of the Equal Rights Amendment.

During an attempt to make a circumnavigational flight of the globe in 1937 in a Purdue-funded Lockheed Model 10-E Electra, Earhart and navigator Fred Noonan disappeared over the central Pacific Ocean near Howland Island. She was declared dead on January 5, 1939. 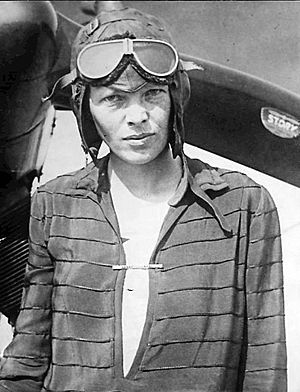 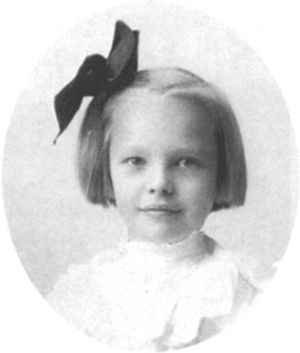 Earhart as a child 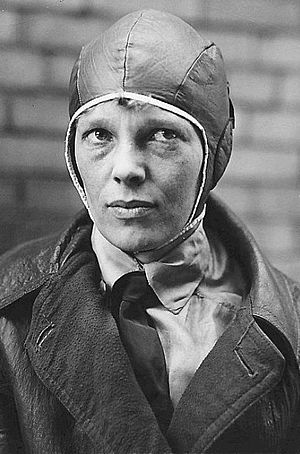 Born in Atchison, Kansas, Amelia Earhart's parents encouraged her from a young age to participate in activities usually left to boys, such as football, baseball, and fishing. Their encouragement, watching numerous air shows in Los Angeles, and paying a pilot a dollar for a 10-minute airplane ride all contributed to her decision to become a pilot and join this mainly male field. After her first ride, she wrote, "By the time I had gotten two or three hundred feet off the ground, I knew I had to fly."

From 1921 to 1922, Earhart was taught to fly by Neta Snook, the first woman to graduate from the Curtis School of Aviation. In October 1922, Earhart received her pilot's license from the Federation Aeronatique Internationale. Soon after, on October 22, 1922, Earhart set a women's altitude record of 14,000 feet (4,200 meters) in a Kinner Canary, an open-cockpit, single-engine biplane.

Charles Lindbergh made his record-setting solo flight across the Atlantic Ocean in 1927. One of the people inspired by his feat was flying enthusiast Amy Guest, who hoped to be the first woman to cross the Atlantic. She purchased a plane but her family stopped the trip.

Earhart went in her place and became the first female to cross the Atlantic Ocean. Leaving Newfoundland, Canada, on June 4, 1928, Earhart joined Wilmer L. Stutz and Louis E. Gordon in their bright red Fokker F.VII named the Friendship on their 2,000-mile (3,219-kilometer) trip to Wales. Earhart had no part in piloting the plane during the 20-hour, 40-minute trip and was, in her words, "just baggage," making her even more eager to cross the Atlantic on her own. 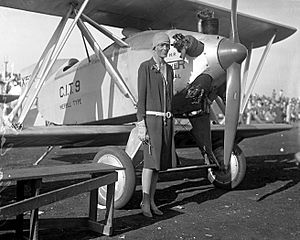 In 1929, Earhart co-founded an organization whose goal it was to advance women's participation and opportunities in aviation. Called the Ninety-Nines, the organization was composed of 99 charter members, representing 99 of the 117 licensed women pilots in the United States at the time. 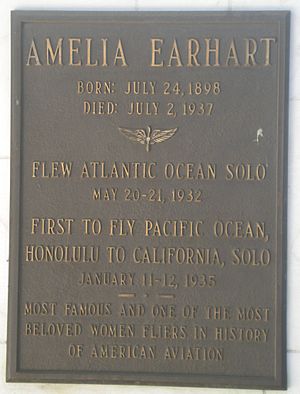 Earhart Tribute at Portal of the Folded Wings

On May 20–21, 1932, Earhart accomplished her goal of flying solo across the Atlantic Ocean. She took off from Newfoundland, Canada, at 7:12 p.m. on May 20, in her Lockheed Vega. Her flight was filled with dangers, from rapidly changing weather to a broken altimeter so she could not tell how high she was flying, to gasoline leaking into the cockpit. At one point her plane dropped almost 3,000 feet (914 meters) and went into a spin (which she managed to pull out of) and flames were shooting out of the exhaust manifold.

President Herbert Hoover awarded her the National Geographic Society Medal on June 21, 1932, for her achievement, and the U.S. Congress awarded her the Distinguished Flying Cross, the first woman to receive such an honor. Earhart's accomplishment meant a great deal to the entire world, but especially to women, for it demonstrated that women could set their own course in aviation and other fields. 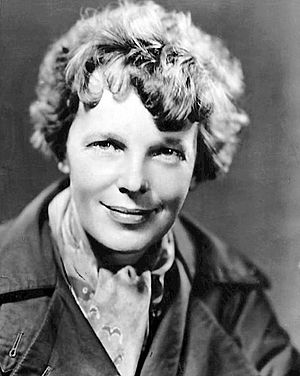 Her next major achievement was to set the women's nonstop transcontinental speed record. On August 24–25, 1932, she flew from Los Angeles, California, to Newark, New Jersey, in a record 19 hours, 5 minutes, flying a Lockheed Vega, also becoming the first woman to fly solo coast-to-coast. The next July she set a new transcontinental speed record, making the same flight in a record 17 hours, 7 minutes.

In January 1935, Earhart became the first woman to make a solo long-distance flight over the Pacific Ocean, flying from Honolulu, Hawaii, to San Francisco, California. This complicated flight in her second Lockheed Vega occurred in adverse weather conditions and demonstrated Earhart's courage as well as her stubbornness.

She followed that flight with two more first solo flights—one on April 19–20 from Los Angeles, California, to Mexico City, in 13 hours, 23 minutes and the second on May 8, 1935, from Mexico City to Newark, New Jersey, in 14 hours, 19 minutes.

Flight around the world 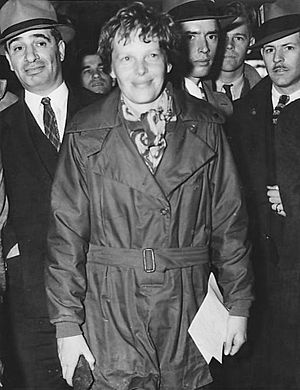 Earhart wanted to be the first of either gender to fly around the world at its widest, close to the equator. She acquired the most advanced long-range, non-military aircraft available—a Lockheed Model 10E Electra. The all-metal, two-engine plane had been reconfigured with extra fuel tanks replacing the passenger seats, allowing the plane to travel farther between re-fueling.

Her first attempt at the world flight began on March 17, 1937, in Oakland, California, but ended abruptly with a runway crash in Honolulu, Hawaii, after a tire blew and a shock absorber on the landing gear failed. Earhart decided to repair the damaged plane and try again.

The flight began again on May 20, 1937, this time heading from Oakland to Miami, Florida. But it was it had mechanical problems along the way that resulted in further delays. Eventually she and Fred Noonan, her navigator, reached Miami and made final adjustments to the plane's engines and instruments. Finally, Earhart and Noonan were ready to depart.

Amelia Earhart's Lockheed Electra 10E. During its modification, the aircraft had most of the cabin windows blanked out and had specially fitted fuselage fuel tanks

What turned out to be the final flight of Earhart's career, and, ultimately, her life, began on June 1, 1937. Earhart and Noonan left for their round-the-world flight from Miami, Florida, in her twin-engine, red-winged Electra. From Miami, they flew to San Juan, Puerto Rico.

Right before taking off on this leg of the flight, Earhart was quoted as saying, "I have a feeling there is just about one more good flight left in my system and I hope this trip is it. Anyway, when I have finished this job, I mean to give up long-distance 'stunt' flying." 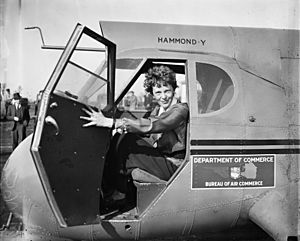 As Earhart's journey continued, news of her flight made the front page of newspapers around the world. She sent reports of the land, cultures, and people she encountered. On June 30, 1937, Earhart and Noonan arrived in Lae, New Guinea. They had traveled 22,000 miles (35,406 kilometers) and had 7,000 miles (11,265 kilometers) left to go.

Their next destination, and the most dangerous stop of the trip, was Howland Island, a tiny island in the Pacific Ocean, 2,556 miles (4,113 kilometers) away. Before Earhart took off from Lae on July 1, there was confusion about which radio frequencies were to be used, which remained unresolved before she took off. 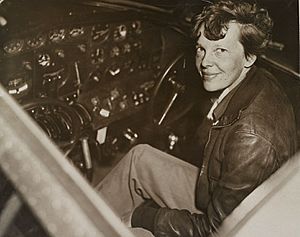 As the scheduled time neared for Earhart to approach the island, several transmissions were received from her, demanding to know the weather. A new weather report describing heavy clouds and rain northwest of Howland had been issued, and Earhart had apparently run into the storm. Earhart transmitted several more times but never reached her destination, disappearing somewhere off the coast of the island.

A large search party was quickly organized, but no remains of the crew and the plane were ever found.

There are many theories surrounding the controversial disappearance of Earhart's plane on July 2, 1937. Most researchers believe that Earhart and Noonan got lost, ran out of gas, and went down somewhere in the Pacific Ocean. However, two other theories has grown in the years since, one involving capture and execution as spies by the Japanese, and the other dying of exposure after landing on a deserted island.

Although only 39 when she disappeared, Earhart accomplished a great deal and is considered a true hero of the 20th century, especially for women. She demonstrated courage, integrity, and an independent spirit.

She used her fame to advance the cause of women and showed that a determined woman could achieve anything. Her efforts led a generation of women to seek new horizons and new roles for themselves.

Amelia Earhart was an accomplished writer who served as aviation editor for Cosmopolitan magazine from 1928 to 1930. She authored numerous magazine articles and essays, and published two books based upon her experiences as a flyer during her lifetime:

A third book credited to Earhart, Last Flight, was published following her disappearance and featured journal entries she made in the weeks prior to her final departure from New Guinea. 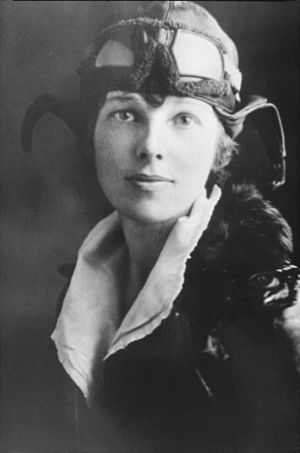 How did Amelia Earhart die?
Since they never found her they couldn't say for certain, but two years after she went missing they said that her plane had probably crashed in the Pacific Ocean and she had drowned.

How old would Amelia Earhart be today?
Amelia would be 123 years old today.

Was Amelia Earhart's plane ever found?
No trace of her plane has ever been found. In 2019, the explorer who found the Titanic, Robert Ballard, went searching for the plane and he found no hint of it.

Where did Amelia Earhart disappear?
Amelia and her navigator disappeared somewhere over the Pacific Ocean.

What island did Amelia Earhart crash on?
Howland Island was the island in the central Pacific Ocean where they thought Amelia may have crashed. She was trying to locate the island when she disappeared.

Did Amelia Earhart have kids?
Amelia didn't have any children of her own but did have two step-children.

What were Amelia's last words?
Her last message was Amelia giving compass headings to the Coast Guard cutter Itasca that was near Howland Island that was helping her during her flight. "We are on the line 157 337. We will repeat this message. We will repeat this on 6210 kilocycles. Wait..."

Did Amelia Earhart survive the crash?
Amelia and her navigator, Fred Noonan may have survived a crash landing.

All content from Kiddle encyclopedia articles (including the article images and facts) can be freely used under Attribution-ShareAlike license, unless stated otherwise. Cite this article:
Amelia Earhart Facts for Kids. Kiddle Encyclopedia.