Rye is a city in Westchester County, New York, United States. It is separate from the town of Rye, which has more land area than the city. Rye city, formerly the village of Rye, was part of the town until it received its charter as a city in 1942. The population was 15,720 at the 2010 census. Rye is the youngest city in New York State. No other city has been chartered anywhere in New York State since 1942.

Playland, a historic amusement park designated a National Historic Landmark in 1987, is also located in Rye. Playland features one of the oldest wooden roller coasters in the Northeast, the Dragon Coaster.

Of note are two 200+ year old milestones labeled 24 and 25 on the Boston Post Road, America's oldest thoroughfare. The concept of mile markers to measure the distance from New York City was originated in 1763 by Benjamin Franklin during his term as Postmaster General. These sandstone markers likely date from 1802 when the Westchester Turnpike was configured. Rye is also home to a rare 1938 WPA mural by realist Guy Pene du Bois which is located within the city's Post Office lobby and titled "John Jay at His Home."

Rye was at one time a part of Fairfield County, Conn., which was a belonging of the Sachem Ponus, of the Ponus Wekuwuhm, Canaan Parish, and which was probably named for that chieftain, "Peningoe Neck". The oldest house in the city, the Timothy Knapp House, is owned by the Rye Historical Society and dates in its original version to around 1667. It was added to the National Register of Historic Places in 1982. The Historical Society also owns a former inn/tavern built in 1730, known today as the Square House, which it operates as a museum. George Washington stayed at the inn on two separate occasions, remarking favorably on his experience in his diaries. 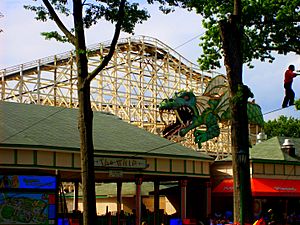 The wooden Dragon Coaster is a signature component of Playland Amusement Park, a National Historic Landmark that dates back to 1927.

Rye is also where American Founding Father John Jay grew up and where he is buried. The Jay Estate at 210 Boston Post Road is now the home of the not-for-profit organization the Jay Heritage Center. The Center's mission is to restore and preserve the entire 23 acre property - buildings and landscape - together with the 1838 Peter Augustus Jay House, which occupies the original site of the Jay family farm, "The Locusts." Restoration of the Jay mansion overlooking Long Island Sound is an official project of the Save America's Treasures Program. With its ornate composite Egyptian and Corinthian columns, and pedimented facade, the house is a textbook example of American Greek Revival architecture popularized before the Civil War and is noted for its many design elements influenced by Minard Lafever. The Jay Mansion is the oldest National Historic Landmark (NHL) structure in New York State with a geothermal heating and cooling system and the first in Westchester County to have such an energy efficient system. The Jay Heritage Center was recently designated a member site of the Hudson River Valley National Heritage Area. It is also listed on Westchester County's African American Heritage Trail. John Jay was well known for advocating emancipation, serving as President of the New York Manumission Society and establishing the first African Free School.

Rye is known for its amusement attraction, Rye Playland. This 279 acre theme park is owned and operated by Westchester County and includes rides, games, an indoor skating rink or Ice Casino, beach, a boardwalk and concession stands. It is one of only two amusement parks in the country with National Historic Landmark status, the other one being Kennywood in Pennsylvania. It has been a popular destination since it first opened in 1928. Its wooden roller coaster, the Dragon Coaster, built in 1929, is one of the last roller coaster rides built by engineer Frederick Church that is still operating. The Derby Racer, also built by Church, is one of only 3 rides of its kind remaining in the world. Glenn Close and Ellen Latzen ride the roller coaster in the 1980s thriller, Fatal Attraction. Playland is also the setting for several key scenes in the comedy film Big, starring Tom Hanks.

All content from Kiddle encyclopedia articles (including the article images and facts) can be freely used under Attribution-ShareAlike license, unless stated otherwise. Cite this article:
Rye, New York Facts for Kids. Kiddle Encyclopedia.