Kennywood is an amusement park located in West Mifflin, Pennsylvania just southeast of Pittsburgh. The park first opened on May 30, 1899, as a trolley park attraction at the end of the Mellon family's Monongahela Street Railway. It was purchased in 1906 by F. W. Henninger and Andrew McSwigan, both of whom later formed the family-owned Kennywood Entertainment Company. The company later sold Kennywood, along with four other parks, in 2007 to Parques Reunidos, an international entertainment operator based in Spain. The amusement park features various structures and rides dating back to the early 1900s. Along with Rye Playland Park, it is one of only two amusement parks designated as a National Historic Landmark. Kennywood is also one of only thirteen trolley parks in the United States that remains in operation.

Kennywood is approximately 8 miles (13 km) from Downtown Pittsburgh, in West Mifflin, Pennsylvania. The park is along Pennsylvania Route 837 (Green Belt), known as Kennywood Boulevard as it passes through the borough. The closest Interstate connection is Exit 77 (Edgewood/Swissvale) on Interstate 376. The Mon–Fayette Expressway will eventually go past Kennywood, which will prompt an expansion of the park when it is built.

Historically, the park is on the location of the July 9, 1755 Battle of the Monongahela, where British general Edward Braddock was mortally wounded, ending his expedition to capture the French Fort Duquesne during the French and Indian War. George Washington was a colonel to Braddock, and fought at the battle before they retreated. Later the land on the bluff above the Monongahela River was part of a farm owned by Anthony Kenny. Starting around the time of the American Civil War, the site was a popular picnic grove for locals, known as "Kenny's Grove". 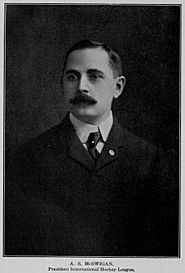 A tree-filled portion of a farm owned by Anthony Kenny, known as "Kenny's Grove" overlooking the Monongahela River near Pittsburgh, Pennsylvania was a popular picnic spot for local residents since the American Civil War. In 1898, the Monongahela Street Railways Company, partially owned by prominent banker Andrew Mellon, seeking to increase fare profits on the weekends, leased the land from the Kenny family in order to create a trolley park at the end of their line. The company's chief engineer, George S. Davidson, designed the original layout of the park and served as its first manager. A carousel, casino hall, and dance pavilion were added in 1899. A bandstand was constructed in 1900, while the Old Mill was constructed in 1901, and the park's first roller coaster, the Figure Eight Toboggan, was added in 1902. After less than a decade, the trolley company no longer wanted to manage the park. The standing manager, Andrew S. McSwigan, along with partners Frederick W. Henninger and A. F. Meghan, leased and operated the park as Kennywood Park Limited beginning in 1906.

From its origin as a working-class picnic entertainment destination, the park grew in the first half of the twentieth century into a popular attraction that combined thrill rides with recreation venues such as swimming pools and dance halls.

Kennywood ceased to be served by streetcar when Mon Street Railways successor Pittsburgh Railways Company converted the route serving it, the lengthy #68 Duquesne-McKeesport line, to bus on September 15, 1958.

Today, the park features a nostalgic atmosphere and is supported by a loyal fan base. As of December 2007, Kennywood Entertainment also ran Sandcastle Waterpark [1], which opened in 1989; Idlewild Park [2] near Ligonier; Story Land [3], a children's theme park in Glen, New Hampshire; and Lake Compounce [4], New England's family theme park in Bristol, Connecticut, which is the oldest continuously operating amusement park in North America.

On December 12, 2007, Kennywood Entertainment announced that it would be selling Kennywood Park, along with Sandcastle Waterpark and four other amusement parks in the Northeastern United States, to Parques Reunidos, a company based in Madrid, Spain.

Kennywood now uses the slogans “Welcome to the Family”, "America's Finest Traditional Amusement Park", and "Make a New Memory", although from the 1960s through the early 1990s the slogan was "The Roller Coaster Capital of the World" (a title which is now being used by Cedar Point). The property features three old wooden roller coasters still in working order, along with three newer steel coasters, the Phantom's Revenge (2001) and the Sky Rocket (2010), The Steel Curtain (2019), and one indoor coaster, the Exterminator (1999).

Through the years, the phrase "Kennywood's open!" has gained an alternate meaning and is often used in the Pittsburgh region to alert another person that the zipper on his/her pants is open.

For the past several years, Kennywood has been rated the "Favorite 'Dark Attraction Park'" by the Darkride And Funhouse Enthusiasts, or DAFE.

It ranked second to Cedar Point in the category of "Favorite Park" in Theme Park Magazine's 2004 Reader's Choice Awards.

The park was designated a U.S. National Historic Landmark in 1987. 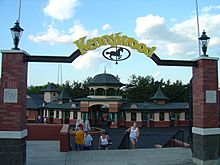 Kennywood has made use of the hilly Pittsburgh terrain to create coasters that wouldn't be feasible in some amusement parks. The Thunderbolt and the Jack Rabbit, both wooden coasters, place the lift chain in the middle of the ride, not at the beginning. In both cases, the car leaves the station and drops into a valley for its first hill. Phantom's Revenge uses the same valley as the Thunderbolt, where the Phantom's second drop passes through the supports of the Thunderbolt's first drop, making the second drop the longest and steepest drop in the ride.

Phantom Fright Nights is a Halloween event held at Kennywood on Friday and Saturday nights during the month of October. The park traditionally opened at seven in the evening and closes at one in the morning. In 2015 the hours were changed to six until midnight. The event began in 2002, though the concept of theming an amusement park for Halloween is not new. "Phantom Fright Nights" received third place in the Golden Ticket Awards for best Halloween event in 2007.

Labor Day traditionally marked the end of the season and the park would shut down until the spring. In 2002, Kennywood decided to break the long-standing tradition and turn almost half of the park into a giant Halloween extravaganza. The park's initial trial of Phantom Fright Nights in 2002 consisted of four traditional haunted houses, with only a few rides and roller coasters in operation. Despite the relatively limited scope of the opening year, the experiment proved to be a success, and new areas of the park and rides are opened for the festivities every year. In 2004 Kennywood debuted Gory Park, a haunted zone in Lost Kennywood. The following year, 2005, the park managed to have 3/4 of the rides and attractions operable due to high demand and record-breaking crowds. The park has reported attendance greater for one Fright Night than they have on a good normal operating day.

In the spirit of Halloween season, the park itself is given a complete make-over, with costumed actors roaming the paths, spooky music filling the air, and fog blanketing the park and every light bulb in the park is changed to a different color—even the restroom windows are covered in colored films. The merry-go-round horse normally found in the fountain by the entrance is replaced by a giant Phantom-like figure with glowing red eyes hovering over bubbling red blood (dyed water). In some places sheets are hung up and classic horror movies are played, such as the original "House on Haunted Hill". Several areas of the park, including Kiddieland and Lost Kennywood, are turned into open-air haunted attractions. Other buildings, such as the Penny Arcade and the Parkside Terrace Cafe, are converted into more traditional haunted houses. Some rides are given entirely new lighting and fog effects including strobes and blacklights, or in the Exterminator's case, an absolute absence of light. In the case of the Carousel and Müsik-Express, Halloween-themed music is all that is played. Even the entrance tunnel is affected; a great amount of fog is pumped into the passageway and chainsaw-wielding characters stalk unsuspecting guests as they enter. These ghouls are also found throughout the park when least expected.

Kennywood discourages children under the age of thirteen from attending the park during Phantom Fright Nights as the atmosphere may be too intense for some younger children, but letting children attend is solely at the discretion of parents or guardians. Many children go to Fright Nights anyway, even with the suggestion since Kennywood will admit attendees of any age.

Kennywood in the media 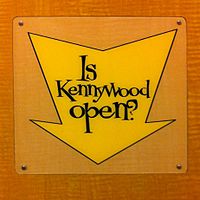 A sign reading "Is Kennywood Open?" in a restroom at Eat'n Park near Pittsburgh Mills.

Kennywood's world-renowned reputation and nationwide popularity has led to its mention and appearance in many forms of media, including TV shows, movies, books, records, and has even warranted a reason to film a documentary about the park's history.

Kennywood served as the main inspiration for Jennifer Crusie and Bob Mayer's novel Wild Ride. The writers acknowledged the park by stating "Kennywood for giving us a place to start thinking about Dreamland"

All content from Kiddle encyclopedia articles (including the article images and facts) can be freely used under Attribution-ShareAlike license, unless stated otherwise. Cite this article:
Kennywood Facts for Kids. Kiddle Encyclopedia.