Downtown Pittsburgh, colloquially referred to as the Golden Triangle, and officially the Central Business District, is the urban downtown center of Pittsburgh. It is located at the confluence of the Allegheny River and the Monongahela River whose joining forms the Ohio River. The "triangle" is bounded by the two rivers. The area features offices for major corporations such as PNC Bank, U.S. Steel, PPG, Bank of New York Mellon, Heinz, Federated Investors and Alcoa. It is where the fortunes of such industrial barons as Andrew Carnegie, Henry Clay Frick, Henry J. Heinz, Andrew Mellon and George Westinghouse were made. It contains the site where the French fort, Fort Duquesne, once stood.

The Central Business District is bounded by the Monongahela River to the south, the Allegheny River to the north, and I-579 (Crosstown Boulevard) to the east. An expanded definition of Downtown may include the adjacent neighborhoods of Uptown/The Bluff, the Strip District, the North Shore, and the South Shore. 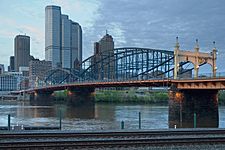 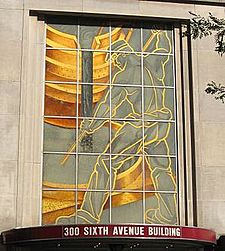 Downtown is served by the Port Authority's light rail subway system (known locally as the "T"), an extensive bus network, and two inclines (Duquesne Incline and Monongahela Incline). The Downtown portion of the subway has the following stations:

Downtown is also home to an Amtrak train station connecting Pittsburgh with New York City, Philadelphia, and Washington, D.C. to the east and Cleveland and Chicago to the west. Greyhound's Pittsburgh bus terminal is located across Liberty Avenue from the Amtrak Station, in the Grant Street Transportation Center building.

Three major entrances to the city are via tunnels: the Fort Pitt Tunnel and Squirrel Hill Tunnel on I-376 and the Liberty Tunnels. The New York Times once called Pittsburgh "the only city with an entrance," specifically referring to the view of Downtown that explodes upon drivers immediately upon exiting the Fort Pitt Tunnel. Also traveling I-279 south and I-376, the city "explodes into view" when coming around a turn in the highway. 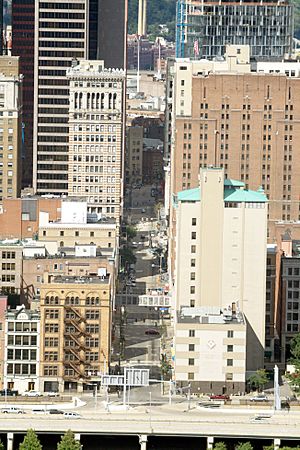 Downtown surface streets are based on two distinct grid systems that parallel the Allegheny and Monongahela rivers. These two grids intersect along Liberty Avenue, creating many unusual street intersections. Furthermore, the Allegheny grid contains numbered streets, while the Monongahela grid contains numbered avenues. And, in fact, there are cases where these numbered roadways intersect, creating some confusion (i.e. the intersection of Liberty Avenue and 7th Street/6th Avenue). This unusual grid pattern leads to Pittsburghers giving directions in the terms of landmarks, rather than turn-by-turn directions. 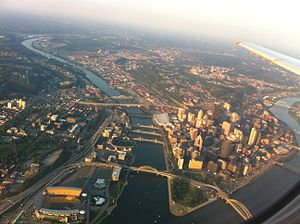 At least seventeen of Pittsburgh's bridges are visible in this aerial photo.

Pittsburgh is nicknamed "The City of Bridges". In Downtown, there are 10 bridges (listed below) connecting to points north and south. The expanded definition of Downtown (including the aforementioned surrounding neighborhoods) includes 18 bridges. City-wide there are 446 bridges. In Allegheny County the number exceeds 2,200. 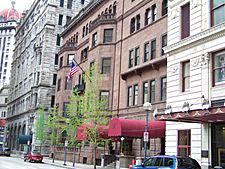 Downtown contains a wealth of historic, cultural, and entertainment sites. While most people still consider the entire Downtown as one neighborhood, there are several significant subdistricts within the Golden Triangle. 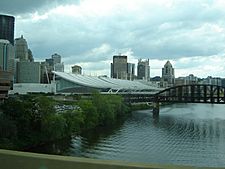 View of the sweeping roofline of the David L. Lawrence Convention Center on the Allegheny River 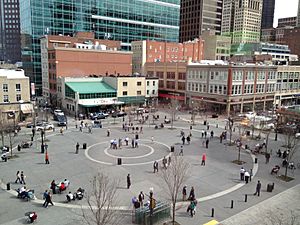 Downtown is home to numerous parks, large and small:

Downtown has several condos, including Gateway Towers and Chatham Place dating to the 1960s [1] and more modern structures as well. There are over 5,000 apartment and condo units in Greater Downtown Pittsburgh. 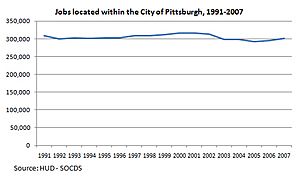 Downtown Pittsburgh retains substantial economic influence, ranking at 25th in the nation for jobs within the urban core and 6th in job density.

University of Pittsburgh economist Christopher Briem notes that the level of employment in the city has remained largely constant for the past 50 years: "[the] time series of jobs located in the City proper are about as stable as any economic metric in the region, or in any other Northeastern US urban core, over many decades. In 1958, [there were] 294,000 jobs located in the city proper…Those numbers are virtually identical today which tells me there is a certain limit to how many jobs can efficiently be located in what are some relatively (very) constrained areas." These numbers reflect employment in the city as a whole, not just the central business district; but the central business district has the highest density of employment of any Pittsburgh neighborhood.

Pittsburgh has long been a headquarters city, with numerous national and global corporations calling the Golden Triangle home. Currently, Downtown is still home to a large number of Fortune 500 companies (8 in the metro area, 6 of which are in the city in 2009, which ranks Pittsburgh high nationally in Fortune 500 headquarters):

– headquartered in the PPG Place

– headquartered in One PNC Plaza

– headquartered at the US Steel Tower

Downtown is also home to GNC, Dollar Bank, Equitable Resources, Duquesne Light, Federated Investors and Highmark as well as the regional headquarters for Citizens Bank, Ariba, and Dominion Resources. Regional healthcare giant UPMC has its corporate headquarters in the US Steel Tower.

While Pittsburgh's Oakland neighborhood is known as the educational center of the city, Downtown is home to several higher education institutions as well as a branch of the city's Carnegie Library system and a Pittsburgh Public Schools 6–12 school:

All content from Kiddle encyclopedia articles (including the article images and facts) can be freely used under Attribution-ShareAlike license, unless stated otherwise. Cite this article:
Downtown Pittsburgh Facts for Kids. Kiddle Encyclopedia.