Andy Warhol Bridge, also known as the Seventh Street Bridge, spans the Allegheny River in Downtown Pittsburgh, Pennsylvania, and is the only bridge in the United States named for a visual artist. It was opened at a cost of $1.5 million on June 17, 1926, in a ceremony attended by 2,000.

Named for the artist Andy Warhol, a Pittsburgh native, it is one of three parallel bridges called The Three Sisters, the others being the Roberto Clemente Bridge and the Rachel Carson Bridge. The Three Sisters are self-anchored suspension bridges and are historically significant because they are the only trio of nearly identical bridges – as well as the first self-anchored suspension spans — built in the United States.

The bridge was renamed for Warhol on March 18, 2005, as part of the tenth anniversary celebration for the Andy Warhol Museum. The museum is nearby at 117 Sandusky Street, a street which leads to the bridge from the north side of the river on Pittsburgh's North Shore.

On August 11, 2013, the Andy Warhol Bridge was covered with 580 knitted and crocheted panels in a yarn bombing project known as Knit the Bridge that lasted for four weeks. 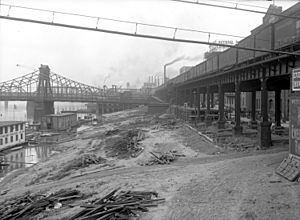 This is the third Bridge on the site, the first being demolished in early 1884, its replacement, began construction in 1884, and was open to traffic by 1887.

All content from Kiddle encyclopedia articles (including the article images and facts) can be freely used under Attribution-ShareAlike license, unless stated otherwise. Cite this article:
Andy Warhol Bridge Facts for Kids. Kiddle Encyclopedia.