BNY Mellon Center is a 55-story skyscraper located at 500 Grant Street in downtown Pittsburgh, Pennsylvania. Standing 725 ft (221 m) tall, it is the second-tallest building in the city. Announced on March 27, 1980, the tower was completed in June 1984. It was initially planned to be the world headquarters of the Dravo Corporation (now Carmeuse Corporation) by its majority owner at the time and current neighbor U.S. Steel until Dravo was purchased in 1983. Upon opening, the building was named One Mellon Center after Mellon Financial Corporation, which used the tower as the company's global headquarters. In 2007, the company merged with Bank of New York to form The Bank of New York Mellon; the resulting corporation continues to use the building as one of its major offices. In 2008, the building was renamed to its current moniker as part of a branding initiative by The Bank of New York Mellon.

Prominent features of the building include its eight-sided design, mansard roof and rooftop heliport. BNY Mellon Center is the 195th-tallest skyscraper in the world. It is the building with the highest taxable property value in Allegheny County, surpassing the larger U.S. Steel Tower. On clear days, it is possible to spot the building from as far as 50 miles away, usually from the top of Chestnut Ridge. 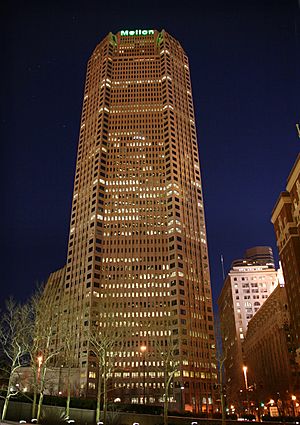 The 500 block of Grant Street was for decades the site of the Carlton Hotel, Plaza Building and the "Interlude Lounge" across the street from the Allegheny County Courthouse on the current complex's southern extreme. In the early 1980s, U.S. Steel, which has its global headquarters one block north at the U.S. Steel Tower bought the land Mellon Center was to be built on and planned a 54-floor skyscraper replacing the Carlton Hotel and Plaza Buildings. The naming rights originally went to the Pittsburgh manufacturing firm Dravo Corporation and was to serve as their leased headquarters space (while still owned by U.S. Steel). After the recession of the late 1970s and early 1980s combined with the rapid deindustrialization of the 1980s, Dravo was bought out by a foreign conglomerate and its regional facilities were shuttered. U.S. Steel, having diversified into oil and other industries, sold the almost completed skyscraper on February 16, 1983 to a Connecticut Limited Partnership, the 500 Grant Street Partners, for what was then the second-largest real estate purchase in Western Pennsylvania history.

In March 2010, installation began on a new rooftop sign that would replace the old Mellon signage with the company's new triangular logo and the new brand name "BNY Mellon". The effort lasted until the end of 2010.

All content from Kiddle encyclopedia articles (including the article images and facts) can be freely used under Attribution-ShareAlike license, unless stated otherwise. Cite this article:
BNY Mellon Center (Pittsburgh) Facts for Kids. Kiddle Encyclopedia.