PPG Place is a complex in downtown Pittsburgh, Pennsylvania, consisting of six buildings within three city blocks and five and a half acres. PPG Place was designed by architects Philip Johnson and John Burgee.

Named for its anchor tenant, PPG Industries, who initiated the project for its headquarters, the buildings are all of matching glass design consisting of 19,750 pieces of glass. The complex centers on One PPG Place, a 40-story office building. Groundbreaking ceremonies occurred on January 28, 1981. The complex buildings opened between 1983 and 1984, and a dedication ceremony took place on April 11, 1984. Total cost of construction was $200 million ($561.6 million today). The buildings were sold by The Hillman Company to Highwoods Properties in 2011. 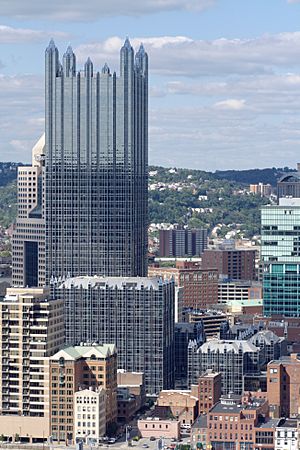 The complex as seen from Mount Washington.

The project was started by PPG Industries (formerly Pittsburgh Plate Glass Company) to serve as the company's headquarters, after being based in Downtown Pittsburgh since 1895. The company contracted the project to architect Philip Johnson and his partner John Burgee. Designed in the neogothic style but with modern innovations, the complex had many inspirations, including London's Victoria Tower, and H.H. Richardson's Allegheny County Courthouse and Charles Klauder's Cathedral of Learning in Pittsburgh. Before the building was constructed, an 8-foot-tall, 600 pound model was pieced together in Tarentum, Pennsylvania by Renato "Reno" Chieruzzi in the basement of his home. Glass for the model was cut at the Ford City PPG works.

During demolition and preparation of the site, a team of University of Pittsburgh anthropologists collected over 10,000 artifacts dating to the 18th century in what was the Kings Garden and Kings Orchard about 1,000 feet from the gate to Fort Pitt, as well as many medical instruments denoting facilities in the area. The team also discovered several stone-lined wells and cisterns dating to around 1800 that were subsequently filled with refuse and artifacts in the early 1800s as the early settlement expanded and the wells went dry. The site was the home of the four-story Guskey's Department Store for much of the 20th century.

The buildings are recognized by their 231 glass spires, with the largest one 82 feet (25 m) tall. Also notable are the surfaces of reflective insulating glass, that served to advertise the project's founder. The buildings contain over one million square feet of PPG's Solarban 550 Twindow - 19,750 pieces. The primary building, One PPG Place, is a 40-story tower, with PPG Industries occupying half of the space. The complex also contains a 14-story building, and four 6-story structures. PPG Industries also uses space in one of the other buildings. The lobby of One PPG is a 50-foot (15 m)-high entrance that features red glass. The building has 21 elevators, each with walls constructed of clear glass panels enclosing fractured glass. In total, the complex cost $200 million.

The design of the building not only made it distinct, but created high energy-efficiency. Heat in the summer is reflected away from the building by the glass, while in winter infrared heat is reflected and contained within the building. The surface walls feature a barrier construction that effectively separates the interior walls from the exterior. The building also collects heat from computer equipment and recycles it throughout the structure.

Construction of the building highlighted Pittsburgh's "Renaissance II period", which saw the Pittsburgh economy falter as a result of steel mill closures, while Pittsburgh Plate Glass remained a Fortune 500 company. 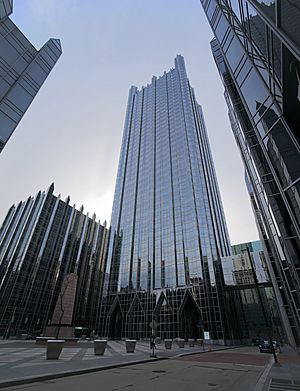 PPG Place sits on six city blocks (5 1⁄2 acres, 22,000 m2) bound by Forbes Avenue and the Boulevard of the Allies on its north and south sides, and Stanwix Street and Wood Street to its east and west. The complex consists of six buildings, which surround an open-air plaza:

One PPG Place includes the Wintergarden, an 8,000 square feet (740 m2) event space with vaulted glass ceilings. While the Wintergarden is part of One PPG Place, it does not sit within the 40-story tower portion of the building. Instead, it is attached to the side of the tower, facing Stanwix Street. 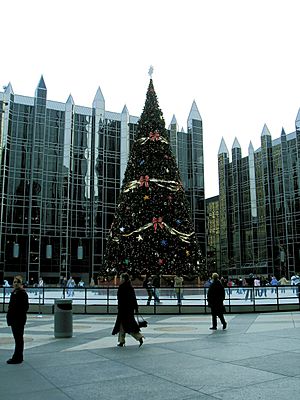 The Rink at PPG Place

The one-acre (4,000 m2) PPG Place Plaza sits between Third Avenue and Fourth Avenue. The plaza features a fountain with 140 water jets and uses 280 underground lights. Opened in 2003, it was designed by WET and SWA Group landscape architecture and urban design. At the center of the fountain is a pink granite obelisk.

All content from Kiddle encyclopedia articles (including the article images and facts) can be freely used under Attribution-ShareAlike license, unless stated otherwise. Cite this article:
PPG Place Facts for Kids. Kiddle Encyclopedia.