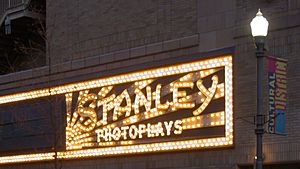 Animated sign from the old Stanley Theater on the Benedum Center

The Stanley Theatre, built at a cost of $3 million, opened as a deluxe movie palace February 27, 1928, with seating for 3,800 people (it now seats 2,885). It was designed by the architectural firm Hoffman−Henon who were best known for their design of 35 theaters in the Philadelphia area. The Stanley Theatre was the largest movie theater in Western Pennsylvania. Operated by the Stanley Warner Theatres circuit division of Warner Bros., it was Pittsburgh's main first run house for all Warner Bros. film releases.

In 1974 War and King Crimson played at the Stanley.

On April 29, 1974, the King Biscuit Flower Hour recorded a show at the Stanley by Robin Trower for a later broadcast.

In 1976, the Stanley was purchased and renovated by the Cinemette Corporation to be operated as a movie theater. In 1977, DiCesare Engler Productions bought the theater.

The Grateful Dead performed four shows at the venue, and reggae musician Bob Marley performed his last live concert there in 1980, before his death in 1981. The only known photographs from the show were featured in Kevin Macdonald's documentary film Marley.

Prince kicked off his Controversy Tour in 1981 at the Stanley. The rock band Kansas chose the Benedum Center to host its 40th Anniversary Fan Appreciation Concert on August 17, 2013, which all the original members were to attend.

The Stanley Theater was named "Number One Auditorium in the U.S." by Billboard several times during the DiCesare-Engler years. 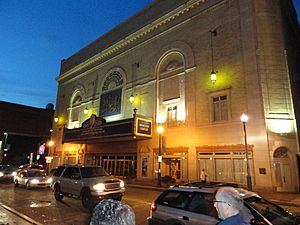 Facade of the Benedum Center

On September 25, 1987, after a $43 million restoration was completed, the Stanley reopened as the Benedum Center for the Performing Arts. In converting the former movie palace into a full performing arts center, a new building including an extension to the stage and support facilities was built at the rear of the theater. The interior was largely preserved and restored to its original design, with the addition of a new acoustical baffle covering the original proscenium. 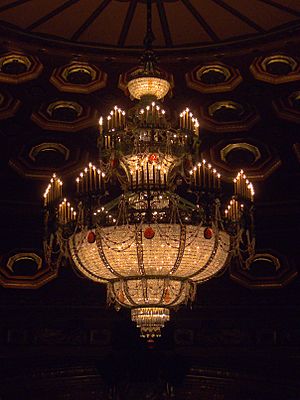 Chandelier in the Benedum Center

The center has hosted several PBS doo-wop television concert specials including Doo Wop 50. The TV game show Wheel of Fortune taped two weeks of shows at the theater for the first two weeks of their 16th season in 1998.

All content from Kiddle encyclopedia articles (including the article images and facts) can be freely used under Attribution-ShareAlike license, unless stated otherwise. Cite this article:
Benedum Center Facts for Kids. Kiddle Encyclopedia.