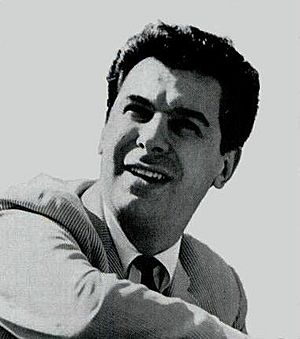 Freddy "Boom Boom" Cannon (born December 4, 1940) is an American singer. He was most famous in the early 1960s. His hit records include "Abigail Beecher", "Tallahassee Lassie", and "Way Down Yonder In New Orleans".

One of Cannon's hits, "Palisades Park", was written by Chuck Barris, who later created The Dating Game and The Gong Show. Cannon also appeared in the movies Just for Fun and Village of the Giants.

All content from Kiddle encyclopedia articles (including the article images and facts) can be freely used under Attribution-ShareAlike license, unless stated otherwise. Cite this article:
Freddy Cannon Facts for Kids. Kiddle Encyclopedia.