Tarzana is a suburban neighborhood in the San Fernando Valley region of Los Angeles, California. Tarzana is on the site of a former ranch owned by author Edgar Rice Burroughs. It is named after Burroughs' fictional jungle hero, Tarzan. 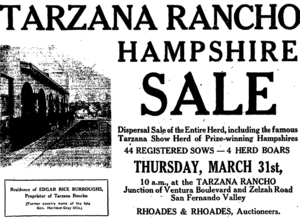 Newspaper advertisement for sale of hogs, 1921

The area now known as Tarzana was occupied in 1797 by Spanish settlers and missionaries who established the San Fernando Mission. Later absorbed by Mexico, the land was ceded to the United States in 1848 by the Treaty of Guadalupe Hidalgo following the Mexican-American War. Under US rule it evolved into a series of large cattle ranches owned by local elites. Investors took over in the 1870s, turning grazing into large-scale wheat farm operation.

The area was purchased in 1909 by the Los Angeles Suburban Homes Company. LA Times founder and publisher General Harrison Gray Otis invested in the company and also personally acquired 550 acres (2.2 km2) in the center of modern-day Tarzana.

In February 1919, Edgar Rice Burroughs, author of the popular Tarzan novels, arrived in California with his family, relocating from Oak Park, Illinois. He and his family had wintered in Southern California twice before, and he found the climate ideal. On March 1, Burroughs purchased Otis’s tract and established Tarzana Ranch. Burroughs subdivided and sold the land for residential development with neighboring small farms following suit. 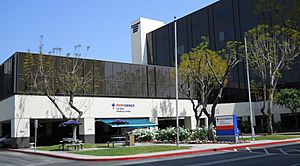 Tarzana, which measures 8.79 square miles, is bounded on the south by Topanga State Park, on the east by Encino, on the north by Reseda and on the west by Woodland Hills.

Victory Boulevard marks the northern edge of the neighborhood, Lindley Avenue the eastern, Corbin Avenue, with a jog to Oakdale Avenue, the western, and Topanga State Park the southern.

The U.S. census counted 35,502 people living in Tarzana in 2000, and Los Angeles estimated the neighborhood's population at 37,778 in 2008. There were 4,038 people per square mile, among the lowest population densities in the city.

According to the 2000 U.S. Census, the racial composition was predominantly white (70.7%), followed by Asian (5%), and black or African American (3.6%). The Los Angeles Times considered the area as "moderately diverse". Thirty-five percent of the population was foreign-born. Iran (24.2%) and Mexico (12.1%) were the most common foreign places of birth.

The percentage of divorced men and women was among the county's highest. Some 9% of the residents were military veterans, considered high for the city of Los Angeles. The percentages of residents aged 50 and older were among the county's highest. The median age, 38, was old when compared to the rest of the city and the county. The median household income in 2008 dollars was considered high, at $73,195.

The Tarzana Recreation Center has a gymnasium that also is used as an auditorium; the building's capacity is 600. The park also has barbecue pits, a lighted baseball diamond, lighted outdoor basketball courts, a children's play area, a community room, an indoor gymnasium without weights, picnic tables, and lighted volleyball courts. 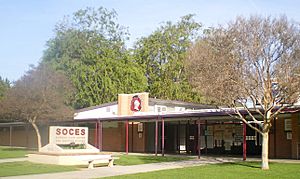 A total of 40.3% of Tarzana residents aged 25 and older have earned a four-year degree. Percentages of those residents with a bachelor's degree or with a master's degree are also high for the county.

Schools within Tarzana are: 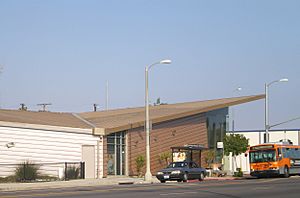 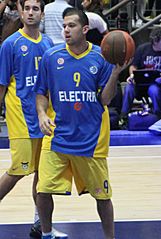 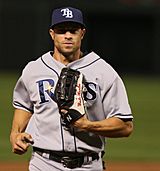 All content from Kiddle encyclopedia articles (including the article images and facts) can be freely used under Attribution-ShareAlike license, unless stated otherwise. Cite this article:
Tarzana, Los Angeles Facts for Kids. Kiddle Encyclopedia.