The 2000 U.S. census counted 24,328 residents in the 3.13-square-mile Lake Balboa neighborhood—or 7,754 people per square mile, about an average population density for the city. In 2008, the city estimated that the population had increased to 26,195. In 2000 the median age for residents was 35, considered average for city and county neighborhoods, but the percentage of residents aged 35 to 49 was among the county's highest.

On November 2, 2007, the City Council of Los Angeles approved a motion renaming a larger portion of Van Nuys to Lake Balboa. The new boundaries are as follows:

These new boundaries were the compromise plan worked out with Los Angeles City Council members Greig Smith (CD12) and Tony Cardenas (CD6) that kept Van Nuys Airport and the predominantly industrial area north of Saticoy Street east of the airport in Van Nuys.

Lake Balboa is flanked on the north by Northridge, on the east by Van Nuys, on the south by the Sepulveda Basin and on the west by Reseda. Its street and other boundaries are Roscoe Boulevard on the north, Balboa Place, the Van Nuys Airport, Hayvenhurst Avenue and Odessa Avenue on the east, Victory Boulevard on the south and White Oak Avenue on the west. 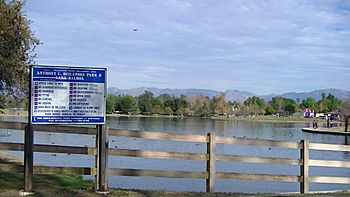 MGA Entertainment, a toy maker, has its headquarters in the Lake Balboa area.

Twenty-five percent of Lake Balboa residents aged 25 and older had earned a four-year degree by 2000, an average figure for both the city and the county.

Schools within the Lake Balboa boundaries are:

All content from Kiddle encyclopedia articles (including the article images and facts) can be freely used under Attribution-ShareAlike license, unless stated otherwise. Cite this article:
Lake Balboa, Los Angeles Facts for Kids. Kiddle Encyclopedia.