Kaley Christine Cuoco (born November 30, 1985) is an American actress and producer. After a series of supporting film and television roles in the late 1990s, she landed her breakthrough role as Bridget Hennessy on the ABC sitcom 8 Simple Rules, on which she starred from 2002 to 2005. Thereafter, Cuoco appeared as Billie Jenkins on the final season of the television series Charmed (2005–2006).

Since 2007, she has starred as Penny on the CBS sitcom The Big Bang Theory, for which she has received Satellite, Critics' Choice, and People's Choice Awards. She received a star on the Hollywood Walk of Fame in 2014. 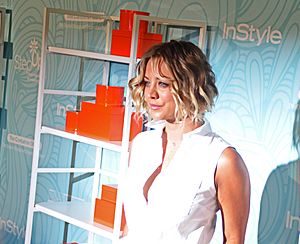 Cuoco was born in Camarillo, California, the elder daughter of Layne Ann (Wingate), a homemaker, and Gary Carmine Cuoco, a realtor. Her father is of Italian descent while her mother is of English and German ancestry. Her sister, Briana, competed on the fifth season of The Voice. As a child, Cuoco was a regionally ranked amateur tennis player, a sport she took up when she was 3 years old. She stopped playing at the age of 16. 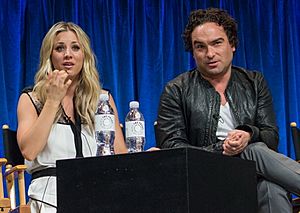 While working on The Big Bang Theory, Cuoco dated co-star Johnny Galecki for roughly two years, until December 2009, while their characters on the show were also dating. They have remained on good terms since ending their relationship.

Cuoco became engaged to professional tennis player Ryan Sweeting in September 2013, after three months of dating. They married on December 31, 2013, in Santa Susana, California. On September 25, 2015, it was announced that she and Sweeting had decided to divorce. The divorce was finalized in May 2016.

All content from Kiddle encyclopedia articles (including the article images and facts) can be freely used under Attribution-ShareAlike license, unless stated otherwise. Cite this article:
Kaley Cuoco Facts for Kids. Kiddle Encyclopedia.