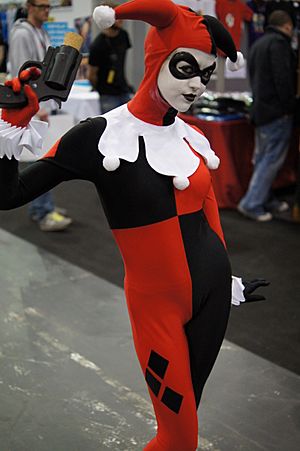 Harley Quinn (Dr. Harleen Frances Quinzel) is a fictional Batman character who appears in American comic books published by DC Comics. She was created by Paul Dini and Bruce Timmis and made her debut in The Batman Adventures #12 (September 1993). She is the girlfriend and partner in crime of The Joker and best friends with Poison Ivy. She dresses up like a jester or harlequin in red, black, and white. Later she dresses in shorts and tops with blonde hair Which is half pink and half blue in pigtails She was voiced by Arleen Sorkin in Batman: The Animated Series. She will be played by Margot Robbie in the 2016 movie Suicide Squad. She has also been in a film birds of prey and also acted again by margot robbie

All content from Kiddle encyclopedia articles (including the article images and facts) can be freely used under Attribution-ShareAlike license, unless stated otherwise. Cite this article:
Harley Quinn Facts for Kids. Kiddle Encyclopedia.