Poison Ivy (Dr. Pamela Lillian Isley) is a fictional supervillainess Batman character who has appeared in American comic books published by DC Comics. Poison Ivy was created by Robert Kanigher and Sheldon Moldoff, and made her debut in Batman #181 (June 1966). She has the physical appearance of a plant with the power to talk to plants into doing evil things. She used to be a doctor who cared for animals until falling into chemicals which gave her the power to talk to plants. Her crime-partner is Harley Quinn. 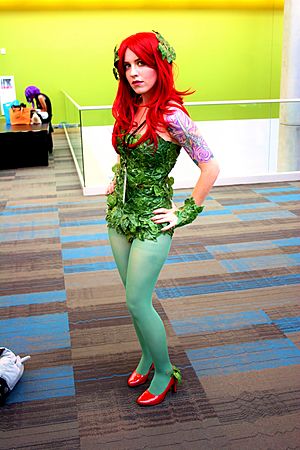 She was played by Uma Thurman in Batman & Robin. She was voiced by Diane Pershing.

All content from Kiddle encyclopedia articles (including the article images and facts) can be freely used under Attribution-ShareAlike license, unless stated otherwise. Cite this article:
Poison Ivy (comics) Facts for Kids. Kiddle Encyclopedia.