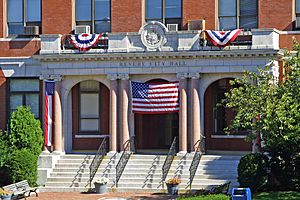 Revere is a city in Suffolk County, Massachusetts, United States, located approximately 5 miles (8.0 km) from downtown Boston. It is named after the American Revolutionary War patriot Paul Revere. As of the 2010 United States Census, the city has a population of 51,755 inhabitants.

Revere borders the towns of Winthrop and Chelsea, and the Boston neighborhood of East Boston to the south, Everett and Malden to the west, Saugus and Lynn to the north, and the Atlantic Ocean to the east. According to the United States Census Bureau, the city has a total area of 10 square miles (26 km2), of which 5.9 square miles (15 km2) is land and 4.1 square miles (11 km2) (40.98%) is water. 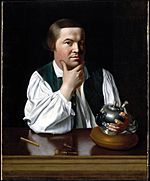 Revere’s first inhabitants were Native Americans who belonged to the Pawtucket tribe and were known as the Rumney Marsh Indians. The leader, or sachem, of the Pawtuckets was Nanepashemet of Lynn. In 1616, an epidemic, probably smallpox, swept the region, killing thousands in its wake. Nanepashemet retired to the Mystic River, in what is now Medford, but was found murdered in 1619 at his fort on the brow of Rock Hill overlooking the river. Three sons succeeded him in his reign. One of them, Wonohaquaham, also called Sagamore John, had jurisdiction over the Native Americans at Winnisemmit (later Chelsea) and Rumney Marsh.

The Native Americans, with their intimate knowledge of the vast, yet unexplored wilderness, often helped the settlers in their struggle to survive. During King Philip's War, the local friendly Native Americans were placed on what is now Deer Island, where many of them perished. Some of them on the island were enlisted to help the colonists defeat the other warring tribes.

Rumney Marsh was originally divided and allotted to twenty-one of Boston's most prominent citizens. By 1639, the original allotments had been consolidated into seven great farms. Farming was the principal industry of Winnisemmet, and Rumney Marsh in particular. On September 25, 1634, Rumney Marsh was annexed to Boston, which had received its name only four years earlier. Winnisemmet and Pullen Poynt (which was later to be known as Winthrop) were also annexed to Boston. The first county road in North America stretched across Rumney Marsh from the Winnisemmet Ferry to Olde Salem in 1641.

In 1739, Rumney Marsh, Winnisemmet and Pullen Poynt were set off from Boston and established as the town of Chelsea. The largest of the three settlements, Rumney Marsh (or North Chelsea) was selected as the Town Center.

In 1775, the area played a role in the American Revolution as the site of the first naval battle, at Rumney Marsh, and other locations.

In 1852, Pullen Poynt seceded from North Chelsea and was established as the town of Winthrop. That same year, Chelsea became its own city. In 1871, North Chelsea changed its name in honor of the great American patriot, Paul Revere, who died in 1818.

On the morning of July 28, 2014, an EF2 tornado touched down in nearby Chelsea and intensified as it entered the city of Revere, causing major damage to many buildings, including the Revere City Hall. Damaged cars, power outages, downed lines and downed trees were reported all around Revere, Chelsea, Winthrop and Boston. It was the first tornado to hit Suffolk County since the National Weather Service began keeping records in 1950.

There were 19,463 households out of which 25.5% had children under the age of 18 living with them, 41.8% were married couples living together, 13.9% had a female householder with no husband present, and 39% were non-families. 32.7% of all households were made up of individuals and 12.4% had someone living alone who was 65 years of age or older. The average household size was 2.41 and the average family size was 3.09.

As of 2010, 27% of the residents of Revere were born outside of the United States. Many of them originate from North Africa, Asia, Europe, and Latin America. The 2010 percentage of foreign born is twice that of 1990. 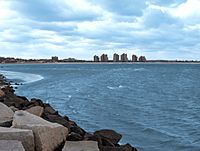 The Beach began to deteriorate in the 1950s and by the early 1970s it had become a strip of honky-tonk bars and abandoned buildings. The Great Blizzard of '78 proved to be the final death knell for the "old" Revere Beach, as many of the remaining businesses, amusements, pavilions, sidewalks, and much of the seawall were destroyed.

The area once boasted an extensive array of amusement rides and attractions. The Whip, the Ferris wheel, Bluebeard's Palace, the Fun House, Hurley's Dodgems, the Pit, Himalaya, Hippodrome, Sandy's, the Wild Mouse, the Virginia Reel and many more provided hours of enjoyment for residents and visitors alike. The biggest attraction was the Cyclone, among the largest roller coasters in the United States. Built in 1925, its cars traveled at speeds of up to 50 miles per hour (80 km/h) and its height reached 100 feet (30 m). Also notable was the Derby Racer racing roller coaster, which had a series of accidents that killed or critically injured riders between 1911 and 1936. Lightning was another roller coaster at Revere Beach, and was a member of Harry Traver's infamous "Terrifying Triplets". In addition, there were two roller skating rinks, two bowling alleys, and numerous food stands. There were also ballrooms, including the most famous, the Oceanview and the Beachview, each the site of many dance marathons which were popular in the 1930s.

The Beach was the focus of a major revitalization effort by the Massachusetts Department of Conservation and Recreation and the City in the 1980s and was officially reopened in May 1992. It now boasts high-rise housing units, a re-sanded beach, restored pavilions, and a renovated boulevard. Revere commemorated the centennial of the first opening of Revere Beach on the weekend of July 19, 1996.

Revere has eight places on the National Register of Historic Places. 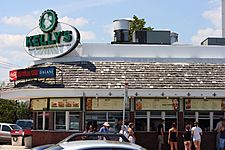 Kelly's Roast Beef is a fast food eatery founded in Revere in 1951. Its main location is along the Revere Beach shoreline. Kelly's claims to have invented the modern roast beef sandwich, saying it was unknown as such before they introduced it in 1951.

Considered the oldest continuously operating candy company in the United States, Necco is best known for its namesake candy, Necco Wafers, its seasonal Sweethearts Conversation Hearts, and brands such as the Clark Bar and Haviland Thin Mints. The company maintains its headquarters at 135 American Legion Highway in Revere, where it offers tours of the facilities.

Wonderland Greyhound Park was a greyhound racing track located in the city owned by the Westwood Group. It was constructed on the site of the former Wonderland Amusement Park. Wonderland opened on June 12, 1935 and formerly offered 361 performances during its 100-day, April to September racing period. Parimutuel wagering was legalized by the Massachusetts Legislature in 1934. The Park opened the following year and offered greyhound racing from June 1935 until September 2009. It ran its last program on September 18, 2009, as a result of a statewide referendum that banned greyhound racing. The future of the land is uncertain.

From 1934 to 1943 murals were produced in the United States through the Section of Painting and Sculpture, later called the Section of Fine Arts, of the Treasury Department. The intended purpose of the murals was to boost the morale of the American people from the effects of the Depression. Competitions that determined commissioned works were open to all artists in the United States. division. Muralist Ross Moffett painted the mural The First Store and Tavern in 1939 at the U.S. Post Office in Revere.

The completion in 1838 of the Eastern Railroad (later the Boston & Maine), and in 1875 of the Boston, Revere Beach & Lynn Railroad, signaled the beginning of rapid population growth for the town and the development of the beach as a summer resort. By 1885, ten years later, the town had increased to 3,637 inhabitants, more than tripling in size over 15 years. By 1890, the population had grown to 5,668.

In 1871, Revere was the site of The Great Revere Train Wreck of 1871, the deadliest railroad incident in Massachusetts history, when the Eastern Railroad's "Portland Express" slammed into the back of a stopped local commuter train at Revere Station.

The MBTA Blue Line terminates in Revere, with stops at Wonderland, Revere Beach, and Beachmont.

All content from Kiddle encyclopedia articles (including the article images and facts) can be freely used under Attribution-ShareAlike license, unless stated otherwise. Cite this article:
Revere, Massachusetts Facts for Kids. Kiddle Encyclopedia.