Malden is a city in Middlesex County, Massachusetts, United States. At the time of the 2010 United States Census, the population was at 59,450 people. In 2009, Malden was named the "Best Place to Raise Your Kids" in Massachusetts by Bloomberg Businessweek. 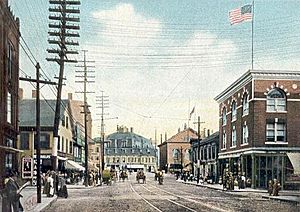 Malden, a hilly woodland area north of the Mystic River, was settled by Puritans in 1640 on land purchased in 1629 from the Pennacook tribe. The area was originally called the "Mistick Side" and was a part of Charlestown. It was incorporated as a separate town in 1649. The name Malden was selected by Joseph Hills, an early settler and landholder, and was named after Maldon, England. The city originally included what are now the adjacent cities of Melrose (until 1850) and Everett (until 1870).

At the time of the American Revolution, the population was at about 1,000 people, and the citizens were involved early in resisting the oppression of Britain: they boycotted the consumption of tea in 1770 to protest the Revenue Act of 1766, and it was also the first town to petition the colonial government to withdraw from the British Empire.

In 1984, Malden came to national renown as the location of the controversial Fells Acres Day Care Center preschool trial.

Malden is bordered by Melrose on the north, Stoneham on the northwest, Medford on the west, Everett on the south, Revere on the east, and Saugus on the northeast. Boojum Rock located in the north west corner of Malden inside the Middlesex Fells Reservation is the highest point in Malden with an elevation of approximately 275 feet. 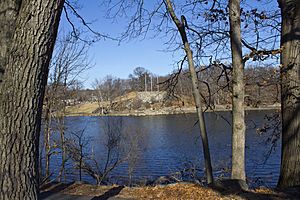 As of 2009 and 2010 immigrants originate from Brazil, China, Haiti, India, Morocco, and Pakistan. The Moroccan American Civic and Cultural Association is located in Malden. 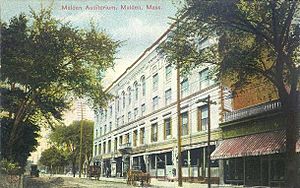 Like many communities in New England, many towns and neighborhoods are organized around squares, which are located at the crossroads and town commons dating back from the colonial times and the early 19th century. Many of the neighborhoods take their name and identity from the main square in their area.

Some of the neighborhoods in Malden include Faulkner (location of the former Suffolk Square) West End, Edgeworth, Linden, Ferryway, Forestdale, Maplewood, Bellrock, and Belmont Hill (located between Bellrock and Ferryway). 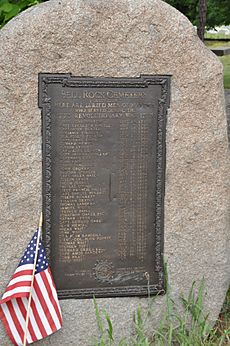 Bellrock is the south central section of the city, bordered by Main Street on the east, Charles Street on the north, the Malden River on the west, and the Everett line on the south. It contains Bell Rock Memorial Park (listed on the National Register of Historic Places) and Bell Rock Cemetery (also listed), which contains marked graves dating back to 1670. Bell Rock Cemetery was called Sandy Bank until the establishment of the Salem Street Cemetery in 1832; it was then known as the Old Burial Ground for half a century until it was renamed in 1882. Also located in this area are the headquarters for New England Coffee.

The Edgeworth neighborhood is the southwest section of the city. It contains Devir Park, Pearl St. Park, and Callahan Park. The city's football stadium, MacDonald Stadium is in Edgeworth. A school in Edgeworth is the former Emerson grammar school. The Converse Rubber Factory and offices once operated in Edgeworth at the bottom of Pearl Street. This is the original home of the Converse "All-Star" Basketball Sneakers. Malden Catholic High School was originally located in Edgeworth on Highland Ave. The school's football team played their home games at Brother Gilbert Stadium, located at Commercial & Medford Streets in Edgeworth. Immaculate Conception Grammar School was located in Edgeworth on the corner of Charles St. and Highland Ave. Edgeworth touches Everett and Medford. Edgeworth is also home to St. Rocco's Feast, SunSetter Awnings and Pisa Pizza.

In 1847, Joshua Webster, president of the Saugus Branch Railroad, purchased 200 acres in Malden along its projected route. Here, he planned a residential development with wide streets and ornamental trees. Due to the hundreds of maple trees Webster planted, the neighborhood became known as Maplewood.

The city is served by the Orange Line subway that connects it to downtown Boston. The city's subway stops are Malden Center and Oak Grove. The MBTA's commuter rail also has one stop in the city (Malden Center) and can stop at Oak Grove if necessary. During the first few years of the 2000s, the MBTA updated signal systems and Orange Line service was replaced by shuttle buses at night. Since September 2007, such service interruptions have been limited to occasional weekends, while signal system repairs necessitated closing off the northern portion of the Orange Line and rerouting passengers via replacement bus service from either the Haymarket subway stop or Wellington Station.

There is a sizable section of the old Boston and Maine Saugus Branch Railroad line running across the middle of Malden. This line is currently owned by the MBTA, but has been out of use since 1993 and has not seen passenger service since 1958. A plan exists to create a bike trail (Bike to the Sea) along the side of these tracks on right-of-way land. Progress was hampered by lack of funds and land encroachment, but is now slated for ribbon cutting in June 3, 2012. The path will be known as the Northern Strand Community Trail.

Bus service to all adjacent communities is also available via the service of the MBTA. 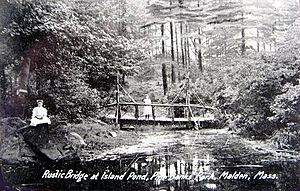 Approximately 30 park sites throughout the city provide a variety of recreational facilities including tennis courts, basketball courts, playgrounds and ballfields. Other sites include a 400-meter synthetic running track at MacDonald Stadium; 56 acres (23 ha) of the Middlesex Fells Reservation; the 25-acre (10 ha) Fellsmere Pond; a DCR-owned-and-operated swimming pool; a 30,000 square feet (2,800 m²) field house built under the new school rebuilding plan; the state-of-the-art Malden YMCA finished construction in early 2007; and Pine Banks Park, operated by a Board of Trustees with equal representation by the cities of Malden and Melrose. Waitt's Mountain is also in Malden.

Other points of interest include the Converse Memorial Library and the Congregation Beth Israel. One of Malden's finest and most notable landmarks is the public library which was designed by Henry Hobson Richardson and built in 1885.

All content from Kiddle encyclopedia articles (including the article images and facts) can be freely used under Attribution-ShareAlike license, unless stated otherwise. Cite this article:
Malden, Massachusetts Facts for Kids. Kiddle Encyclopedia.