The Malden River is a 2.3-mile-long (3.7 km) river in Malden, Medford, and Everett, Massachusetts. It is roughly 675 feet (206 m) wide at its widest point and is very narrow at its smallest point. Its banks are largely occupied by industrial business, and the river is scarcely used or even mentioned. Its water quality is worse than most local waters, including the Mystic River, into which it flows.

Most agree that the river is under-utilized. Projects like Rivers Edge (formerly TeleCom City) hope to promote recreational use of the river's banks. Currently, crew teams, including the Malden High School and the Mystic Valley Regional Charter School, practice on the river because it is never crowded like the Charles River. Also, a state-of-the-art boat house is located on the Malden-Everett line on the west bank of the river, used by the Tufts University rowing team.

The above-ground portion of the Malden River starts behind Canal Street in the southwest corner of Malden, where it is fed by three underground canals (described below). It then flows southward for about 2 miles (3.2 km), forming the border between Medford and Everett before emptying into the Mystic River.

Like the Mystic River, its waters were once brackish and influenced by the tides. The construction of the Amelia Earhart Dam in 1966 has converted it to freshwater and maintained a fairly constant depth.

The Amelia Earhart Dam, situated on the Mystic River below the mouth of the Malden River, converted the Malden River from a brackish, tidal river, to a non-tidal freshwater river when it was constructed in 1966. The dam was more sophisticated than the simple iron gates of the Craddock Locks, which it replaced. It is a permanent concrete structure with three passages to allow boats to pass through. There is a tower where workers observe incoming boats and open the lock accordingly. The dam is equipped with a pump, and is able to pump freshwater downstream even during high tide to prevent flooding. The river flows backwards at times depending on the dam. It was modeled after the Charles River Dam, which is very similar in structure and purpose. Fish passage has been a problem, as there is no working fish ladder there, but workers do leave the locks open at times to allow fish to pass. There is no pedestrian access to the dam.

Three canals converge to form the above ground portion of the river, all located on Canal Street. The first canal is a long straight passageway that is divided into two half sections by a concrete divider. It contains the locks mentioned above.

The second canal is a concrete half circle with a bridge over it. It is surprisingly deep at about 230 feet (70 m). This canal is a gathering spot for spawning alewife and the stripers that follow them.

The third canal is structured like the first, except it is much shorter and lacks any locks. This canal is where the actual river continues underground.

Despite its poor water quality, the Malden River is home to many fish. Most prevalent is the carp, which exists in great numbers and can often be observed basking near the surface. Carp are not native to the Malden River, having been introduced to the river in the 19th century. They have thrived and exist in most waters across the country. Despite their poor reputation as a dirty bottom feeder, they are an excellent sportfish to those who can throw away any preconceived notions about them. They can be caught from the Malden River with simple food baits—such as corn or bread—on the bottom of the river.

Another fish is the alewife and its cousin, the blueback herring, collectively known as river herring or simply herring. Both migrate from the ocean into the fresh water of the Malden River every spring to spawn. Striped bass, a prized saltwater fish, also come in from the ocean to spawn and prey on the herring. Other fish, like bluegill, largemouth bass, and catfish, are less common. 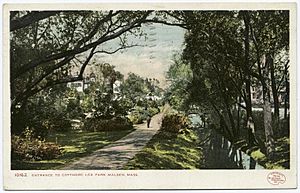 The Native Americans and settlers used the Malden River for recreation and commercial purposes. Alewife and blueback herring were once caught in this river with nets and used for consumption. Shipbuilding also occurred along the Malden River.

The Malden River was once a brackish river with salt marshes lining its banks. It was also originally connected to Ell Pond and was fed by Spot Pond Brook, which connected to Spot Pond. The portion of the river before its current beginning, and into which Spot Pond Brook emptied, was sometimes known as Spot and Ell Pond Brook. Others just referred to it as the Malden River. This portion was prone to flooding and contained a few small ponds. Its other sources included several small creeks that have since been covered or replaced by drainage pipes and culverts. One of these creeks flowed along the old Boston and Maine Railroad Saugus Branch tracks and was called B&M. The second one is Townline Brook Canal (aka the rat trails), which now terminates near Broadway. Townline Brook empties into the Pines River now at the Linden end of Malden. One brook called Shilly Shally is west of Washington Street in Melrose and only flows during the spring. It cascades from the Middlesex Fells Reservation in an amazing waterfall only be channeled underground to Spot and Ell Pond Brook.

Near the present-day post office, there is a park called Coytemore Lea. The river once flowed through this park. It was decorated with bridges, waterfalls and flowers. The river has been covered up, but the park still remains.

The Revere Beach Parkway crosses the river on a 1954 bascule bridge, known as the Woods Memorial Bridge, which has not opened for river traffic in over 30 years. MassDOT expects to replace this bridge, which has a 10-ton weight limit, with a fixed span beginning in summer 2014.

Sports on the river

Rowing is a very common sport along the Malden River. There are currently four teams who use the river for practice and for races. The original team of the Malden River was Tufts University. They started off in a tarp-like tent, but in 2005, they moved into a modern boathouse a little farther down the river. The crew teams of Mystic Valley Regional Charter School and Malden High now use the original Tufts boathouse. Gentle Giant Rowing, whose boathouse, also home to the Wentworth Institute of Technology team and the joint Somerville-Everett High School team, is on the connected Mystic River, also practices on the Malden River. Motorboats and anglers are also seen; swimming is not common on the river due to a bacteria counts above standards for swimming.

All content from Kiddle encyclopedia articles (including the article images and facts) can be freely used under Attribution-ShareAlike license, unless stated otherwise. Cite this article:
Malden River Facts for Kids. Kiddle Encyclopedia.