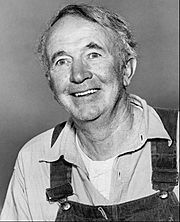 Walter Andrew Brennan (July 25, 1894 – September 21, 1974) was an American movie, television, and stage actor. He was in the TV series The Real McCoys. He is tied with Jack Nicholson for the actor winning the most Academy Awards.

Brennan was born in Lynn, Massachusetts on July 25, 1894 and studied at Rindge Technical High School. He was married to Ruth Wells from 1920 until his death in 1974, they had three children. He died on September 21, 1974 in Oxnard, California from emphysema, aged 80.

All content from Kiddle encyclopedia articles (including the article images and facts) can be freely used under Attribution-ShareAlike license, unless stated otherwise. Cite this article:
Walter Brennan Facts for Kids. Kiddle Encyclopedia.