Marshlands Conservancy is a 147-acre nature preserve in the city of Rye that is 100% owned and operated by Westchester County Parks. It has numerous wildlife habitats from ponds to creeks to a large meadow area, succession forest, freshwater wetlands and the only extensive salt marsh in Westchester. It borders Long Island Sound and can be entered via an easement on the historic Boston Post Road. It is one of 5 properties that together constitute the Boston Post Road Historic District. It has high archaeological sensitivity. The conservancy has also been designated an Important Bird Area

Archaeology supports the presence of a vibrant Paleo-Indian population for thousands of years at the location. Findings include identification of pre-contact deposits from the Archaic and Woodland periods. 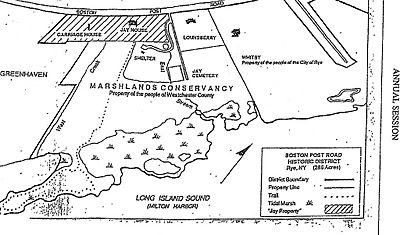 Prior to its 20th century partitioning, the Conservancy was originally land belonging to two neighboring estates: the Jay Estate, owned by Founding Father John Jay and his descendants and neighboring Lounsbury owned by the Parsons family. The nature preserve, first named the Devereux Reservation, came into being through two separate real estate donations in 1966 and again in 1977.

A small shelter was built in 1972 and the property re-opened as Marshlands Park on June 7, 1972 during the dedication of the preserve. A special volunteer Advisory Board was created to ensure continued oversight of the County's management of the land.

Another donation of 17 acres was contributed by Fanny Wickes Parsons in 1977 with the caveat "that no garages or maintenance buildings be erected and that no marinas be built on or near the shorefront of the tract."

The ensuing property of 147 acres [59 ha] (which includes tidal lands) was rededicated in 1997 as passive parkland by the Board of Legislators of Westchester County "The natural area and wildlife sanctuary will be protected, preserved and regulated as a nature and wildlife preserve to be used only for passive recreation." That same year, a Friends group was organized to help staff the shelter and provide tours as well as raise additional funds to supplement the maintenance and mowing of the meadow.

A 1985 report confirmed the importance of Rye Marshlands as one of two sites in Rye with high archaeological significance, the other being an area in the Blind Brook watershed. The discovery of 88 stone fishtail points and fragments, 31 of which were collected between 1981 and 1987 by Stuart Fiedel, further suggests encampments of what is known as an Orient phase or culture at the site. Additional artifacts were found by Wilbur Clark.

The preserve's salt marsh was recognized in 1987 as a rare ecosystem and tidal flats community by the N.Y.S. Department of State Division of Coastal Resources & Waterfront Revitalization.

There are two trail loops. One is 2.8 miles long. Passive recreation only is permitted at Marshlands Conservancy including walking, hiking and birdwatching. Dogs and bikes are strictly forbidden according to regulations adopted on December 31, 1975. Ruins of a summer home built on the property by 20th century owners can be found on the trail alongside the water. All that remains is a chimney and stone foundation.

The East Stream and West Creek are two watercourses that run through the Marshlands Conservancy.

Marshlands Conservancy is home to many creatures from horseshoe crabs to coyotes. Visitors can see foxes, herons, egrets and more. Nature study is especially focused on salt water life.

The Conservancy land was donated with the goal of creating a wildlife sanctuary especially for waterfowl and migratory birds. Over 230 species of birds have been spotted from Black rail to American Avocet

Marine life at Marshlands include pipefish, small crabs (often hidden in rocky structures off of the water), and killifish.

Deer, fox, coyotes, rabbits and groundhogs are among the mammals that have habitats at the conservancy.

Native plants historically found at the Conservancy include lopseed, marshmallow, and butterfly weed.

Like many other sanctuaries that are impacted by climate change, the ecology of Marshlands is changing due to the aggressive pressure of invasive species. Non-native threats include mugwort, Japanese knotweed, Japanese stiltgrass, jetbead, multiflora rose, wineberry, Norway maples and garlic mustard.

Asian shore crabs have been implicated in the decline of the common periwinkle at Marshlands.

All content from Kiddle encyclopedia articles (including the article images and facts) can be freely used under Attribution-ShareAlike license, unless stated otherwise. Cite this article:
Marshlands Conservancy Facts for Kids. Kiddle Encyclopedia.