The Bronx River, approximately 24 miles (39 km) long, flows through southeast New York in the United States and drains an area of 38.4 square miles (99 km2). It is named after colonial settler Jonas Bronck. The Bronx River is the only fresh water river in New York City.

It originally rose in what is now the Kensico Reservoir, in Westchester County north of New York City. With the construction of the Kensico Dam in 1885, however, the river was cut off from its natural headwaters and today a small tributary stream serves as its source. The Bronx River flows south past White Plains, then south-southwest through the northern suburbs in New York, passing through Edgemont, Tuckahoe, Eastchester, and Bronxville. It forms the border between the large cities of Yonkers and Mount Vernon, and flows into the northern end of The Bronx, where it divides East Bronx from West Bronx, southward through Bronx Park, New York Botanical Garden, and the Bronx Zoo and continues through neighborhoods of the South Bronx. It empties into the East River, a tidal strait connected to Long Island Sound, between the Soundview and Hunts Point neighborhoods.

In the 17th century, the river—called by the natives "Aquehung"—served as a boundary between loosely associated bands under sachems of the informal confederacy of the Wecquaesgeek, Europeanized as the Wappinger; the east bank of the river was the boundary for the Siwanoy, clammers and fishermen. The same line would be retained when manors were granted to the Dutch and the English. The Algonkian significance of the name is variously reported; the acca- element, as represented in the Long Island place-name Accabonac, was deformed into the more familiar, suitably watery European morpheme aque-.

The tract purchased by Jonas Bronck in 1639 lay between the Harlem River and the river that came to be called "Bronck's river". 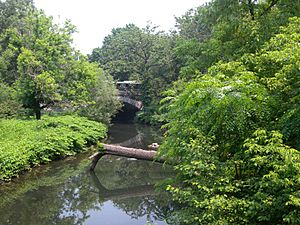 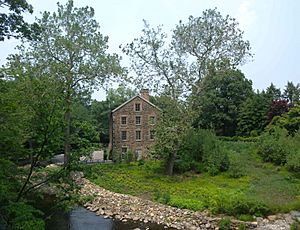 During the 19th and 20th centuries, the river became a natural sewer into which industrial waste was poured every day. An early mill on the industrialized river was the Lorillard Snuff Mill, preserved in the grounds of the New York Botanical Garden. With the decline of manufacturing in the area, the river continued to receive water pollution from the communities that lined its banks. In December 1948, flow of the Bronx River was changed to eliminate a curve in its course in Bronxville, to create land in the old riverbed on which to construct an addition to Lawrence Hospital. During the excavations a large sand bar was uncovered where sand had accumulated at the bend over hundreds of years and made a sandy beach.

In the 21st century, environmental groups including the Bronx River Alliance proposed to return the river to its original state as a clean waterway. The river became a favorite project of U.S. Representative José Serrano, who secured US$14.6 million in federal funding to support the rehabilitation of the waterway, into which some Westchester towns continued to discharge raw sewage intermittently, as sanitary sewer overflows, as late as 2006. Under a November 28, 2006 agreement, the municipalities of Scarsdale, White Plains, Mount Vernon and Greenburgh agreed to stop dumping sewage in the Bronx River by May 1, 2007.

Urban runoff pollution continues to be a serious problem for the river. The Bronx River Watershed Coalition, a partnership of local and state agencies, citizen groups and non-profit organizations, have developed watershed management plans to reduce stormwater pollution and improve water quality. 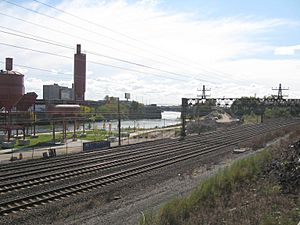 A rail line runs along the river 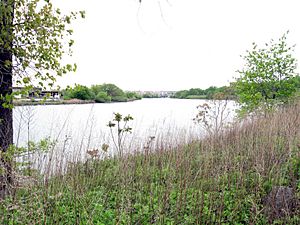 The Bronx River near its mouth 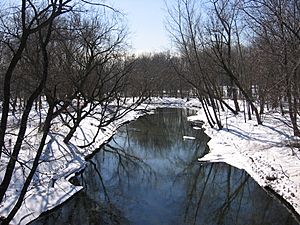 The river in winter

Local alewife, taken from a coastal tributary in nearby Connecticut, were released in the river in March 2006. The alewife were expected to spawn in the river's headwaters. Their offspring would spend the summer in the river, migrate out to sea in the fall, and in three to five years return, like all anadromous fishes, to their spawning grounds. Stocking was intended to be repeated annually for the following five years, to build up the new resident population. The fishes, among a group called "river herring," feed low on the food-chain and help reduce eutrophication. And in fact, several adult alewife were found below the first dam on the river on April 7, 2009. As an analysis revealed they were 3 years old, the assumption of scientists is that these were in fact descendants of the alewife released 3 years before in March 2006. The next step will be to erect fish ladders over the 3 dams lowest on the river, allowing the alewife access to a portion of the river with more suitable spawning habitat.

In February 2007 biologists with the Wildlife Conservation Society, which operates the Zoo, spotted a beaver (Castor canadensis) in the river. "There has not been a sighting of a beaver lodge or a beaver in New York City for over 200 years. It sounds fantastic, but one of the messages that comes out of this is if you give wildlife a chance it will come back," said John Calvelli, a spokesman for the Society. The beaver is named Jose Serrano, after the Congressman, and was sighted below the East Tremont bridge at Drew Gardens as recently as June, 2009. Beaver had not lived in New York City since the early 19th century when trappers extirpated them completely from the state. In the summer of 2010 a second beaver joined Jose, doubling the beaver population in New York City. Beaver were once important to the city's economy and pair of beaver appear on the city's official seal and flag. 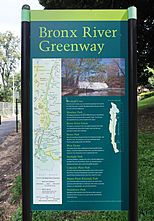 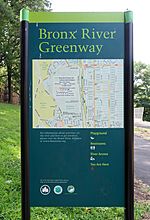 Along much of its length in Westchester County and the northern Bronx the river is paralleled by the Bronx River Parkway and its associated bicycle path from Bronxville to the Kensico Dam plaza. A project, the Bronx River Greenway, proposes a unified management plan for the narrow ribbon of riverside green spaces in the 8 miles (13 km) stretch of river that passes through Westchester County and the Bronx, as part of the East Coast Greenway. It includes Concrete Plant Park on the right bank, below Westchester Avenue and Starlight Park above there. Construction on the Bronx River Greenway started in October 2016.

In the southern Bronx, the river has become a popular destination for urban canoeing in New York City. It also bisects Bronx Park and the Bronx Zoo. A monorail built in the late 20th century takes Zoo customers over the river to an exhibit of Asian animals on the left bank, with a narration presenting the river as the Irrawaddy.

All content from Kiddle encyclopedia articles (including the article images and facts) can be freely used under Attribution-ShareAlike license, unless stated otherwise. Cite this article:
Bronx River Facts for Kids. Kiddle Encyclopedia.