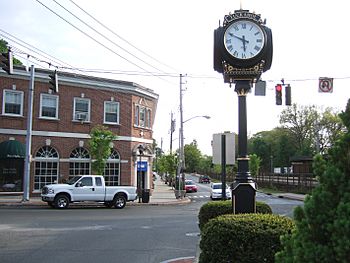 Tuckahoe is a village in the town of Eastchester in Westchester County, New York, United States. One-and-a-half miles long and three-fourths of a mile wide, with the Bronx River serving as its western boundary, the Village of Tuckahoe is approximately sixteen miles north of midtown Manhattan in Southern Westchester County. As of the 2010 census, the village's population was 6,486.

The village can be reached by the Metro-North railroad system. The Tuckahoe and Crestwood stations are 32 minutes and 34 minutes from New York City's Grand Central Terminal, respectively. 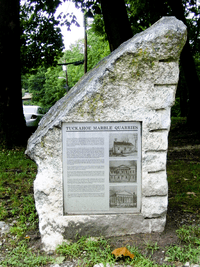 The name “Tuckahoe," meaning “it is globular," was a general term used by the Native Americans of the region when describing various bulbous roots which were used as food. Throughout the 1700s and 1800s, Tuckahoe was a rural, minor community which was part of the larger town of East Chester. It wasn't until the early nineteenth century that Tuckahoe first became a semi-prominent part of the New York Metropolitan Area upon the discovery of vast, high-quality, white marble deposits near the Bronx River by Scottish businessman Alexander Masterson. Through the use of his financial wealth and influence, Masterson jump-started Tuckahoe's marble industry, opening the first marble quarry in 1812. The extremely high quality of "Tuckahoe Marble" was in great demand, quickly transforming the once quiet village into the "marble capital of the world". In the 1840s, to serve quarry owners who transported marble to the city, the New York and Harlem Railroad opened two train depots in Tuckahoe. The booming industry drew succeeding waves of German, Irish and Italian immigrant workers, and, after the Civil War, African-Americans who migrated from the South. The Tuckahoe quarries produced heavily for almost a century before supplies dwindled and the industry shut down. The Church of the Immaculate Conception was constructed for the predominantely Catholic population using Tuckahoe Marble.

In the 1920s Burroughs Wellcome (now part of GlaxoSmithKline) established research and manufacturing facilities on Scarsdale Road on land acquired from the Hodgman Rubber Company, and for many years was a leading industry in Tuckahoe until the company moved to Research Triangle Park in North Carolina in 1971. The Nobel Prize winning scientists Gertrude B. Elion and George H. Hitchings worked there and invented drugs still used many years later, such as mercaptopurine.

According to the United States Census Bureau, the village has a total area of 0.6 square miles (1.6 km2), all of it land.

There were 2,627 households out of which 30.3% had children under the age of 18 living with them, 47.0% were married couples living together, 11.9% had a female householder with no husband present, and 38.1% were non-families. 33.0% of all households were made up of individuals and 10.2% had someone living alone who was 65 years of age or older. The average household size was 2.36 and the average family size was 3.05.

All content from Kiddle encyclopedia articles (including the article images and facts) can be freely used under Attribution-ShareAlike license, unless stated otherwise. Cite this article:
Tuckahoe (village), New York Facts for Kids. Kiddle Encyclopedia.